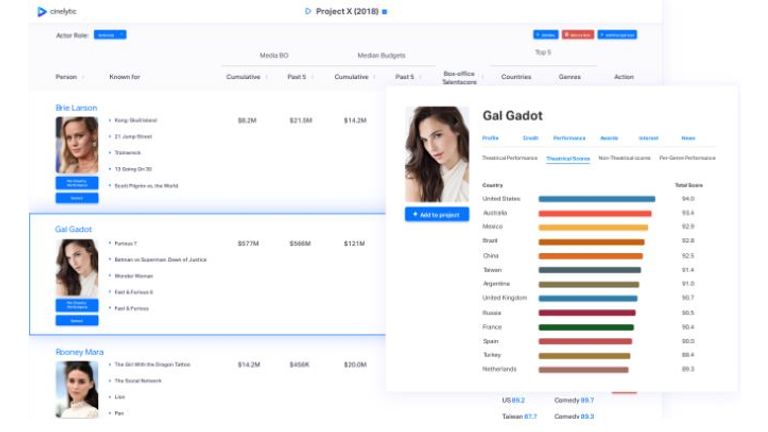 Warner Bros are going to start using artificial intelligence (AI) to help predict how successful their films could be.

The platform will allow them to test profitability outcomes depending on different factors including casting, distributor and release date.

The studio - which is one of the "big six" in Hollywood - has signed a deal with LA start-up Cinelytic to use their project management system, according to The Hollywood Reporter.

The forecasting tool was launched last year and offers a unique set of industry insights. according to Cinelytic's website.

It claims the platform is able to accurately predict box office returns using a variety of data.

One function allows users to see how casting certain actors in roles would affect the film's profitability.

The company uses the example of Wonder Woman Gal Gadot in its demonstration image, and says it uses its own trademarked economic scoring system called "TalentScores".

It says the system "ranks talent by their economic impact across the film industry, including by media type, genre, and key territories".

Different distributors and release scenarios can also be played out to test results.

The company has been testing their platform for around three years.

Mr Queisser, who studied in London, told The Hollywood Reporter: "The system can calculate in seconds what used to take days to assess by a human when it comes to general film package evaluation or a star's worth."

Despite the platform's capabilities, he says it will never replace humans as far as creative spark is concerned, explaining: "Artificial intelligence sounds scary. But right now, an AI cannot make any creative decisions.

"What it is good at is crunching numbers and breaking down huge data sets and showing patterns that would not be visible to humans. But for creative decision-making, you still need experience and gut instinct."