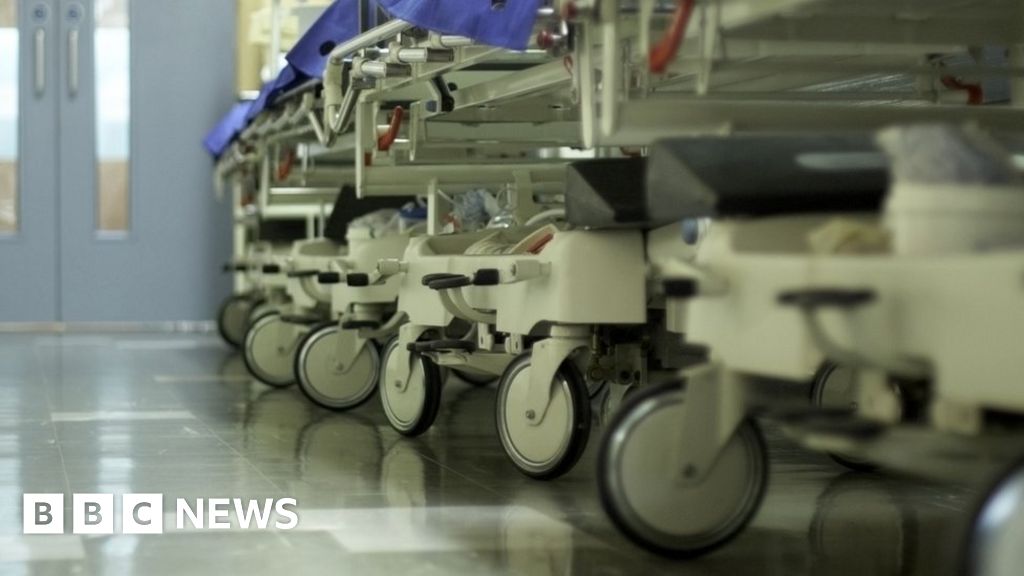 Huge pressures at hospitals across the NHS over the last month have led to long delays for patients seeking emergency care, figures suggest.

The NHS England December data showed record delays in A&E with one in five patients waiting more than four hours.

A key problem seems to have been a shortage of beds on wards.

The figures show nearly 100,000 of the sickest patients faced hours stuck on trolleys and waiting in corridors while beds were found for them.

Some hospitals were even forced to introduce emergency protocols and turn away walk-in patients deemed not to need immediate help.

How bad has it been?

December was certainly the worst month since the four-hour target was introduced.

Performance has been getting gradually worse over the autumn - October and November saw record worst levels set as well.

The number of patients who then need to be admitted on to the ward and faced long delays also hit a new worst level.

There were 98,500 patients who faced a so-called "trolley wait" of a further four hours.

That is nearly one in four of the patients who needed to be admitted.

These "trolley waits" can be in corridors or temporary waiting areas, either in A&E or just outside.

Patients who are admitted are often the sickest of those who attend A&E.

But it is not just A&E units that are struggling. The waiting time targets for cancer treatment and routine operations, such as knee and hip replacements have also been missed.

What is the cause of the pressures?

Hospital bosses acknowledged it had been one of the most difficult months they had seen.

There are a variety of reasons behind the problems.

He said it had mainly been a combination of older patients and children, who seemed to have been particularly hard hit by flu and respiratory problems.

But he also said the social care system in the community, which hospitals rely on to discharge patients into, seemed to have been struggling more than it was last year.

"Keeping people safe has been our main priority. There is significant pressure, not just in this hospital, but across the NHS system as a whole," he said.

The extreme measures being taken

Ambulance crews have been reporting severe pressures, with the number of hours lost queuing outside A&E units waiting to handover patients to hospital staff rising.

A number have taken paramedics off ambulances and deployed them to manage the queues in attempts to keep delays to a minimum.

There have been reports of some hospitals ordering staff not to talk to journalists about the mounting pressures.

Routine operations have been cancelled in many places in an attempt to relieve the pressure on wards.

In the most under-pressure hospitals, emergency protocols have seen A&E units refusing to treat walk-in patients so they can focus on patients brought in by ambulances.

And in the West Midlands, ambulance bosses have ordered crews to avoid taking care home residents in Worcestershire and Shropshire to local hospitals unless it is an absolute emergency because of the "extreme difficulties" being experienced.

The picture across the rest of the UK

The difficulties have not just been confined to England either.

In recent days, the Hywel Dda health board, which is in charge of services in west Wales, said it had had to cancel planned surgery at a number of local hospitals because of the "challenging" situation.

The British Medical Association said services across the nation had been stretched, with some reports cancer surgery had had to be cancelled too.

The four-hour performance figures for December will not be released by the Welsh government until later in the month.

Scotland's figures are not available yet for the festive period either although November was one of the worst months on record.

Meanwhile, in Northern Ireland, which has the worst record when it comes to A&E delays, there is concern that on-going strikes by nurses will have exacerbated the winter pressures.

While A&E departments have remained running during the strikes, the second round of which took place this week, there have been reports that hospitals have struggled to discharge patients quickly enough.

This has a knock-on effect of causing delays admitting patients.

According to the latest figures, which date back to September, a third of patients were waiting longer than four hours in A&E, which was twice as bad as the situation in England and Scotland during that month.