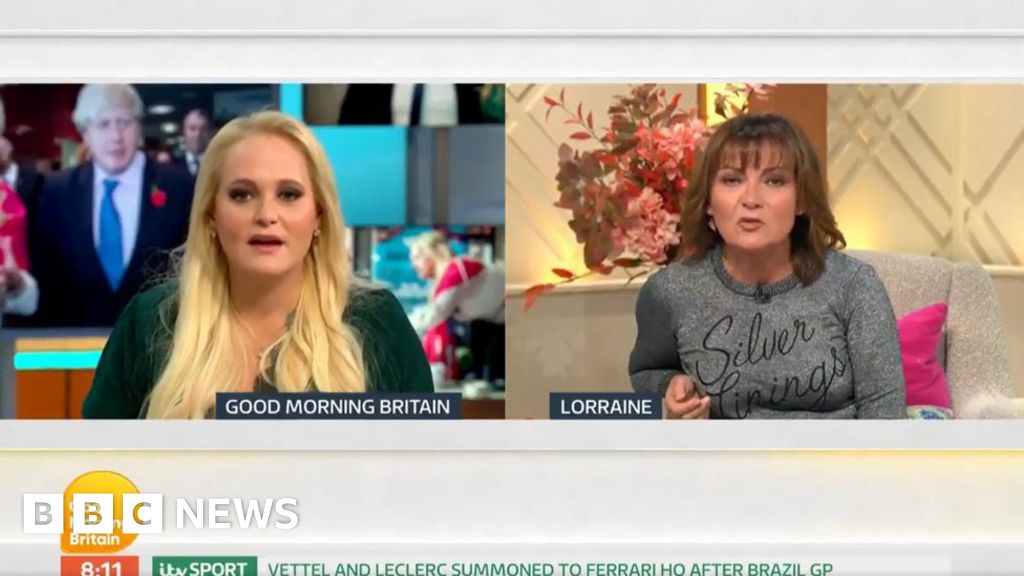 Jennifer Arcuri has said ITV presenters "ganged up" on her during an appearance on Good Morning Britain.

The US businesswoman is at the centre of a misconduct controversy involving Prime Minister Boris Johnson.

After an interview on GMB on Monday, Ms Arcuri was challenged by Lorraine Kelly, who presents the following show.

"What's the point of you coming on TV to clear the air and then you don't say anything?" Kelly asked her during the handover between the two programmes.

It is alleged that Ms Arcuri received favourable treatment during Mr Johnson's time as mayor of London due to their friendship, which he denies.

Kelly suggested she had not properly answered the questions from GMB hosts Piers Morgan and Susanna Reid. "I believe I said a few things," Ms Arcuri responded. "What is it you're looking for that I should say?"

"Well you didn't answer any of the questions that were put to you, and I don't really see the point of you coming on, to be honest," said Kelly.

The clip was quickly uploaded online and Kelly began trending on social media.

Speaking to the Victoria Derbyshire programme on BBC Two later on Monday, Arcuri said: "Did you see the way they ganged up?

"The fact that I'm called out on GMB, 'Why am I here if I'm not here to admit the affair?' Well wait a minute, I'm not allowed to be upset?"

Kelly's intervention surprised many as it followed comments she made last week where she encouraged people to be kinder.

She told the Press Association: "Sometimes we [our show] are dismissed as being a bit fluffy. I don't mind that."

Referring to political divisions, she added: "What we try to do is bring people together, and that's quite hard right now. One thing we can do is try and be kinder to one another."

A spokesperson for GMB has been contacted for comment.

'An iron fist in a velvet glove'

For a broadcaster who very rarely ruffles feathers, Lorraine Kelly has hit the headlines a lot this year.

But her clash with Ms Arcuri is different to the one she had with Conservative MP Esther McVey in June.

Back then, Kelly explained that she was frustrated with the current political discourse in the UK and objected to McVey's voting record on LGBT rights.

Her disapproval of Ms Arcuri, however, was making a more journalistic point about the frustration presenters often feel when a guest agrees to be interviewed but then doesn't seem willing to answer the most pressing questions.

Kelly's Good Morning Britain colleague Piers Morgan has previously described her as "an iron fist in a velvet glove" - a description she has endorsed.

While she is unwaveringly polite to guests on her own show, the GMB/Lorraine handover is a particular danger zone when it comes to moments where Kelly feels she can speak more freely.

Her latest comments have delighted social media users, some of whom suggest these moments are when we see the "real Lorraine Kelly".

The jokes about her having an on-screen persona have followed Kelly since a judge ruled earlier this year that she is playing a particular version of herself on air, meaning she could be considered a "theatrical artist".