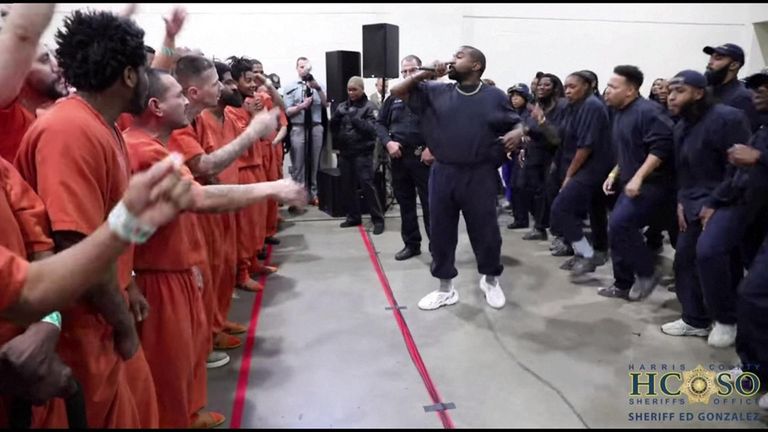 Never mind dancing to the jailhouse rock, Kanye West moved some inmates to tears during a surprise show at a prison in Texas.

Almost everybody in the whole cell block at Harris County jail were treated to a performance by the rapper, who reportedly turned up for an exclusive presentation for 200 selected prisoners and staff at the facility.

West shared tracks from his new gospel album Jesus Is King during his visit, with a number of people in the audience seen welling up in a video released by Harris County Sheriff's Office.

The 42-year-old performed with the backing of a choir, and then moved on to another facility across the street where a smaller selection of female inmates were treated to a show.

West was said to have used a secret tunnel to get to the site of his second concert on Friday, which were kept secret from the public and organised with the approval of prison officials.

Harris County Sheriff Ed Gonzalez said representatives of the music star got in touch about doing the performances, which were reminiscent of jailhouse concerts given by country singer Johnny Cash in California.

Cash performed twice at Folsom State Prison in January 1968 and the 17 total tracks from the shows were later released as part of a live album titled At Folsom Prison.

Unlike At Folsom Prison, Jesus Is King has received a mixed critical reaction since its release earlier this week.

The album, which suffered two delays before finally coming out, holds an average score of just 55 on the reviews aggregation website Metacritic - although it does have its fans.

British music magazine-turned-website NME gave the album - billed by West as "an expression of the gospel" - a four star review and said it was a step-up from the 2018 release dubbed Ye.

It has also been praised by members of the Christian community - and West is due to speak about the album during a trip to the vast 17,000-seat Lakewood Church in Houston on Sunday.

The album opened at number one on the US Billboard 200, giving West - who is one of the most successful and influential artists of the 21st century - his ninth consecutive album to debut atop the rankings.

It remains to be seen whether Jesus Is King enjoys any awards success, potentially helping West - who shares four children with his reality TV star wife Kim Kardashian West - add to a haul that already includes 21 Grammys.