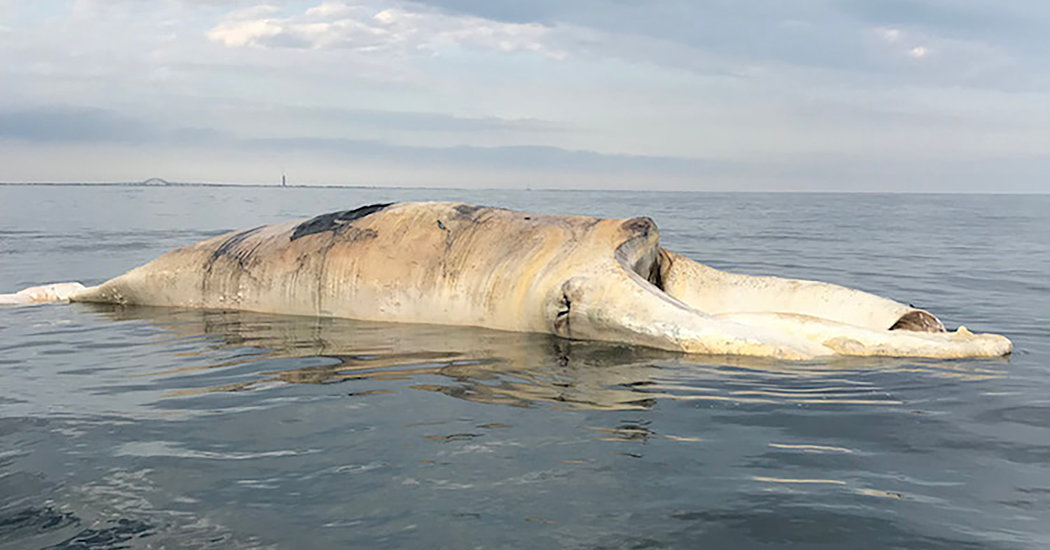 Marc Palombo has been fishing lobster for 41 years, and he wants fishermen who come after him to be able to do the same. That’s why he’s testing a new type of fishing gear that, along with other efforts in New England and Canada, is being designed to avoid harming North Atlantic right whales.

The number of North Atlantic right whales, one of the world’s most endangered large whale species, has declined from about 500 in 2010 to about 400 in 2019. This year, about 10 have been found dead, but that number is uncertain.

Not one of the nearly 30 right whale deaths in the last three years has been attributed to natural causes, said Philip Hamilton, a research scientist with the New England Aquarium, which maintains a catalog of North Atlantic right whales. Mr. Hamilton blames climate change, which has driven the whales northward in search of food.

Over the last decade, warming in the Gulf of Maine has driven zooplankton, which the whales feed on, northward into Canada’s waters. As the whales follow, they are swimming across fishing and shipping lanes in the Gulf of St. Lawrence, where they are vulnerable to being struck by ships or entangled in fishing lines — often long lines of rope connecting buoys at the surface with traps at the bottom.

“The only way to save the right whale is to have all stakeholders, including industry, at the table collaborating on proactive solutions that will protect them while ensuring the future of the lobstering industry,” Patrick Ramage, director of Marine Conservation, for the International Fund for Animal Welfare (IFAW) said in a statement.

Fishermen, like Mr. Palombo, and others have been testing new equipment, like ropeless gear, to protect the passing whales, and their fishing livelihood.

In September, the body of a male right whale, named Snake Eyes, was found floating off Long Island. The whale, which had two white scars on the front of its head that looked like eyes, had been tracked since 1979, although his exact age was unknown. He most likely got tangled in fishing gear, according to the necropsy results released this week.

“We know that entanglements in fishing gear and collisions with ships are killing these ocean giants,” Megan Jordan, spokeswoman for Oceana, an international advocacy and conservation organization, said via email. “Reducing the amount of vertical lines from fishing gear in the water and requiring ships to slow down can help save North Atlantic right whales from extinction.”

A bipartisan bill, the SAVE Right Whales Act, is making its way through Congress. The bill would create a grant program to promote collaborations that aim to reduce human impacts on right whales. It also requires government surveys of plankton to better understand changes to the whales’ food supply.

Advocates have called for more action from the United States and Canada. But finding solutions takes time, ingenuity and money.

In Canada, a multipronged effort to protect the North Atlantic right whales is underway. After 17 whales were killed in the 2017 fishing season, including 12 in Canada’s waters, the Canadian government initiated a three-year research project.

Philippe Cormier, president of Corbo Engineering, runs part of the project that explores different ways to protect the whales, which include:

For example, snow crab fishermen in the Gulf of St. Lawrence use rope that can withstand 14,000 pounds of force, Mr. Cormier said. His team is testing rope that breaks below 1,700 pounds, a weight that would allow a whale to free itself.

Mr. Cormier’s team has one more year of work before reporting their findings to the federal government in Canada.

Planck Aerosystems, a San Diego-based company, is experimenting with drones in Canada that can locate whales and warn nearby ships to slow down. Currently, to track whales, trained experts crisscross areas, like Cape Cod Bay and the Gulf of St. Lawrence, leaning out the windows of low-flying small planes, hoping to see the mammals.

In Massachusetts, the New England Aquarium recently announced a collaboration with the nonprofit engineering firm Draper to watch for whales from low-altitude satellites. The two have pledged a combined $1 million to “engineer new capabilities to monitor the numbers and types of large animals at the ocean’s surface,” according to a news release from Draper.

The Maine Lobstermen’s Association recently pulled out of an agreement to reduce the number of fishing ropes in the water by 60 percent. The association’s executive director, Patrice McCarron, said the deal treats Maine lobstermen unfairly, because their fishing gear has not been the cause of any of the whale deaths in the last five years. She also said almost 30,000 miles of floating rope have been replaced with line that sinks.

Mr. Palombo and collaborators at the New England Aquarium are testing a ropeless system that would leave lobster pots attached to a spool of rope at the bottom of the sea rather than to a buoy on the surface. A few days after setting his pots during a testing, Mr. Palombo headed back to the area and pushed a button on his boat that sent an audio signal to the spool. The rope rose to the surface where it took only a few minutes to retrieve.

“It’s pretty gratifying,” he said about testing the ropeless system. “We’re the adventurers, we’re the people that are breaking the ground.”

The ropeless technology is not as efficient as hauling the lobster pots up from buoys, he said, but he’s O.K. with adding a bit more effort and time to his workload, at least for the first generation of ropeless technology, in hopes of saving the whales and his own way of life.

“How we’re fishing today, if we’re going to save these right whales, isn’t how we’re going to be fishing tomorrow. There are going to have to be changes,” he said, adding that fishermen like himself also want to protect these “unbelievable” creatures that light up a day at sea. “They have a right to live in that ocean, too,” Mr. Palombo said. “We’ve got to find a solution, so that they’re not being killed, they’re not suffering.”