Saudi Aramco Sets Its Market Value at Up to $1.7 Trillion 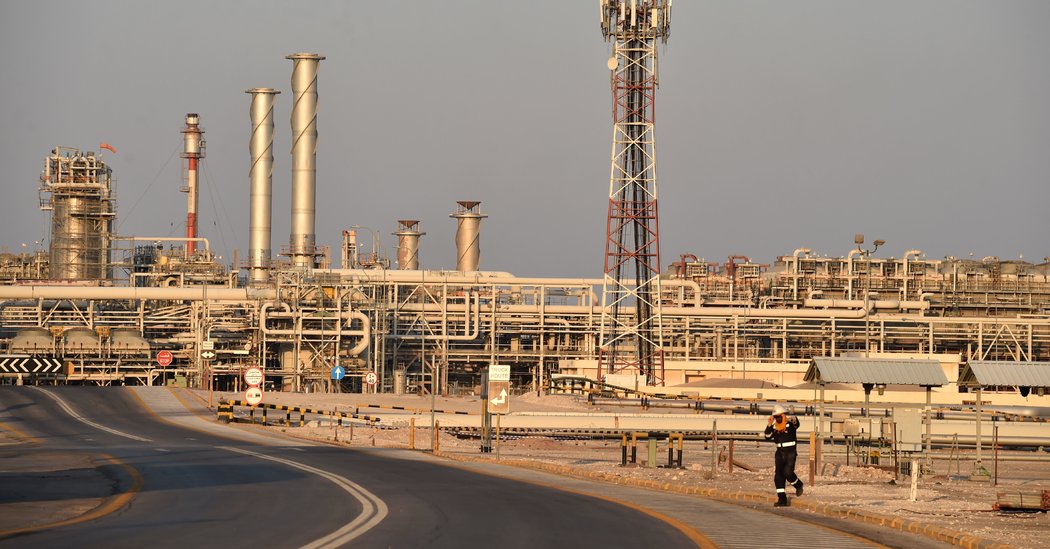 Saudi Aramco Sets Its Market Value at Up to $1.7 Trillion

Saudi Aramco, the world’s largest oil company, offered more details on the enormous share offering it is planning for December, setting an overall market value of the company of as much as $1.7 trillion, a figure short of the $2 trillion initially estimated by Crown Prince Mohammed bin Salman.

Still, the company could raise close to $26 billion when it offers shares to the public, a total that could make it the largest initial public offering ever.

Aramco said in a statement that the offering price for its shares would be between 30 and 32 riyals, or about $8 to $8.50 per share, and that 1.5 percent of the company, amounting to three billion shares, would be sold. That would set the value of the company between $1.6 trillion and $1.7 trillion.

Aramco said that it would publish the final price on Dec. 5. Trading on the Riyadh stock market, the Tadawul, is expected to commence around Dec. 12.

The I.P.O. could eclipse the amount generated by the Chinese e-commerce giant Alibaba on the New York Stock Exchange in 2014. The company raised nearly $22 billion on its first day of trading, and within a few days that figure reached about $25 billion.

Neil Beveridge, an analyst at Bernstein, a market research firm, said on Sunday that the price range being set by the Saudis was “above what we consider a fair price for the company and above what many institutional investors consider a reasonable price.” Bernstein pegs the company’s value at $1.2 trillion to $1.5 trillion, although other analysts have estimated that it’s higher.

Mr. Beveridge said Aramco seemed to be prioritizing a high valuation through sales to individual Saudi investors, who may be willing to pay a higher price for a national champion, and, possibly, sovereign wealth funds of friendly countries, rather than putting a larger portion of shares to a wider market.

Publication of the offer range is another milestone in what has been an agonizingly slow process since Prince Mohammed, Saudi Arabia’s de facto ruler, first broached the idea making the crown jewel of the Saudi economy a public company more than two years ago. After big early promises, the Saudis have recently taken a more cautious approach, restricting the listing initially to Saudi Arabia, avoiding the more rigorous disclosures that would be required in New York or London.

Aramco is enormously profitable, earning net income of $111 billion in 2018, but the company will be selling shares in a tough environment. Oil companies are out of favor with investors, who worry that concerns about the role of fossil fuels in climate change will eventually curb demand for Aramco’s large reserves of oil and gas.

Last week, the International Energy Agency forecast that world oil demand would flatten out in the 2030s, thanks to increasingly efficient car engines and rising use of alternative energy sources.

In the shorter term, there also concerns that the combination of growing oil supplies from the United States, Canada, Brazil and other producers and weaker demand because of a slowing world economy may weigh on oil prices, reducing Aramco’s profitability and potentially threatening its ability to pay the large dividends that it is promising investors.

The aerial attacks on Aramco facilities in September highlighted to potential investors the geopolitical risks of operating in the Persian Gulf. Iran was blamed for the attack, which temporarily forced the company to cut production by more than half.

More broadly, the killing of the dissident journalist Jamal Khashoggi by Saudi agents last year has hurt the reputation of Prince Mohammed, and may repel some investors.

The money raised will probably go not to further investment in Aramco but to the Public Investment Fund, a sovereign wealth fund that has become the crown prince’s main vehicle for reshaping the Saudi economy. The fund has been investing in technology companies like Uber, and it is also backing large real estate programs in the kingdom in an effort to attract tourists and new businesses.

Despite the frustrations of a process interrupted by stops and starts, Aramco has had little trouble recruiting some of the world’s major financial institutions to help sell its stock. Citigroup, JPMorgan, Goldman Sachs, HSBC and Morgan Stanley are all listed as financial advisers in the offer documents.

They are attracted by the potential fees and the possibility that Aramco will eventually expand the listing to an international exchange like New York or London. But there is also expected to be a strong flow of Saudi debt offerings and other transactions — more sources of revenue for Wall Street.