Review: ‘The Mandalorian,’ a Gunslinger in a Galaxy Far, Far Away 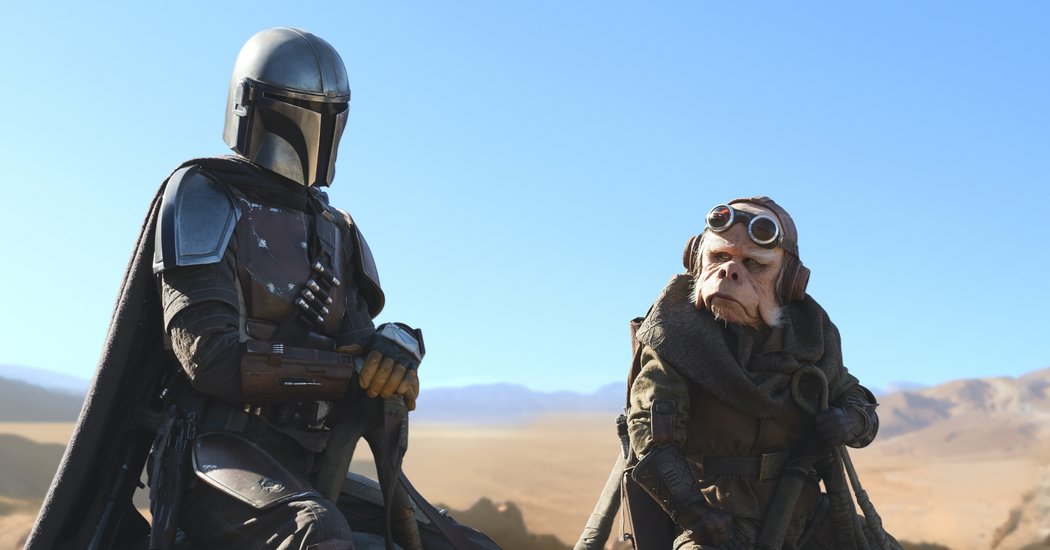 Review: ‘The Mandalorian,’ a Gunslinger in a Galaxy Far, Far Away

Before we get to “The Mandalorian,” let’s talk for a minute about Martin Scorsese.

Exaggerating to make a point — and tweaking the imperial pretensions of the phrase Marvel Cinematic Universe — Scorsese recently maintained that Marvel movies were “not cinema.”

Now I would like to think that Scorsese, like me and most of the sensible people I know, realized that Marvel’s “Black Panther” was one of the better movies nominated for the best-picture Oscar this year, if not the best. (He may have preferred “Roma”; people who throw around the word “cinema” generally did.)

But his point stands, reinforced by the sometimes wounded and humorless response it invoked. It is possible — easy, with small enough budgets — for movies to answer primarily to the personal, artistic choices of filmmakers, and that is how the very best movies get made. It is not possible for blockbuster-aspiring franchise sequels to be made that way — they will always be constrained by the need to answer to nervous rights holders and demanding fan bases.

Which brings us back to “The Mandalorian.” It isn’t a film, but it’s in the continuum of which Scorsese spoke — a series that extends the “Star Wars” franchise overseen by Marvel’s corporate cousin Lucasfilm, and is a star attraction of another wing of the Disney empire, the new streaming service Disney Plus.

And while two shortish episodes — at about 40 and 30 minutes, they’re conspicuously pithy by the current standards of streaming drama — aren’t much to judge by, at this point “The Mandalorian” is, like more than a few franchise films, pretty good.

A prototypical space western with a laconic hero in the Clint Eastwood-John Wayne mold (John Ford’s Wayne-and-a-baby film “3 Godfathers” comes to mind), it’s well paced and reasonably clever, with enough style and visual panache to keep your eyes engaged. The dusty landscapes and hulking machinery stand up to their counterparts in the “Star Wars” films, and the strange animated beasts exceed them. (Andrew L. Jones, an art director for films like “Avatar” and “The Adventures of Tintin,” gets his first production designer credit.)

But is it cinema? Probably not, according to the Scorsese definition. Because as much as it succeeds at being its own thing, it is still recognizably — overwhelmingly — a “Star Wars” thing, a sector in a centrally controlled economy that extends from theaters to video games to (just to buttress the Scorsese case) a new theme park extension being rolled out at Disneyland.

And in a display of true corporate synergy, this “Star Wars” property was entrusted to a veteran of the Marvel Cinematic Universe. The series was created, and its first two episodes written, by Jon Favreau, who inaugurated the M.C.U. by directing “Iron Man” and has produced multiple Avengers films.

For “The Mandalorian,” Favreau and his fellow executive producer Dave Filoni developed a gunslinger hero, so far unnamed (like Eastwood’s archetypal spaghetti-western character), who shares a lineage with the cult-favorite “Star Wars” villain Boba Fett. Like Fett, the Mandalorian is a bounty hunter who never removes his armor; here, where he’s in the hero’s role, his ever-present helmet upends the usual “Star Wars” dichotomy in which the facelessness of the Empire’s troops is a simple signifier of evil.

Throughout these early episodes, you can see Favreau and Filoni looking for ways to make “The Mandalorian” stand apart from its heritage. A notable difference is the low-key score by Ludwig Goransson, which eschews the emotionally pummeling surges of John Williams’s “Star Wars” music. The series is quieter in general, and so far has none of the inspirational speechifying that can deaden the films. Viewers should stick around through the end credits, which feature moody painted scenes evocative of comic books or the covers of pulp novels (rather than the film serials that inspired George Lucas to make the original “Star Wars”).

But as the Mandalorian goes through his paces — a few battles to establish his talent for violence, the acceptance of an iffy bounty contract, the acquisition of a curmudgeonly sidekick, a surprise twist that humanizes him and sets the season’s story in motion — it’s also clear that we’re firmly within the Jediverse. The opening scene, set in a frontier cantina, is pure “Star Wars” fan service. Children scurry about in cloaks playing diminutive alien gangs. The major reveal at the end of the first episode is a big “aww” in the context of “Star Wars” history, but again, it’s in that context.

And there’s nothing necessarily wrong with that. Watching the gruff, lumbering, suddenly protective Mandalorian safeguard his tiny but powerful new charge promises to be a droll and potentially moving process. (It’s hard to say about performances — we can’t see the face of Pedro Pascal, as the helmeted Mandalorian, nor that of Nick Nolte, who provides a nicely acerbic voice for the crusty farmer Kuiil. The casting of Werner Herzog as the Mandalorian’s haughty client looks like a stunt, so far.)

But around the edges there’s a sense, ever so slightly dispiriting, that “The Mandalorian” will carry out the fundamental mission of the “Star Wars” franchise across four decades: to keep faith with the essential corniness and two-dimensionality of George Lucas’s original conception.

Favreau and Filoni slow it down, make it look good, take out some of the sentimentality, give it some sophistication and let you feel smart for enjoying it. That’s not cinema, that’s peak TV.