A Tale of an ‘Irregular Channel,’ Playing on Many Channels 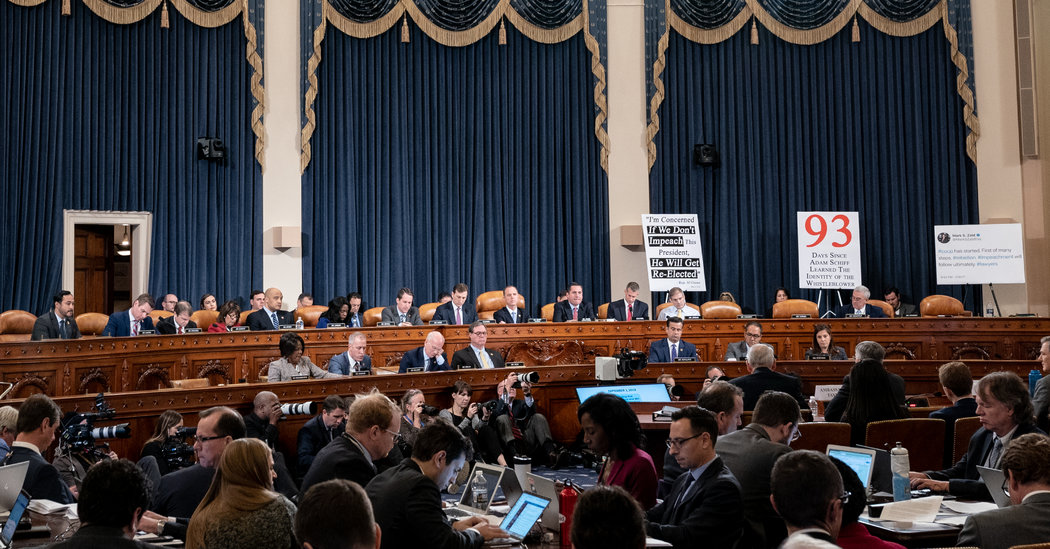 A Tale of an ‘Irregular Channel,’ Playing on Many Channels

In the middle of the testimony of William B. Taylor Jr., the top American diplomat in Ukraine, that opened the House impeachment hearings Wednesday, a guessing game broke out on social media.

He sounded like someone, didn’t he? His deep, assuring, steady voice reminded some people of Tom Brokaw. No, maybe it was Walter Cronkite? Edward R. Murrow?

It’s telling that all those comparisons were to old-school news anchors. Because I think what people were hearing in Mr. Taylor’s gravelly composure was the voice, not so much of another person, but another time — a time of authoritative voices that a wide audience found credible.

It was like a science-fiction story in which someone turns on an old radio and hears a staticky broadcast from the past. Even the text of Mr. Taylor’s introduction had a Cronkitian ring: “I am not here to take one side or the other,” he said. “My sole purpose is to provide facts as I know them.” And that’s the way it is.

But this was in fact 2019, where there’s no unified audience willing to accept a single way that anything is.

The Democrats running the House Intelligence Committee investigation, led by Representative Adam B. Schiff, used the testimony of Mr. Taylor and his colleague George P. Kent, a senior State Department official, like the opening scene of an international-intrigue drama: two diplomats becoming aware of disturbing news in a foreign land.

Mr. Taylor’s testimony was a tale of two channels. There was the regular channel of diplomacy, he said, aimed at supporting Ukraine’s newly elected government. And there was an “irregular channel” — one of several terms the day’s proceedings added to the lexicon of scandal — working, in his testimony, to strong-arm that government into helping President Trump get re-elected.

But there were competing channels in the committee room as well. The Democrats, in charge of the proceedings and witness list, were starting to craft a story arc of presidential threats and self-dealing. The Republicans seemed less interested in offering a unified counternarrative than in pre-empting it with a series of program interruptions.

In his opening statement, ranking Republican Devin Nunes decried the investigation as a “theatrical” performance. But it was his party’s performance that was belted most stridently — and maybe pitched toward one particular viewer on Pennsylvania Avenue.

Mr. Nunes reached presidential-tweet levels of rancor in denouncing the investigation as a “carefully orchestrated media smear campaign.” Representative Jim Jordan, riffing like an angry auctioneer, closed the hearings dismissing them as a “darn sham.”

This is not the first impeachment proceeding to play out in the era of 24-hour electronic news. But there’s a difference between today and the Bill Clinton impeachment of the late 1990s. Back then, CNN, Fox News and MSNBC all covered the damaging and salacious details with similar fervor.

Wednesday, both broadcast and cable news carried the hearings live — but depending where you watched, the onscreen graphics could tell a very different story. During Mr. Taylor’s testimony, an MSNBC caption identified him as “Top U.S. diplomat in Ukraine since June.” A label on Fox read, “President Trump dismissed Taylor as a ‘Never Trumper.’”

The awareness of Fox’s influence on the conservative base never seemed far from mind. Indeed, some of the Republicans’ lines of questioning seemed unintelligible — like a story line from a larger cinematic universe — unless you were familiar with the counter-theories about Ukraine and the 2016 election favored by that channel’s opinion hosts and elsewhere in the conservative mediasphere.

As for Fox’s viewer-in-chief, the president insisted that “I haven’t watched for one minute” (though he did retweet several supportive tweets during the hearings, some including video). But his presence was felt, and not just among Republicans: Representative Eric Swalwell asked Mr. Kent and Mr. Taylor if they were “Never Trumpers,” an accusation the president had tweeted again that morning. (Both men denied it.)

Wednesday’s testimony was the first installment in a series of unknown length, and it showed the hearings’ potential to tell an involving story and to enable grandstanding. The afternoon segment, in which committee members took turns questioning, was heavy on the posturing.

But Mr. Taylor’s lengthy statement was absorbing, not just because of that 20th-century-anchor voice. “Mr. Chairman, there are two Ukraine stories today,” he said. One was the notorious story of arm-twisting and election interference. The other was a “positive, bipartisan one,” about a country developing an inclusive identity, “not unlike what we in America, in our best moments, feel about our diverse country.”

There are going to be at least two competing stories as this narrative unfolds. And in this programming era, the positive, uplifting ones don’t always adapt well to American TV.