‘We Trusted You:’ WeWork’s Chair on Adam Neumann and the Future 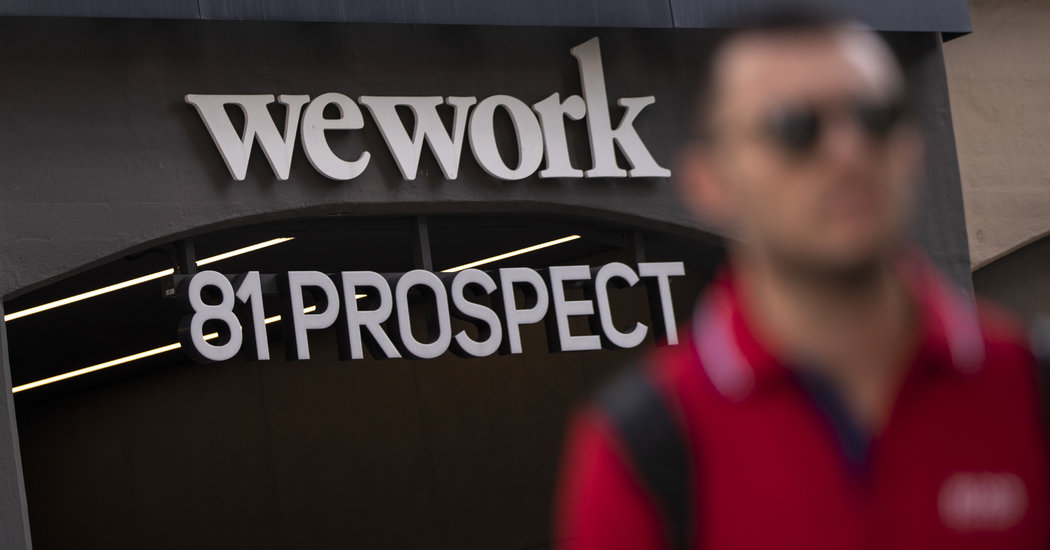 ‘We Trusted You:’ WeWork’s Chair on Adam Neumann and the Future

Marcelo Claure flopped into a chair late this week at WeWork’s headquarters in New York, looking exhausted and exhilarated, his 6-foot-6 frame splayed across the glass meeting room.

Mr. Claure, the newly installed executive chairman of the embattled company and a top lieutenant of SoftBank’s Masayoshi Son (who plowed over $10 billion into WeWork), has been preparing to testify in a case brought by a group of state attorneys general challenging T-Mobile’s acquisition of Sprint, where Mr. Claure is also the executive chairman.

Ever since WeWork’s planned initial public offering collapsed in September, he said he has been working around the clock with the company’s two co-chief executives on a turnaround plan. “It was a company on the verge of weeks, months if not weeks, of running out of cash,” Mr. Claure said in his first interview since SoftBank took effective control of WeWork.

It hasn’t been an easy transition. In addition to stabilizing the company’s financial situation, WeWork has fielded a steady stream of headlines about the antics of its founder, Adam Neumann, and the prospect that he is likely to receive roughly $1 billion from SoftBank even as more than 4,000 employees are laid off or transferred to other employers.

To Mr. Claure, Mr. Neumann — and the details of the transaction — are misunderstood, as are the company’s prospects, which he argued are strong.

He recounted his conversation when he effectively ousted Mr. Neumann. “I said, ‘Adam, we trusted you. We gave you everything. And it’s fair to say things didn’t work out the way we originally planned,’” Mr. Claure said. “‘Now it’s your turn to turn around and basically pay back that trust and provide us with a proxy of all of your shares.’”

Mr. Neumann ultimately complied, stepping down from the company he created in 2010. He remains a board observer and a paid consultant to WeWork. Mr. Claure said he meets with Mr. Neumann often and finds his input useful, but stressed that the meetings take place “outside the office.”

“I value his opinion a lot in terms of where he wanted to take the business. He has 10 years of experience and it’d be foolish not to take full advantage of — not the mistakes he has made — of the great things he created,” Mr. Claure said.

The payout to Mr. Neumann has stirred up anger within WeWork, where many employees still believe in the company’s lofty goals of creating communities, not just office spaces — WeWork has said its mission is to “elevate the world’s consciousness.”

Mr. Claure said employees had often asked him, “Why Adam would walk out with so much money?” His response is that SoftBank had little choice in the matter because it cannot prevent Mr. Neumann from selling some of his shares as part of the $3 billion tender offer SoftBank is making to all shareholders. “In order for us to have the economic interest that we want, we have to buy shares,” Mr. Claure said. “He’s a shareholder.”

It remains unclear how many shares Mr. Neumann might sell. If he chose to sell as many of his shares as he could, he would receive $1 billion and still own a considerable stake in the company.

The SoftBank bailout has given WeWork some breathing room but there are big problems to fix. The company has been opening so many new locations that it is spending far more money than it is bringing in. It lost $1.25 billion in the third quarter this year.

Because of the openings already in the pipeline, WeWork is going to continue reporting eye-popping growth for a while. Mr. Claure has said it could open another 600 spaces by the end of next year, which would almost double its location total.

Profits and cash flows may remain negative for some time. Last month, Mr. Claure told employees that the company hoped to be profitable before interest payments, taxes, depreciation and amortization by 2021. SoftBank’s backing provides the company with the capital it needs to transform, he said.

“We pretty much have all the financial means that are necessary for this company to execute its plan,” Mr. Claure said in the interview.

And Mr. Claure said the company can continue to grow fast. In his view, the market for shared space will keep getting bigger and WeWork is well positioned to dominate that business.

But to avoid running into the same financial problems, the growth can’t just come from opening new office spaces. Under his plan, WeWork will begin selling new products and services to its members, including insurance and tax consulting. But customers may balk at buying those kinds of services through WeWork when they could easily get them directly from established insurers or accounting firms.

WeWork is also going to move away from a central pillar of its business model. At the vast majority of its United States locations, the company leases space for approximately 15 years and then sublets it to members for less than two years on average. This approach maximizes revenue but requires large capital investments to refurbish spaces. And it is potentially risky. In a downturn, demand for space could fall substantially but WeWork would still have to pay its landlords, creating a dangerous mismatch between costs and revenue.

Many other co-working space companies form partnerships with landlords to avoid that risk. Such arrangements generate less revenue but are less likely to end in financial collapse during a downturn. When asked what share of its locations might eventually use a partnership model, Mr. Claure put it at between 10 and 50 percent.

It’s almost inevitable that some of the new WeWork locations will struggle to attract enough members. In some cases, Mr. Claure said, the company would seek to renegotiate leases with building owners, perhaps taking advantage of legal structures that can effectively separate the liabilities of individual WeWork locations from those of the parent company.

“We’ve been very straight with landlords and said, ‘Look, this is its own independent business,’ and if things don’t work out, sure we’ll have conversations with landlords,” he said. “There will be some of that that’s starting soon.”