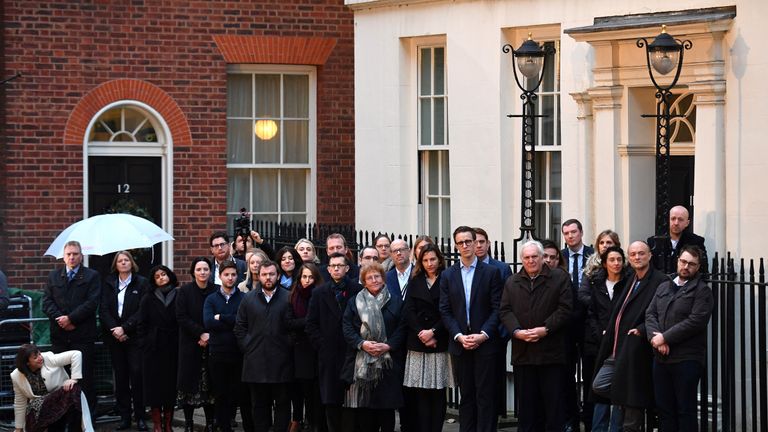 Boris Johnson says he has an "overwhelming mandate" from the election to "get Brexit done" but wants the country to begin "healing" after a divisive campaign.

In his first speech since retaining the keys to Number 10, the prime minister declared on the steps of Downing Street that he would honour a promise to take the UK out of the EU by 31 January.

He said that more than three years since the referendum result, "this country deserves a break from wrangling, a break from politics and a permanent break from talking about Brexit".

As the final election result confirmed the Conservatives had won a large majority of 80 in the House of Commons, Mr Johnson used a victory message to urge the country to come together.

Watched on by government advisers including Dominic Cummings, he said: "I want everyone to go about their Christmas preparations happy and secure in the knowledge that here in this people's government the work is now being stepped up to make 2020 a year of prosperity, hope and growth, and to deliver a parliament that works for the people.

"I urge everyone to find closure and let the healing begin."

And after the Scottish National Party won near domination north of the border by taking 48 of the country's 59 seats, Mr Johnson nodded to trying to maintain the union with a vow to "bring together the whole of this incredible United Kingdom".

Scottish First Minister Nicola Sturgeon announced earlier on Friday she would seek powers from the UK government to hold a fresh independence referendum before Christmas.

After a good night for her party and the Conservatives, Jeremy Corbyn said that having led Labour to lose 59 seats he would step down at the end of a leadership election in the "early part of next year".

US President Donald Trump has congratulated Mr Johnson on a "great win", saying the election leaves the US and UK "free to strike a massive new trade deal after Brexit".