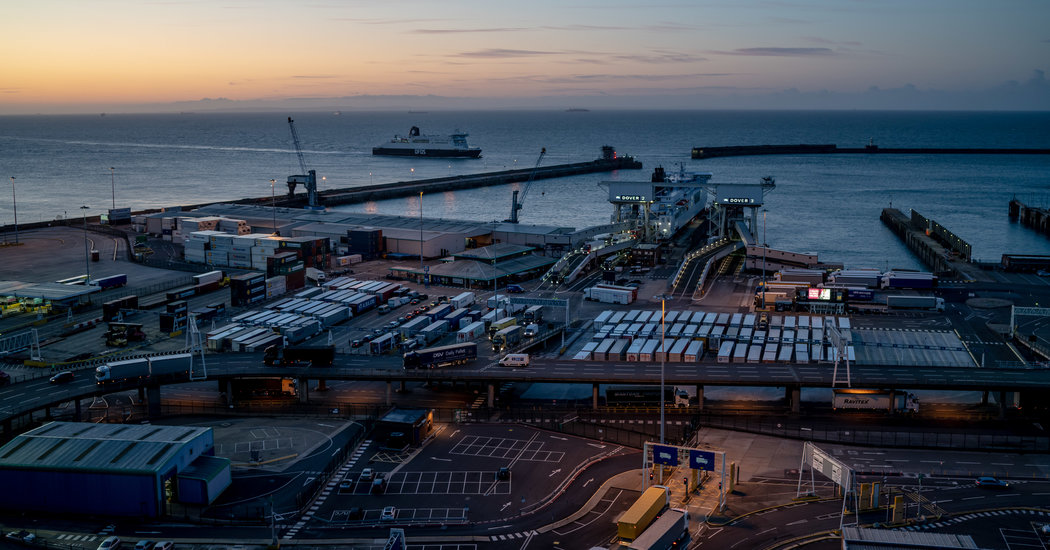 LONDON — For more than seven decades, the global powers that be operated on the assumption that greater economic integration amounts to historical progress. But that era is over, as Britain’s voters have now made clear.

The decisive majority secured by Prime Minister Boris Johnson and his Conservative Party all but ensures that the country will proceed with its abandonment of the European Union.

Another complex phase of the tangled divorce proceedings lies ahead — negotiations over the terms of Britain’s future economic relationship with the Continent. But in one form or another, “getting Brexit done,” the mantra that Mr. Johnson promised and can now deliver, marks a profound change in the world trading system.

In the aftermath of World War II, the victorious Allies forged an international order built on the understanding that when countries swap goods they become less inclined to trade artillery volleys.

Britain’s departure from Europe is the clearest manifestation that this principle no longer holds decisive sway. Yet it is far from the only sign that the world trading system is devolving into a state in which national interests have primacy over collective concerns.

The United States and China are locked in a trade war that is heightening concerns about a global economic slowdown.

Tensions appeared to ease on Thursday, as the United States was reported to have settled on the outlines of a deal that could significantly reduce tariffs on $360 billion in Chinese goods in exchange for China’s promise to buy goods from American farmers. The deal was expected to halt American tariffs scheduled to hit another $160 billion worth of Chinese imports this weekend.

But even if such a deal takes hold, the United States and China have descended into such an adversarial state that they are likely to continue seeking alternatives to exchanging goods and investment. Companies that make goods in China will face pressure to explore other countries, posing disruption to the global supply chain.

The traditional arbiter of international trade disputes, the World Trade Organization, is listing toward irrelevance as countries bypass its channels to impose tariffs.

“The sense that policy moves in one direction, toward more liberalization and more integration, has been replaced by recognition that policy can go backward as well as forwards,” said Brad Setser, a senior fellow at the Council on Foreign Relations in New York.

The fraying of international trading arrangements has been driven by intensifying public anger in many countries over widening economic inequality, and the perception that trade has been bountiful for the executive class while leaving ordinary people behind.

In Britain, struggling communities used the June 2016 referendum that unleashed Brexit as a protest vote against the bankers in London who had engineered a catastrophic financial crisis, and then forced regular people to absorb the costs through wrenching fiscal austerity.

In the United States, President Trump’s political base has rallied to his trade war, inclined to view it as a necessary corrective to the destruction of the industrial economy by Chinese factories.

From Italy to France to Germany, furious popular movements have fixed on trade as a threat to workers’ livelihoods, while embracing nationalist and nativist responses that promise to halt globalization.

“The era of freewheeling markets and liberalism is ending,” said Meredith Crowley, an international trade expert at the University of Cambridge in England. “People are dissatisfied with the complexity of policy, and this feeling that those who have the levers of policy are somehow out of their reach.”

Economists see perils in this unfolding era, like impediments to trade as governments champion national industries at the expense of competition. They point to history for portents — especially the Great Depression, which was deepened by a wave of tit-for-tat trade protectionism kicked off by the United States through the Smoot-Hawley Tariff Act of 1930.

The British election, and the splintering of the European trading bloc, amounts to the most consequential upsurge of economic nationalism in generations.

“Since Smoot-Hawley, I don’t think we have seen something as dramatic as this,” said Swati Dhingra, an economist at the London School of Economics.

As the rupture in Europe plays out, the world’s two largest economies — the United States and China — remain ensnared in conflict.

The Trump administration began imposing tariffs in response to what it portrays as a decades-long Chinese effort to destroy American jobs by subsidizing key industries. But among hard-liners, the trade war is increasingly a means of weaponizing the enormous American marketplace — threatening China’s access to American consumers — to contain a supposed strategic and security threat.

China’s leaders have come to construe trade hostilities as part of an American bullying campaign engineered to suppress their national aspirations and deny the country its rightful place as a superpower.

Nationalist sentiments and security concerns combined with trade policy do not make for a conducive climate for a meaningful deal that can comprehensively end trade hostilities.

“If anything, the positions are hardening,” Ms. Crowley said.

On another front, Mr. Trump has threated to impose tariffs on imported automobiles, a step that would be especially disruptive in Germany, Europe’s largest economy. Germany sells far more goods to the United States than it imports, drawing the ire of the American president.

Mr. Trump has openly threatened to cite a national security threat as justification for auto tariffs. Trade experts have derided that approach as an affront to the norms of the international trading system.

Last month, Mr. Trump allowed a self-imposed deadline to lapse without imposing auto tariffs. But he has left a major international industry guessing about what happens next.

The World Trade Organization’s appellate body, which adjudicates disputes, has been rendered inoperative by the Trump administration’s blocking of new judges. The panel needs at least three judges to render verdicts, but now has only one.

One major variable has gained clarity: Congressional Democrats and the Trump administration this week hailed an agreement that clears passage of the renegotiation of the North American Free Trade Agreement, the sprawling deal that has allowed some $1.2 trillion worth of goods a year to be exchanged freely across the United States, Canada and Mexico.

But the results of Britain’s election raise the likelihood that commerce in one large swath of the globe is likely to be impeded.

Britain sends nearly half of its exports to the European Union, a flow of goods potentially imperiled by Brexit. Its departure from the European single market — which allows trade to be conducted seamlessly from Greece to Ireland, as if the territory were one vast country — risks undermining Britain’s appeal as a headquarters for multinational companies.

Since Britain shocked the world with its vote to abandon the European Union, its political institutions have tangled themselves in knots trying to decide what to do with their nebulous mandate to leave. Businesses have deferred hiring and investments, awaiting clarity on future trading terms.

The uncertainty has already exacted significant costs, and far beyond Europe, according to a new paper by Tarek Hassan, an economist at Boston University, and three European accounting experts, Stephan Hollander, Laurence van Lent and Ahmed Tahoun.

Every year since the referendum, the average company in Ireland — which trades heavily with Britain — has seen its growth in investment reduced by 15 percent, and hiring is 4.2 percent less than it otherwise would have been because of uncertainty, the paper concludes. Yet even across the Atlantic, the average American company has seen investment growth limited by 0.5 percent a year and hiring slowed by 1.7 percent.

“There is already a significant drop in employment as a result of the risks of Brexit,” Mr. Hassan said.

Though Thursday’s election provided clarity on Brexit, substantial variables remain. Assuming Mr. Johnson’s Brexit plan now sails through Parliament, Britain must negotiate trade terms with Europe before the end of a transition period running through the end of next year — a monumental task.

Mr. Johnson has ruled out extending that deadline, renewing the prospect that Britain could again flirt with crashing out of the European bloc without a deal. That threat could force businesses to again stockpile goods and implement complicated contingency plans.

Some analysts suggested that the election enhanced the possibility that Mr. Johnson would pursue a softer form of Brexit that keeps Britain closer to the European market. His majority is so comfortable that he need not worry about alienating the hard-liners in his party who favor a clean break with Europe.

But some alteration is clearly ahead. If Brexit uncertainty has been damaging, what replaces it is the near-certainty of weaker economic growth and diminished living standards. Britain’s political mandate to “take back control” carries costs.