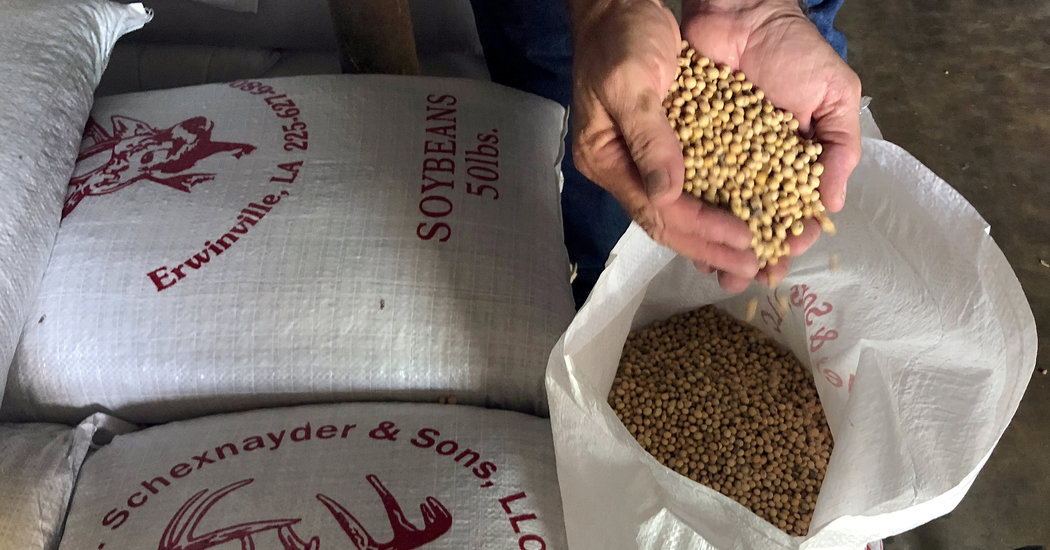 BEIJING — The United States and China have agreed to an initial trade deal that will result in a reduction of tariffs and purchases of American farm goods, marking a significant de-escalation in the 19-month battle that has rattled the world economy.

“We have agreed to a very large Phase One Deal with China,” President Trump said in a tweet. “They have agreed to many structural changes and massive purchases of Agricultural Product, Energy, and Manufactured Goods, plus much more.”

Mr. Trump said the United States would reduce its overall tariff rate on Chinese goods to 7.5 percent, down from the current rate of 25 percent and that a round of tariffs scheduled for Sunday would be cancelled.

.....The Penalty Tariffs set for December 15th will not be charged because of the fact that we made the deal. We will begin negotiations on the Phase Two Deal immediately, rather than waiting until after the 2020 Election. This is an amazing deal for all. Thank you!

Wang Shouwen, China’s vice commerce minister, said at a news conference in Beijing that the two sides had made “significant progress” and that the agreement would result in the United States removing some of the tariffs it has placed on $360 billion worth of Chinese goods. Those tariffs would come off “phase by phase" and the United States would agree to exempt more Chinese products from being taxed, he said.

“This will create better conditions for China and the United States to strengthen cooperation,” Mr. Wang said.

The agreement includes a commitment by Beijing to buy more American agriculture products and to strengthen laws protecting foreign companies operating in China, as well as beefing up intellectual property rules and providing more transparency around currency movements. Mr. Wang said both sides have agreed to complete legal reviews as quickly as possible and that an official signing was still being worked out.

Some advisers to the White House said China had agreed to buy $50 billion worth of American farm products next year but China has so far not confirmed that figure and the United States trade representative did not provide an official figure in its statement.

“The Phase One agreement also includes a commitment by China that it will make substantial additional purchases of U.S. goods and services in the coming years,” U.S.T.R. said on Friday.

Chinese officials on Friday said that imports of American agriculture products would increase by a “considerable margin” to meet China’s needs for goods like soybean and pork.

The deal came as a relief of investors, who have been haunted by the steady drumbeat of tariffs that have depressed business sentiment and stirred economic uncertainty. The S&P 500 was up slightly in early-morning trading.

An agreement will also give Mr. Trump another trade win that he can tout heading into his re-election campaign and as Congress forges ahead with his impeachment. The agreement came on the same week that the administration agreed with House Democrats to revise the terms of a trade pact with Canada and Mexico.

This is a developing story. It will be updated.