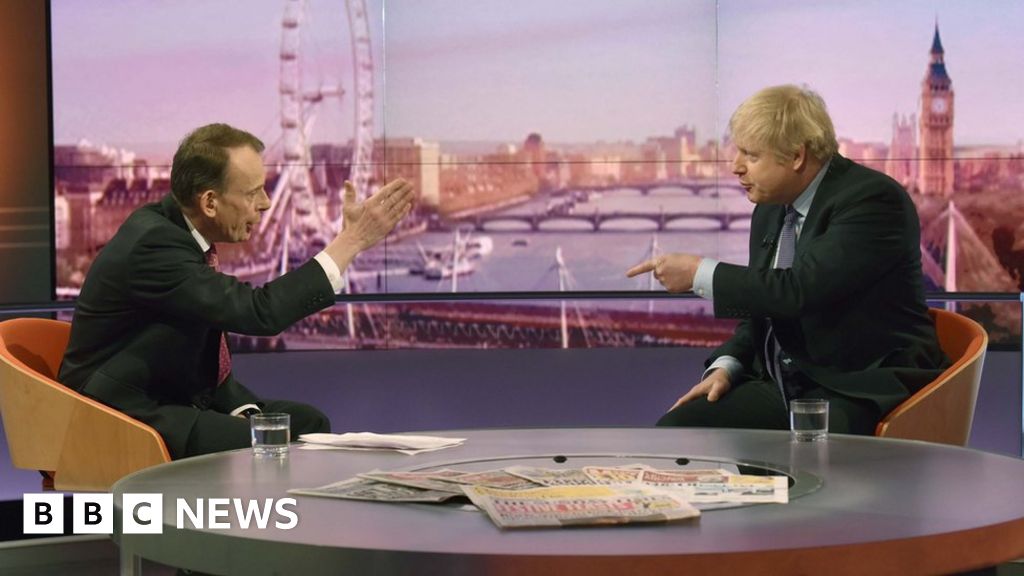 The corporation's latest complaints bulletin, published on Friday, showed that 12,172 people felt the interview was biased against Mr Johnson.

The encounter took place on Marr's BBC One show on 1 December.

The BBC said it was part of the "cut and thrust" of politics and "would be the case whoever Andrew was facing".

The interview saw Marr and Mr Johnson frequently talking over each other, with the presenter saying: "You just keep going on and on and on - you're chuntering."

The prime minister replied: "You're interrupting if I may say so. I think people might be quite interested in my answers as well as your questions."

Mr Johnson was challenged on issues including the NHS, child poverty, social care and Brexit, less than two weeks before the general election.

The BBC said in a statement: "These are clearly all important to our audience, and Andrew sought to challenge Mr Johnson with facts and alternative arguments.

"It is not uncommon for politicians, from all parties, to attempt to steer the interview onto their own agenda and when this happens, the presenter may intervene to get the interview back on track, as Andrew did at times here.

"This is a part of the cut and thrust of political interviewing which viewers understand and which would be the case whoever Andrew was facing."

The BBC publishes a complaints round-up every fortnight. The 12,172 complaints is almost double the total received about any other programme since the corporation began publishing a breakdown in the current format two years ago.

The latest edition also showed that a total of 3,051 people have complained that an edited clip of Mr Johnson from the Question Time Leaders Special, which was aired on the lunchtime news on 23 November, showed bias in favour of the Conservatives.

The BBC admitted that editing out audience laughter "was a mistake on our part, as it didn't reflect the full reaction to Boris Johnson's answer".

A further 910 said Neil's interview with Brexit Party leader Nigel Farage on 5 December was biased against Boris Johnson, while 360 protested that the prime ministerial debate the following day was biased in Mr Johnson's favour.

'Not a study of British farming'

Beyond politics, a total of 6,934 complained that BBC One's Meat: A Threat To Our Planet?, screened on 25 November, was biased against the British farming industry.

The BBC said in a statement: "The programme's focus, as its title suggests, was global meat production and demand. It explored the industry's huge impact on the global environment, from climate change to water pollution and biodiversity collapse.

"It was clear that the programme was not a study of British farming. It focused largely on farming practices in the USA and Brazil as these countries are two of the world's leading meat producers."

It added that the programme makes clear "farming methods shown are not the same the world over and that some farmers, including in the UK, farm livestock in a more sustainable way".