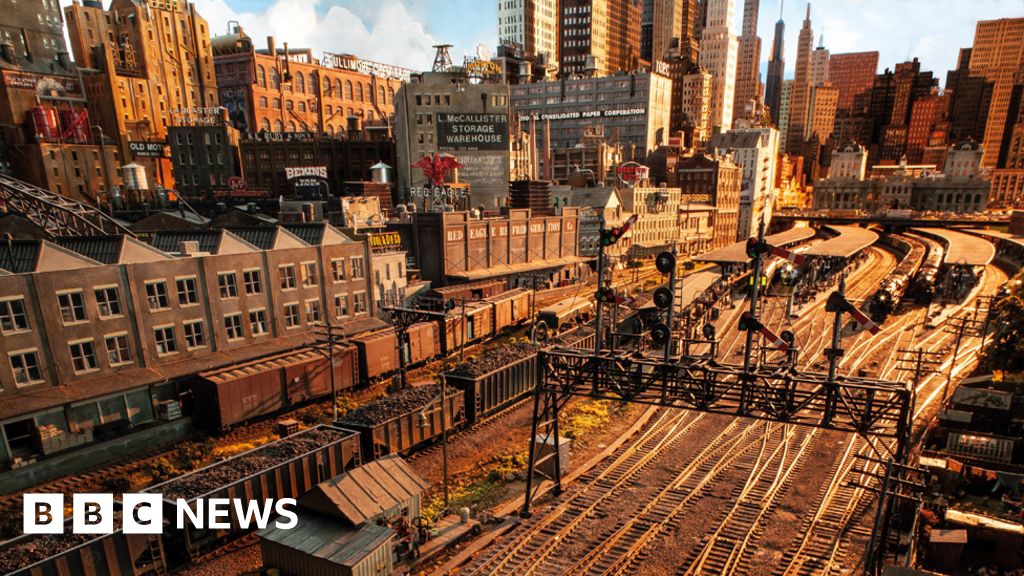 He's one of rock's biggest stars, but Sir Rod Stewart has finally revealed the fruits of his other great passion - model railways.

In between making music and playing live, Sir Rod has been working on a massive, intricate model of a US city for the past 23 years.

He unveiled it as part of an interview with Railway Modeller magazine.

He then phoned in to Jeremy Vine's BBC Radio 2 show to rebuff the host's suggestion he had not built it himself.

"I would say 90% of it I built myself," he insisted. "The only thing I wasn't very good at and still am not is the electricals, so I had someone else do that."

Sir Rod has released 13 studio albums and been on 19 tours during the time it took to build the city, which is modelled on both New York and Chicago around 1945.

"A lot of people laugh at it being a silly hobby, but it's a wonderful hobby," he said.

He told Railway Modeller he worked on the skyscrapers and other scenery while on tour, requesting an extra room for his constructions in his hotels.

"We would tell them in advance and they were really accommodating, taking out the beds and providing fans to improve air circulation and ventilation," he said.

The scenery and structures are his forte, rather than the locomotives and tracks. "I find beauty in what everyone else sees as ugly - rugged skyscrapers, beaten-up warehouses, things that are very run down."

Photos of the layout show dozens of highly detailed buildings plus bridges, ships, vegetation and streets teeming with vintage cars and taxis.

"When I take on something creative like this, I have to give it 110%," he said. "For me it's addictive. I started, so I just had to finish. I'm lucky I had the room. If I'd have realised at the start it would have taken so long, I'd have probably said, 'No! No! Nah!'"

The 74-year-old singer, who once had a hit with a cover of Tom Waits' song Downtown Train, put the model city together in an attic at his home in Los Angeles.

Describing the level of detail that went into the scenery, he told Vine that even the pavements had to be suitable grimy.

Fellow musician and model railway enthusiast Jools Holland also appeared on Vine's show, telling him: "When you get these big scale ones like Sir Rod's they are like a work of art. They're like an amazing painting that's been created in three dimensions."

Two months ago, Sir Rod revealed he had been given the all-clear after being treated for prostate cancer.

On Wednesday, he announced he would perform at a "secret dinner party" organised by his wife Penny Lancaster in aid of the Teenage Cancer Trust, with the aim of raising £1m.