Jeremy Corbyn: 'I will not lead Labour at next election' 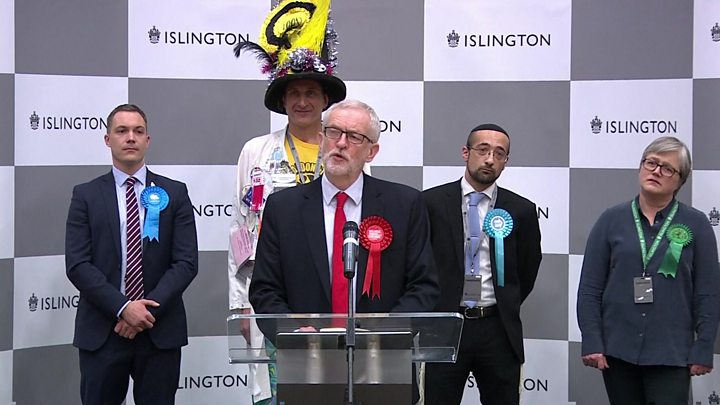 Jeremy Corbyn: 'I will not lead Labour at next election'

Jeremy Corbyn has said he will not lead Labour into the next election, following a "very disappointing night" for his party.

He said he would stay on as leader during a "process of reflection" on the result, which a BBC forecast says will be its worst for decades.

He added that the issue of Brexit had "polarised" politics and "overridden so much of normal political debate".

But others within Labour blamed his leadership.

Labour have lost a string of former strongholds in the north of England and Wales in areas that voted Leave in the 2016 EU referendum.

A BBC forecast has put Labour on 199 seats - a predicted loss of 63 from the last general election in 2017.

The final result is expected to be known by Friday lunchtime.

Labour went into the campaign promising to renegotiate Prime Minister Boris Johnson's Brexit deal, and then put it to a referendum vote alongside the option of remaining in the EU.

That position was criticised by party chairman Ian Lavery, who said it had led voters in traditional Labour seats to believe it was "a Remain party".

"They believe they should have been listened to - and they think that the Labour party have totally reneged on the result," he added.

But he added the strategy was not "Jeremy Corbyn's decision," as it had been approved by delegates at the party's September conference.

Shadow chancellor John McDonnell, a key ally of Mr Corbyn, said he did not think the Labour leader was "the big issue" of the campaign, but rather the issue of Brexit had "dominated".

If you cannot see the graphic above, click here.

Gareth Snell, current Labour MP for Leave-backing Stoke-on-Trent Central, was among those to have lost their seats.

Speaking before his result was confirmed, he called for both Mr Corbyn and Mr McDonnell to quit.

He accused senior figures in the shadow cabinet who are defending Remain-voting seats in London of "sacrificing" candidates in marginal constituencies in the Midlands and the north of England.

"Jeremy Corbyn's leadership was a bigger problem. To say otherwise is delusional," he added on Twitter.

Likewise Ian Murray, Labour's candidate in Edinburgh South, tweeted: "Every door I knocked on, and my team and I spoke to 11,000 people, mentioned Corbyn."