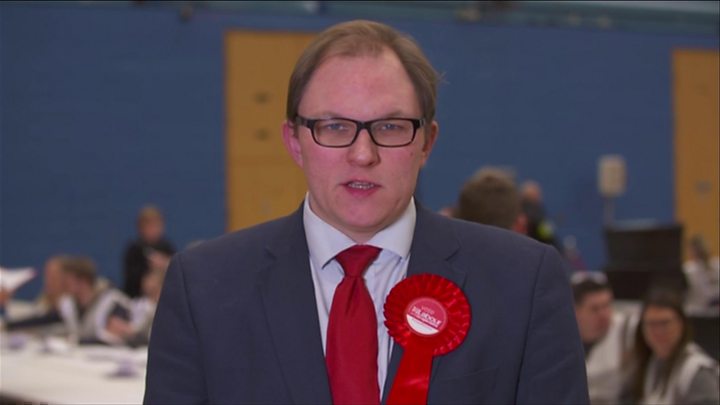 The Tories have taken former Labour strongholds in Wales and the north of England, as an exit poll suggests they are on course to win the election.

Blyth Valley, Workington and Vale of Clwyd - all areas that voted Leave in the EU referendum - now have Tory MPs.

The results point to the BBC/ITV/Sky exit poll suggesting a Tory majority of 86 as being broadly accurate, although most seats have yet to declare.

Labour is on course to lose 71 seats, the exit poll suggests.

The Scottish National Party have made their first gains of the night, taking Rutherglen and Hamilton West from Labour and Angus from the Conservatives.

But Labour took Putney, in south-west London, from the Tories.

Labour's vote is predicted to be about 8% down on the 2017 general election, with the Conservatives up slightly and the smaller parties having a better night.

It would be the biggest Conservative victory since 1987 and Labour's worst result since 1935, the poll suggests.

The pound surged against the dollar after the exit poll figures were announced as polls closed at 22:00 GMT, with sterling gaining 3% to $1.35 - its highest level since May last year.

Home Secretary Priti Patel said the government will move quickly to "get Brexit done" before Christmas by introducing legislation in Parliament, if it is returned to power.

A row has already broken out at the top of the Labour Party over who is to blame for what is expected to be the party's worst election result in decades.

Shadow chancellor John McDonnell told the BBC the exit poll was "extremely disappointing" for Labour if it was correct.

"I thought it would be closer," he said, and he blamed what he called a "Brexit election," when Labour had been hoping "other issues could cut through".

He told the BBC's Andrew Neil decisions would be made about party leader Jeremy Corbyn's future when the actual results were in.

Phil Wilson, who is standing in Sedgefield - a Tory target - tweeted: "To blame Brexit for the result is mendacious nonsense. Jeremy Corbyn's leadership was a bigger problem. To say otherwise is delusional.

Gareth Snell, who said he expected to lose Leave-voting Stoke Central to the Conservatives, called for Mr Corbyn and Mr McDonnell to go but also blamed anti-Brexit members of Labour's top team for pushing the party towards a Remain message.

If the exit poll is correct, and Boris Johnson has secured a majority, then he will have the backing of MPs on the green benches behind him to take us out of the European Union next month.

A huge junction in our history - a moment that will redraw our place in the world.

But not just that - if correct, these numbers could mean five more years of a Conservative government - tipping across a decade.

After the fourth defeat for Labour in a row - after several years when they have moved further to the left - this is a serious and historic loss.

The SNP have increased their dominance in Scotland, clearing out Conservatives there in a way that leaves most of the country yellow, rather than blue.

And it is a failure for the Lib Dems to break through after a campaign that started with high hopes.

Downing Street said in a statement that if the exit poll is correct, there will be a minor cabinet reshuffle on Monday.

Plaid Cymru are predicted to get three MPs, one less than they had before the election was called.

SNP leader Nicola Sturgeon tweeted that while the exit poll "suggests a good night" for the SNP, she added that "what it indicates UK-wide though is grim".

Caroline Lucas, who the exit poll suggests is set to remain the Green Party's only MP, tweeted: "If this exit poll is right, it's a devastating blow for our climate, for future generations and for our democracy."

Mr Farage said his party had taken votes from Labour in Tory target seats, although he himself had spoiled his ballot paper "as I could not bring myself to vote Conservative".