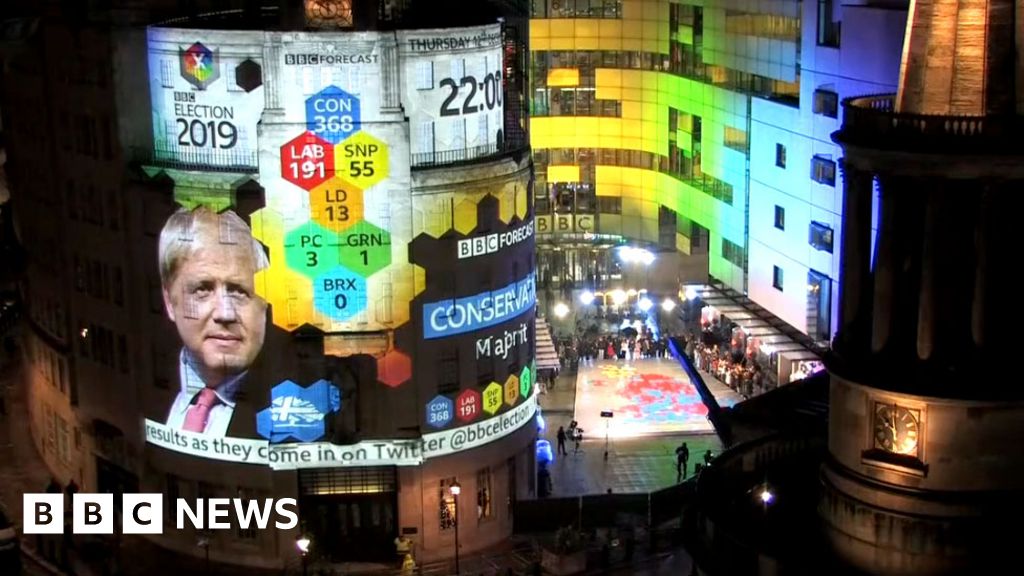 The Conservatives are set to win an overall majority of 86 in the general election, according to an exit poll for the BBC, ITV and Sky News.

The survey taken at UK polling stations suggests the Tories will get 368 MPs - 50 more than at the 2017 election - when all the results have been counted.

The Green Party will still have one MP and Plaid Cymru will lose one seat for a total of three, the survey suggests.

The first general election results are due before midnight, with the final total expected to be known by Friday lunchtime.

In the exit poll, voters are asked to fill in a mock ballot paper as they leave the polling station indicating how they have just voted.

The exit poll was conducted by Ipsos Mori at 144 polling stations, with 22,790 interviews.

Exit polls have proved to be very accurate in recent years. In 2017 it correctly predicted a hung Parliament, with no overall winner, and in 2015 it predicted the Conservatives would be the largest party.

The BBC's political editor Laura Kuenssberg said that if the exit poll figures are broadly correct then Conservative Party leader and Prime Minister Boris Johnson will get the backing he needs in Parliament to take the UK out of the EU next month.

It would be the biggest Conservative victory since 1987 and Labour's worst result since 1935, the poll suggests, with the party forecast to lose 71 seats.

But it will not become clear whether the exit poll is accurate until the results start rolling in during the early hours of Friday.

Mr Johnson focused relentlessly on a single message: "Get Brexit done", promising to take the UK out of the EU by 31 January 2020 if he got a majority.

His main rival for No 10, Labour leader Jeremy Corbyn, promised voters another referendum with a choice between a renegotiated Leave deal and remaining in the bloc.

But Labour primarily campaigned on a promise to end austerity by increasing spending on public services and the National Health Service.

The Lib Dems did a deal with the Green Party and Plaid Cymru to stand aside in certain seats to maximise the pro-EU Remain vote.

The Conservatives began the campaign with a double-digit lead over Labour in the opinion polls, although this narrowed as polling day approached.

The Conservatives targeted their pro-Brexit message at those Labour constituencies in the Midlands and north of England which had voted to leave the EU in 2016.

Mr Johnson came under fire for avoiding scrutiny after declining to take part in a Channel 4 leaders' debate on climate change - and for ducking a half-hour prime time interview with the BBC's Andrew Neil, which the other party leaders had submitted to.