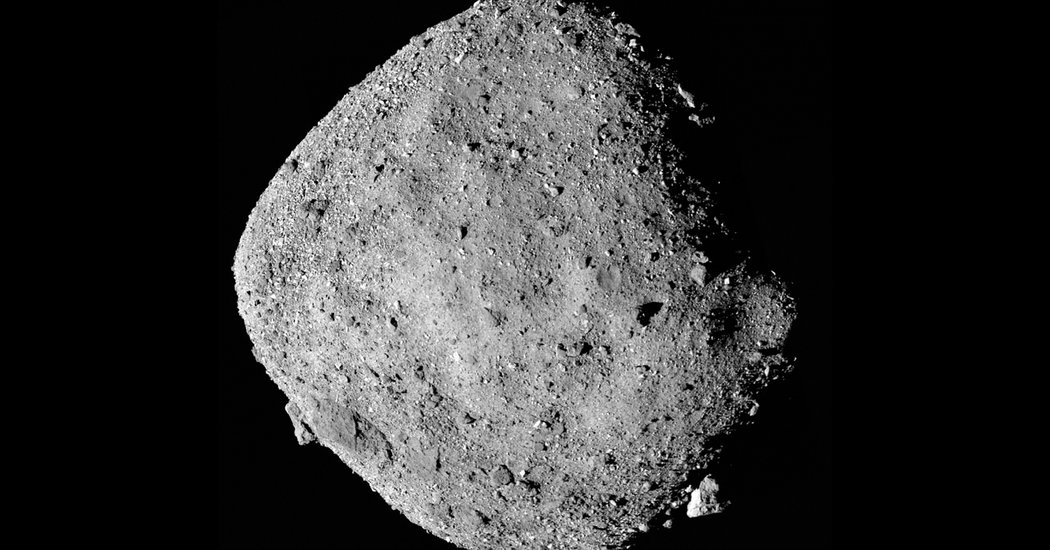 SAN FRANCISCO — A landing pad fit for a visitor from NASA has been found on an ancient relic of our solar system.

NASA’s Osiris-Rex spacecraft left Earth in 2016, its sights set on an asteroid named Bennu that is as wide as the Empire State Building is tall. The robotic probe’s mission is to collect a sample from the surface of this space rock and bring it home to our planet, helping scientists understand more about the nascent days of our solar system, and possibly find clues to how life sprung up here on Earth.

But first the spacecraft’s controllers down here had to find a place for Osiris-Rex to land. On Wednesday, after a difficult year of mapping its surface, they announced their target site at the 100th annual American Geophysical Union conference in San Francisco. Named Nightingale, the area is near Bennu’s north pole and lies inside a small crater within a larger crater.

Check out my view of Nightingale. pic.twitter.com/aUOsFBXBg9

“We made our final decision based on which site has the greatest amount of fine-grained material and how easily the spacecraft can access that material while keeping the spacecraft safe,” said Dante Lauretta, the mission’s principal investigator and a planetary scientist at the University of Arizona in Tucson.

Dr. Lauretta also said that the site’s scientific value was high because of the northern latitude. Colder temperatures there mean more of the material the spacecraft collects could be preserved from when the asteroid first formed.

Bennu is one of a class of near Earth asteroids known as known as carbonaceous, because they are rich in carbon, organic material like hydrated minerals. It is thought to be one of the oldest rocks formed during the earliest days of the solar system, some four billion years ago. There is a small chance Bennu could collide with Earth, but not until the 22nd century should that occur (The asteroid is too small to extinguish most life on Earth, but it would be catastrophic where it struck.)

Just over a year ago, after a journey of 1.2 billion miles, Osiris-Rex arrived at Bennu and quickly got to work examining the diamond shaped asteroid. As it sped closer, the team was hoping the surface would reveal large swaths of smooth terrain from which to collect a sample.

However, in true space exploration fashion nothing went as planned.

It turned out Bennu was covered in massive boulders stories high as well as other large rocks that posed a continuous challenge for site selection.

“It was kind of the worst case,” Dr. Lauretta said in an earlier interview. “When we were approaching the asteroid, we thought we were going to see the site from a thousand kilometers out and it was going to be this nice big patch. It’s going to be pretty clear. Yes, that’s where we’re going! There was nothing like that, it was just rock after rock after rock.”

Osiris-Rex will only land on the surface of Bennu for a split second next year, deploying an arm with its sample collection too, called Tagsam, to quickly snatch a sample before heading back to a safe distance. The asteroid’s diverse and rocky terrain posed risks to a safe landing. It also creates technical challenges for the Tagsam tool, which is only able to collect objects as big as about an ¾ of an inch across.

During the last year in orbit, the team have been working nonstop to analyze the entire surface, creating detailed maps of images, temperatures and nearly every single rock.

“We went through a massive campaign to globally map the asteroid and have been synthesizing all of that data to get down to our final sample site selections,” Dr. Lauretta said.

He added, “We started out with 50 potential sites and then I kind of set it up like a tournament. We got down to the sweet 16 and then we got down to the elite eight and then the final four,” which like Nightingale were all named for birds.

Osiris-Rex has been orbiting Bennu at a snug distance of 2,230 feet above the surface. This cozy orbit has helped the team discover interesting things about this ancient asteroid, such as evidence of the asteroid shooting rocks into space. They also found water, hinting that asteroids like Bennu really could be the precursors for life in the solar system as well as our oceans.

“Even though it’s turned out to be an operationally challenging target, it is absolutely the right science target,” Dr. Lauretta said.

In the coming months, the team will run what they call “dress rehearsals” with the spacecraft and its instruments, preparing for the real sample collection next July. If everything goes well and Osiris-Rex will collect some of Bennu, store it and head back toward Earth in March 2021.

Before Osiris-Rex gets home, another spacecraft from Earth will return samples from a different near-Earth asteroid. Hayabusa2, a robotic probe built by Japan, spent much of the past year punching holes in a space rock called Ryugu while collecting multiple samples from its surface. The spacecraft left Ryugu earlier this month, and is journeying home to Earth where it will attempt to drop off its cache of specimens next November or December.