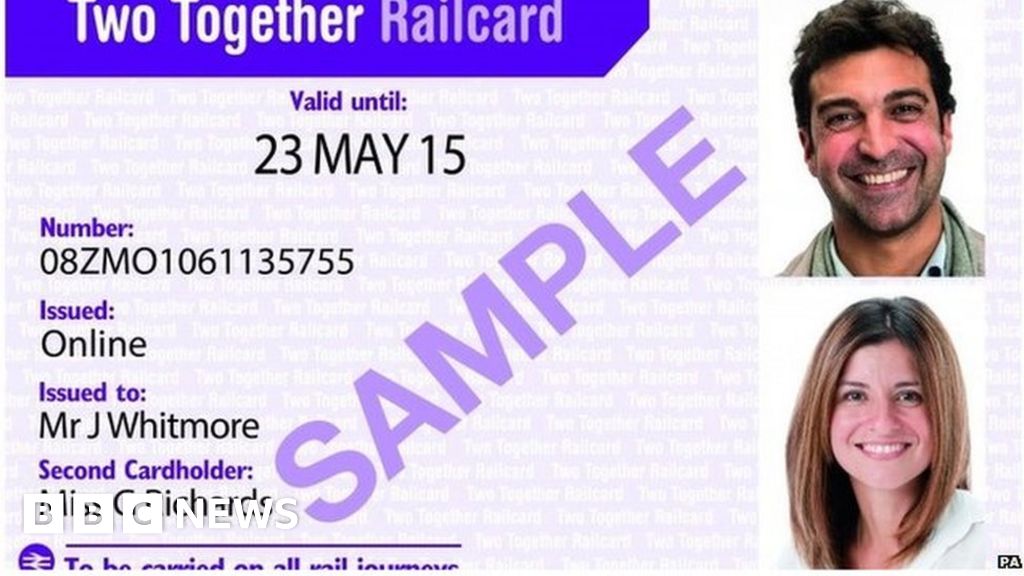 National Rail has apologised for "technical issues" which meant some railcards were issued with photographs missing.

Customers who bought "Two Together" railcards online complained that only one person was pictured on them instead of two.

Other customers have experienced problems receiving their railcards and getting through to the company.

National Rail says it is working hard to fix the issues.

Stephen Drury from Wakefield bought a Two Together railcard through the Railcard website.

It allows a third off rail fares for two named people when they travel together and the card is supposed to include both of their photographs.

But after downloading the new railcard onto his smartphone, Stephen noticed something important was missing.

"I was quite astounded to find that the Mrs wasn't on it. I was the only person on it. It was quite baffling to be honest. How on earth can it process a Two Together railcard with only one person on? It's ridiculous," he said.

Mike from Sheffield told Radio 4's You & Yours that a similar thing happened to him. He was worried because he had already bought train tickets to London which he thought would not be valid with a Two Together railcard that did not include a picture of his girlfriend.

After failing to get through to the Railcard team on their telephone line, their website or via email, he cancelled his discounted tickets and got a refund.

"I've now had to re-buy them at the increased price just so I have that peace of mind travelling without needing a Railcard. I still haven't had any feedback from the Railcard team at all and I feel a bit stuck," he said.

National Rail said the problem with people's photographs has now been solved and they are reissuing these cards where possible. Alternatively, people can get a refund and reorder their card.

Other problems with processing some railcard applications online are continuing though.

The company has posted the same message on its websites for different railcards including those for older people, "Family & Friends" and those aged 16-25, and has blamed "website maintenance issues".

The message advises people to buy or renew railcards at ticket offices if they are due to travel soon.

Jane Openshaw from Egremont in Cumbria was worried after her new "Disabled Persons Railcard" did not arrive in the post and she could not get through to anyone to chase it up.

It was only after the BBC contacted National Rail that her application was processed and sent out by special delivery.

National Rail said anyone who has bought a railcard but has yet to receive it can still travel but they need to carry email confirmation of their railcard purchase with them which train staff have been briefed to accept as proof.

A National Rail spokesman said: "We recently carried out planned maintenance of our Railcard website to help improve how people buy and renew their cards.

"While the vast majority of customers are not experiencing problems, some technical issues mean that people making certain types of transaction are encountering problems. We're extremely sorry for the inconvenience this has caused and we are working hard to fix the issues.