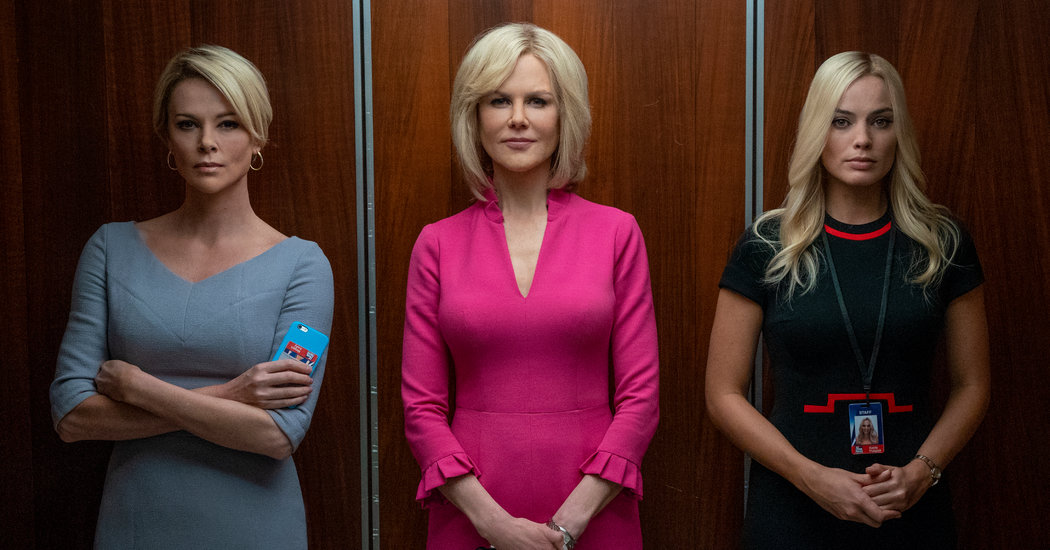 Bright and bouncy until it turns grim, “Bombshell” is a fictionalized account of the women who brought down Roger Ailes, the chairman and chief executive of Fox News. Helped bring him down is probably more accurate given that he was ousted by Rupert Murdoch, who founded Fox News in 1996 before handing the reins to Ailes. Since then, the network has become a ratings powerhouse and hothouse of right-wing talking points, a sea of white faces and dolled-up women in skirts and high heels. Ailes is now gone but the talking points, high ratings, skirts and heels remain.

The movie’s title is clever, cleverness being its modus operandi. The story, after all, is about female employees who, with icy smiles and iron ambition, worked for a conservative political force who institutionalized the harassment of women. So, how do you make heroines out of characters that some in the audience will see as deeply compromised if not outright villainous? For starters, you cast on the offensive by having Charlize Theron play Megyn Kelly, Nicole Kidman do Gretchen Carlson and Margot Robbie break hearts as the fictional Kayla Pospisil.

The stars, with their unimpeachable talent, filmographies and feminist cred, are a shrewd way of blunting skepticism. Even so, the characters are tricky, especially Megyn and Gretchen, who come with ideological baggage that complicates Hollywood’s holy grail of relatability. The movie wants, needs us to like them, which may be why it breaks the fourth wall early on with Megyn directly address the audience, looking into the camera as she tours the network offices in a slightly tight red, white and blue dress. One man yells out a compliment, another looks her up and down. She keeps on walking, focused, hips swinging like knives.

Having her talk to the viewer immediately makes the audience part of a very special Megyn Kelly tour group. It creates intimacy, almost a little conspiracy between you and her, so when she starts chatting about Roger (John Lithgow, galumphing with verve), including his history advising Richard M. Nixon, Ronald Reagan and George H.W. Bush, you lean in and listen. Tell us more. You’re getting the inside dope from one of the network’s biggest stars. When Megyn says that Roger is always watching and we see the many surveillance monitors inside his own personal panopticon, it brings a shiver. Tell us everything.

Directed by Jay Roach, from a script by Charles Randolph (“The Big Short”), “Bombshell” opens not long before the first Republican presidential candidates’ debate in August 2015. Kelly moderated it with two other Fox News anchors, but she was the one who drew national attention because of her questioning of Donald J. Trump and what it wrought. “You once told a contestant on ‘Celebrity Apprentice’ it would be a pretty picture to see her on her knees,” Kelly said. “Does that sound to you like the temperament of a man we should elect as president?” Afterward, Trump said she had “behaved very badly” and went on a Twitter rampage against her.

Here’s the thing about sexism: It doesn’t discriminate. It’s an equal opportunity prejudice that cuts across history, culture, political affiliation. “Bombshell” gets this. And part of what works in the movie is that it does a good job of presenting the ordinary assaults that women, even those with great privilege, can endure simply to get through a day, including dehumanizing “compliments.” When Megyn walks through the network as men size her up, she doesn’t break stride. She keeps marching. She’s a warrior and Theron makes you believe that with her ramrod posture and absolute assurance, Megyn could lead an army or maybe a rebellion, if she chose.

Will she or won’t she? That’s the question teased for a long time in “Bombshell,” which gains steam as Trump’s assault stirs up trouble for Megyn. (Roach incorporates archival material of the real candidate throughout, amping up the movie’s historical bona fides.) Narratively, Megyn’s insistence on calling Trump out for his treatment for women — and then dealing with the ominous backlash — becomes a prelude to the looming crisis with Roger. She is the network’s biggest female star and she’s willing to take on a presidential candidate; as Roger says, it’s good TV. But when Gretchen sues Roger for sexual harassment, Megyn at first lets the other woman twist in the wind.

Roach started out directing comedies and his background generally works for him in “Bombshell,” which he gives a lightness of touch in the beginning that promises (rightly, sometimes wrongly) everything will work out just fine. He even brings a sense of breezy fun to Fox that suggests everyone will soon be amusingly skewered. (The cinematographer Barry Ackroyd brings the texture, shadows and professional sheen.) With its big hair, shiny sets and the gun-packing Sean Hannity, the network is grist for parody, though it can be tough to tell who’s in on the joke. (The cast includes Kate McKinnon, Richard Kind, Allison Janney and a devilish Malcolm McDowell.)

“Bombshell” works as well and as long as it does largely because of its actors, Theron most of all. One of her qualities as a performer is that she never begs for the audience’s love. She can come across as remote, but she also reads as supremely self-contained: She’s a fortress of one. She shows you her characters’ existential isolation, which is often where their humanity lies. You see that in “Bombshell,” which strengthens its realism and is finally more impressive than the prosthetics she wears that, with a husky scrape in her voice, turn her into Kelly’s uncanny double. Even when the movie puts some feminist-lite uplift on this ugly world, Theron doesn’t soften Megyn.

Kidman is comparatively sidelined, though it’s Gretchen who knocks over the first domino. (The Showtime limited series about Ailes’s downfall, “The Loudest Voice,” foregrounds Carlson.) For the most part, Kidman plays Gretchen sincerely, though Roach over-sentimentalizes the character, especially with periodic cutaways to her children. But Kidman also makes Gretchen ever-so-slightly ridiculous, adding a sharp sliver of comedy that underscores how self-serving and futile her rebellious gestures at the network are, like when she appears on camera wearing no makeup. You will never win the war, the movie implies, by working for the enemy.

That critique only goes so far in “Bombshell,” which finally can’t deal with the story’s uncomfortable contradictions. So instead it makes you cry, notably with Kayla, a self-described evangelical millennial in the “Jesus space.” Robbie deepens the movie’s emotional stakes as its persuasively sweet golden girl, who is brutalized by Roger. Roach handles this well enough, including in an upsetting scene in which Roger orders her to bare her white panties, a queasy emblem of surrender. But it is Robbie — with her panicked, darting eyes and tensely resistant, then capitulating physicality — who conveys the horror of sexual harassment, a degradation that seeps into body and soul.

Kayla is the movie’s sacrificial lamb and, to an extent, a representation of female victimization and innocence. The problem in “Bombshell” is that Megyn and Gretchen have for years gone along with abusive male power to get along, at least while it was expedient for them. The movie personalizes this by having one woman call out another late in the story, rightly saying that if someone had sounded the alarm earlier maybe other victims might have been spared. But that wasn’t in Megyn and Gretchen’s self-interest, a truism that the movie can’t fully face. Ailes was awful, but he also had a lot of smiling help from the very women he made rich and famous.