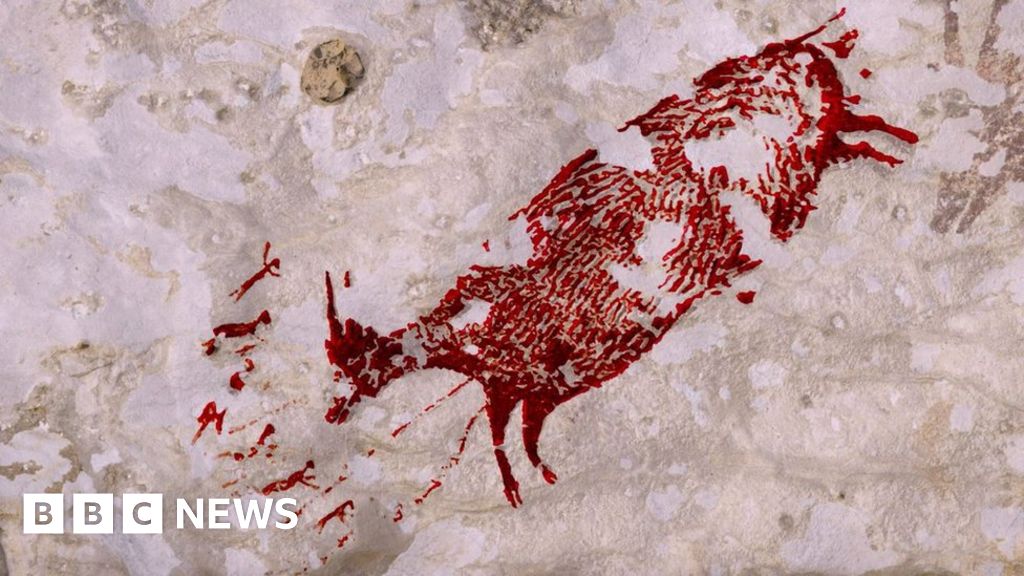 A painting discovered on the wall of an Indonesian cave has been found to be 44,000 years old.

The art appears to show a buffalo being hunted by part-human, part-animal creatures holding spears and possibly ropes.

Some researchers think the scene could be the world's oldest-recorded story.

The findings were presented in the journal Nature by archaeologists from Griffith University in Brisbane, Australia.

Adam Brumm - an archaeologist at Griffith - first saw the pictures two years ago, after a colleague in Indonesia shimmied up a fig tree to reach the cave passage.

"These images appeared on my iPhone," said Mr Brumm. "I think I said the characteristic Australian four-letter word out very loud."

The Indonesian drawing is not the oldest in the world. Last year, scientists said they found "humanity's oldest drawing" on a fragment of rock in South Africa, dated at 73,000 years old.

What do the drawings show?

The drawings were found in a cave called Leang Bulu'Sipong 4 in the south of Sulawesi, an Indonesian island east of Borneo.

The panel is almost five metres wide and appears to show a type of buffalo called an anoa, plus wild pigs found on Sulawesi.

Alongside them are smaller figures that look human - but also have animal features such as tails and snouts.

In one section, an anoa is flanked by several figures holding spears.

However, other researchers have questioned whether the panel represents a single story - and say it could be a series of images painted over a longer period.

"Whether it's a scene is questionable," says Paul Pettitt, an archaeologist and rock-art specialist at Durham University told Nature.

The team analysed calcite "popcorn" that had built up on the painting.

Radioactive uranium in the mineral slowly decays into thorium, so the team measured the levels of different isotopes of these elements.

They found the calcite on a pig began forming at least 43,900 years ago, and the deposits on two buffalo were at least 40,900 years old.

There are at least 242 caves or shelters with ancient imagery in Sulawesi alone - and new sites are being discovered annually.

How does it compare to other prehistoric art?

"Previously, rock art found in European sites dated to around 14,000 to 21,000 years old were considered to be the world's oldest clearly narrative artworks," said the paper in Nature.

The Sulawesi drawings could also be the oldest animal drawing ever found.

Last year, a cave painting in Borneo - thought to be the oldest of an animal - was found to be at least 40,000 years old.