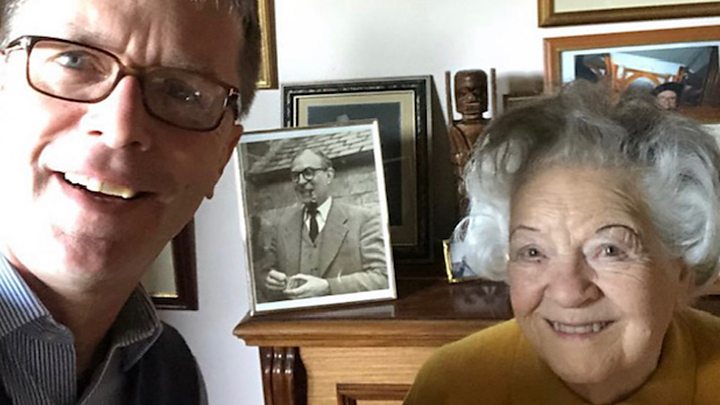 BBC Radio 5 Live's Nicky Campbell has written a heartfelt tribute to his "wonderful" mother, Sheila, who has died aged 96.

Along with her husband, Frank Campbell, she adopted Nicky as a four-day-old baby in 1961.

Sheila Campbell, a World War 2 radar operator who became a social worker, was part of Nicky's 2007 episode of BBC One's Who Do You Think You are.

"The day she and Dad adopted me was the day I won the lottery," he tweeted.

He had been due to co-present 5 Live's Breakfast show with Rachel Burden.

Campbell said Sheila "doted on her grandchildren and my girls completely adored her. Everyone did."

Earlier this year, Sheila appeared on Campbell's 5 Live show to talk about her role in the Women's Auxiliary Air Force during World War 2.

Stationed at Beachy Head, she helped to guide RAF planes to their targets during the D Day campaign.

She was proud to have played a part in the invasion, but said she would spend the 75th anniversary "thinking a lot about the lives that were lost on the beaches, and at that time".

Who Do You Think You Are saw Campbell investigate the roots of his Scottish family, especially his adoptive father, Frank, who died in 1996.

'So proud' of his family

He discovered more about his father's time serving with the Indian army during World War 2 - fighting Japanese troops in what has come to be known as "the forgotten war"; and had some shocking revelations about his grandfather's childhood.

Summing up the experience, he said: "I'm so proud of this extraordinary family I was adopted into. All the stories I've heard somehow all contributed to making my dad the most wonderful dad that I could have had."

"It couldn't have been for me more fascinating, revealing and enlightening. A family of which I am so proud and a dad of which I'm so proud. I just wish he were here to share it."