Christine Lagarde Begins to Chart a Course at the E.C.B. 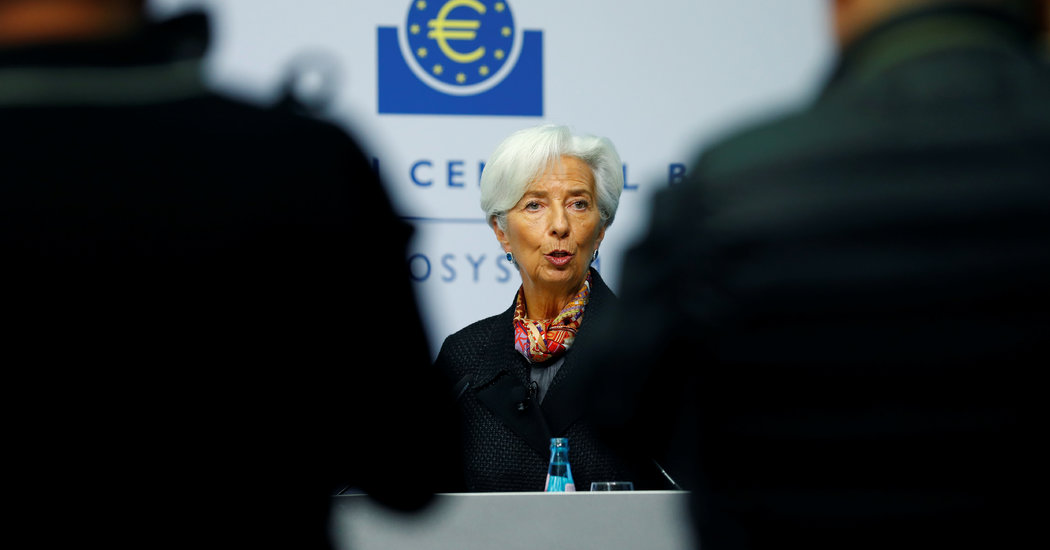 Christine Lagarde Begins to Chart a Course at the E.C.B.

FRANKFURT — Christine Lagarde is one of the most recognizable people on the world stage, but as president of the European Central Bank, a job she began six weeks ago, she is a cipher.

That could begin to change Thursday when Ms. Lagarde holds her first news conference as leader of the institution that has often determined Europe’s economic fate.

The event will follow a meeting of monetary policymakers. Analysts and investors will be listening intently for clues about her opinions on questions such as whether the central bank’s fire hose of economic stimulus has begun to do more harm than good.

For all her prominence, no one knows what kind of central banker Ms. Lagarde will be. Before beginning work at the European Central Bank on Nov. 1, she spent eight years as managing director of the International Monetary Fund. In that job, she was often in the thick of the action during a financial crisis or debt meltdown. She was one of the world’s most powerful women.

But until last month she had never worked as a central banker, and unlike many in the profession, she has never been an economics professor whose published research would reveal her worldview.

In public appearances so far, including a question-and-answer session with members of the European Parliament, she has stuck to the course articulated by her immediate predecessor, Mario Draghi. That course commits the central bank to ample monetary stimulus for the foreseeable future.

But Ms. Lagarde has also signaled that she will question the assumptions underlying central bank policy since the euro began to circulate two decades ago.

She is overseeing a comprehensive review of central bank strategy that could redefine its role. “What the outcome will be, we do not know at this stage,” Ms. Lagarde told European Parliament members in Brussels last month, “but clearly every stone will have to be turned and every option will have to be examined.”

There is a lot to talk about. Despite record doses of monetary stimulus under Mr. Draghi, inflation remains well below the European Central Bank’s target of 2 percent. Among economists and many central bankers, there is a growing feeling that the stimulus has become counterproductive.

Extremely low interest rates have made borrowing cheap and encouraged lending, which is the point. But low rates have also cut into bank profits. Some economists argue that banks in countries like Germany have no reason to issue credit because they can no longer make money doing so.

“We have overstretched the use of monetary policy,” Eric Dor, the director of economic studies at IÉSEG School of Management in Lille, France, told reporters in Frankfurt on Wednesday.

The low rates have been a boon for debt-burdened governments and companies, but there is growing concern that easy money is fueling real estate bubbles in places like Germany, and encouraging insurance companies and other investors to buy too many risky assets.

Ms. Lagarde must try to reconcile that dilemma while also healing differences within the European Central Bank’s Governing Council, which sets policy. There is an open rift between members from northern countries who would like to see stimulus reduced and those from southern countries eager to keep it flowing.

The strategy review, of uncertain duration, is likely to focus on the central bank’s approach to inflation. By law, the European Central Bank is required to guard price stability. But it has discretion to define what that means.

Since the last strategy review, in 2003, the monetary policymakers based in Frankfurt have promised to keep the annual inflation rate “below, but close to, 2 percent.” Some inflation is considered a good thing because it provides a comfortable buffer against deflation, a downward spiral of prices that can lead to economic depression.

Some economists, such as Otmar Issing, the European Central Bank’s former chief economist, say the bank should give up trying to hit the 2 percent target, which it never succeeded in doing consistently under Mr. Draghi. Fear of deflation is overblown, Mr. Issing and others argue, and there is nothing wrong with low inflation.

Another group, whose most prominent member is Olivier Blanchard, former chief economist of the International Monetary Fund, argue for an inflation target as high as 4 percent in boom times. The theory is that a higher target would encourage companies to raise prices, while giving the central bank more space to cut interest rates in bad times.

Carsten Brzeski, the chief economist at ING Germany, suggested that the central bank could buy itself more flexibility by simply promising to keep inflation “around 2 percent.” That may seem like an insignificant change, but it would allow the central bank to overshoot the target when necessary to compensate for a long period of meager inflation.

Where Ms. Lagarde stands in this debate is not clear. But those who scrutinize central bankers’ utterances detect signs that she is concerned about pernicious consequences from measures to push up the inflation rate.

As evidence, analysts point out that during a speech in Frankfurt last month, Ms. Lagarde said the European Central Bank “will continuously monitor the side effects of our policies.”

Because Ms. Lagarde is so new to her job, the experts are not sure how much weight to give such comments.

“Expect a lot of second-guessing of Lagarde,” economists at Deutsche Bank said in a recent note to clients, “as the market gets used to her communication nuances.”