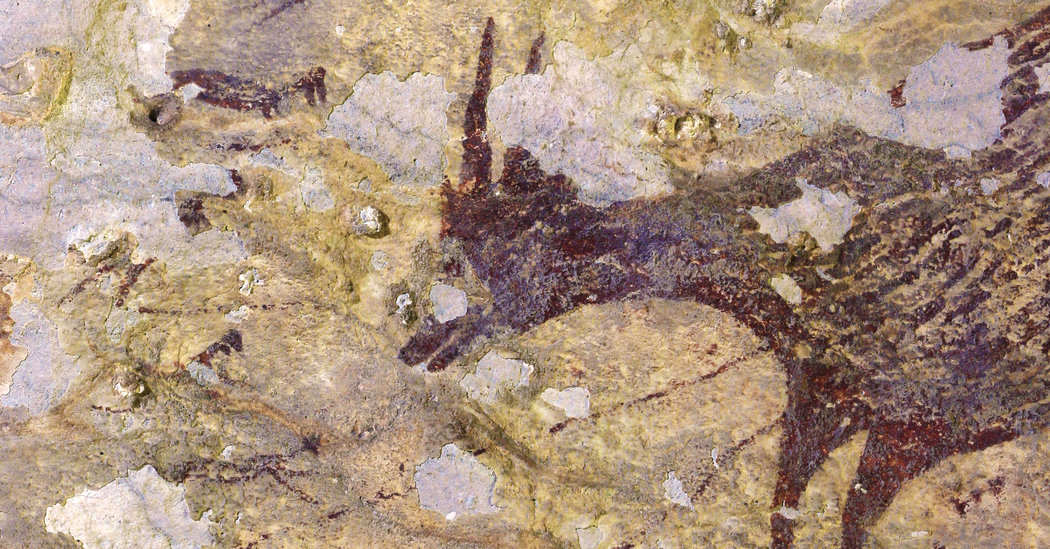 In December 2017, Hamrullah, an archaeologist on an Indonesian government survey, was exploring a cave system in Sulawesi, a large island in central Indonesia. He noticed a tantalizing opening in the ceiling above him. A skilled spelunker, Hamrullah (who only uses one name, like many Indonesians) climbed through the gap into an uncharted chamber. There, he laid eyes on a painting that is upending our understanding of prehistoric humans.

The dramatic panel of art, dating back at least 43,900 years, is “the oldest pictorial record of storytelling and the earliest figurative artwork in the world,” a group of scientists said in a paper published Wednesday in Nature, although additional research will be needed to confirm the age of every character in the painting.

In the story told in the scene, eight figures approach wild pigs and anoas (dwarf buffaloes native to Sulawesi). For whomever painted these figures, they represented much more than ordinary human hunters. One appears to have a large beak while another has an appendage resembling a tail. In the language of archaeology, these are therianthropes, or characters that embody a mix of human and animal characteristics.

Given that these extraordinary characters are wielding thin objects that might represent ropes or spears, the painting may be an artistic demonstration of a game drive, a hunting strategy that involves guiding animals toward an ambush.

The otherworldly nature of the therianthropes also raises the possibility that they are mythical beings, or manifestations of “animal spirit helpers” that are common in shamanic beliefs, according to the study.

“This scene may not be a depiction of an actual hunting scene but could be about animistic beliefs and the relationship between people and animals, or even a shamanic ritual,” said Sue O’Connor, an archaeologist at Australian National University who was not involved in the study.

These interpretations are speculative, however, and the original inspiration for the painting, as well as its significance to the humans who created it, is likely to remain a mystery.

The rock art predates the next oldest representation of a character with a mix of human and animal figures, found in a cave in Germany, by about 4,000 years. It is also more than 20,000 years older than a hunting scene on the walls of France’s Lascaux Cave.

Adam Brumm, an archaeologist at Griffith University in Australia and one of the study’s authors, said his team was “completely blown away” by the painting.

“We had never seen anything even remotely like this before in the hundreds of cave art sites we’d documented” on this Indonesian island, Dr. Brumm said.

“I immediately knew it was special and that it would be a very important site to understand the cognitive evolution of our species,” said Maxime Aubert, a co-author also at Griffith.

The scene is inside the Maros-Pangkep limestone cave system on the island’s southwestern end, which has been a hot spot for archaeologists since the 1950s. Local people in the region were likely aware of the paintings long before that time, however. A modern custom of marking wooden posts with a handprint may even have “some connection with local observations of prehistoric hand stencils in nearby caves,” Dr. Brumm said.

The scientists determined the painting’s age by performing uranium-series dating on “cave popcorn,” or mineral deposits that hang over three of the animal motifs in the scene. That gave it an age of at least 43,900 years old, and possibly older.

“This finding is very significant because it was previously thought that figurative painting dated to a time shortly after modern humans arrived in Europe, perhaps circa 40,000 years ago, but this result shows it has an origin outside Europe,” said Alistair Pike, an archaeologist at the University of Southampton in England, who was not involved in the study.

However, Dr. Pike considered it “very premature” to claim that the scene represents the earliest example of such storytelling, because only the animals in the scene have been definitively dated. It’s possible that the therianthropes, a vital part of the narrative, were added later.

Dr. Aubert said his team thinks the therianthropes were likely painted at the same time as the animal motifs because “they are of the same tone of red and are in a similar state of preservation.”

Very little is known about the people who originally decorated the walls of Maros-Pangkep in red pigment, in part because none of their skeletal remains have been found in the caves. They may have been related to a group of modern humans that migrated to Australia more than 50,000 years ago.

Despite these unresolved mysteries, it is now abundantly clear that these humans were storytellers whose abstract paintings shed light into the origins of human cognition and spirituality.

“Images of therianthropes often have complex meanings in modern religions and folklore,” said Dr. Brumm, who gave the examples of werewolves and the animal-headed deities of ancient Egypt.

“While we can’t know if this was the case in Sulawesi at least 44,000 years ago, we can point to these enigmatic images of therianthropes as the world’s earliest known evidence for our ability to conceive of the existence of supernatural beings,” he said, which is “a cornerstone of religious belief and experience.”

Shigeru Miyagawa, a linguist at the Massachusetts Institute of Technology who was not involved in the study, suggested that the painting could have implications for understanding humanity’s “unique capacity to communicate using intricate language.”

The painting has galvanized archaeologists to continue mapping the vast, unexplored reaches of the Maros-Pangkep caves, where the art is fading, “at an alarming rate” for unknown reasons, Dr. Aubert said.

These imaginative landscapes adorned Sulawesi’s caves for 44 millenniums, but they could vanish soon after they were rediscovered. At this point, they are the only link to this early culture that dreamed up fantastic beings and visualized the thrill of the chase — two activities that still preoccupy humans today.

“We also need to understand why it is deteriorating so rapidly and maybe we will find ways to save it,” Dr. Aubert said.