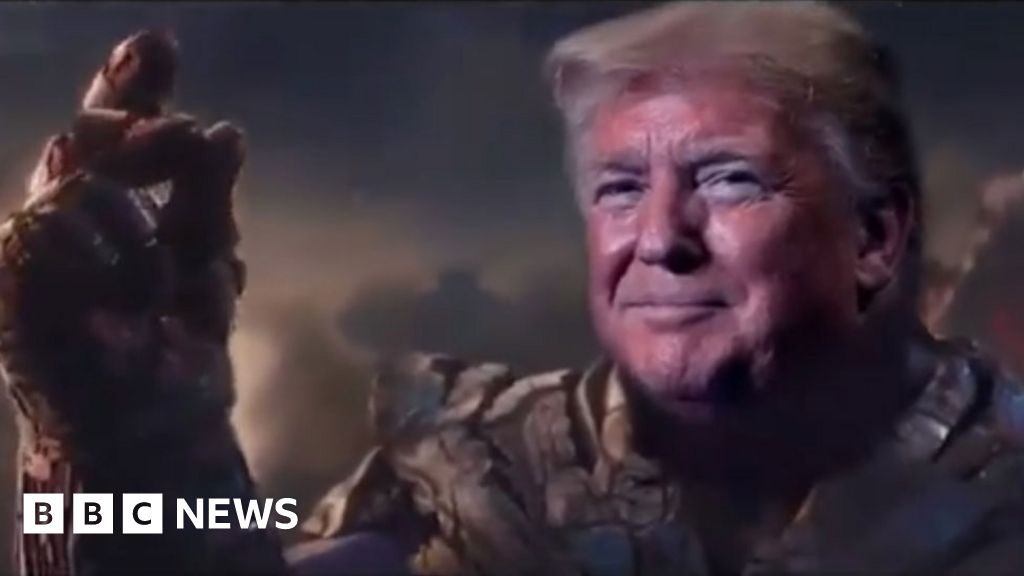 Imitation, they say, is the most sincere form of flattery, but recycling pop culture for politics can backfire.

On Tuesday, the creator of Thanos called US President Donald Trump a "pompous fool" after his team used the Marvel villain in a campaign video.

It then showed him declare his re-election in 2020 "inevitable", clicking his fingers to wipe out his political opponents in the process.

"After my initial feeling of being violated, seeing that pompous fool using my creation to stroke his infantile ego, it finally struck me that the leader of my country and the free world actually enjoys comparing himself to a mass murderer," said Jim Starlin, who introduced Thanos in the 1970s.

"How sick is that? These are sad and strange times we are going through. Fortunately, all things, even national nightmares, eventually come to an end," he told The Hollywood Reporter.

Starlin originally came up with supervillain in 1973, when he made his first appearance in The Invincible Iron Man book story.

The tweet from the Trump War Room account, which describes itself as being "managed by the #TeamTrump 2020 campaign", showed Mr Trump as Thanos, obliterating a group of Democratic politicians holding a news conference to announce articles of impeachment against the president.

The scene comes from Avengers: Endgame, when Thanos says "I am inevitable" and snaps his fingers in an attempt to destroy half of all life in the Universe, only to discover his gauntlet no longer has the power.

The responses on Twitter included one from historian and author Kevin M Kruse, who noted: "You've made Trump a supervillain and depicted him in the scene where his plan to kill everyone in the universe falls apart due to his arrogance and incompetence."

Another, operating under the name YGallanter, suggested the latest tweet - just like Trump's recent photo showing his head on Rocky's body - was a method of "trolling" and "triggering libs", referring to liberals.

The POTUS isn't the first and won't be the last politician to harness pop culture for their own ends in an attempt to make them seem more relatable to the voting public and get their message to go viral in a social media age.

However, the politicising of much-loved characters, movies, songs and games is often met by a backlash.

A quick scroll through the replies shows many were not happy with his use of the much-loved film.

Labour leader Jeremy Corbyn, meanwhile, was up to something similar on the same day.

Mean Tweets With Jeremy Corbyn, which saw him read out Twitter users' unflattering comments about him, is ripped from US chat show Jimmy Kimmel Live, where pop stars are usually in the hot seat, as opposed to political figures.

Can politicians borrow from films and TV?

Martin Kretschmer, professor of intellectual property law at the University of Glasgow, tells BBC News the videos by the president and the prime minister are "very different" under copyright rules.

"Boris Johnson's spoof of Love Actually is not a copyright infringement," he explains.

"It imitates a style, a format. No substantial part of Love Actually is taken.

"This is different for the Trump twitter video, modifying a scene from the Avengers: Endgame movie. Here a substantial part of the movie is copied. So this would be a copyright infringement unless a defence or exception was available."

"Copyright is a territorial right, and in each country the outcome of such an assessment would be different. In the US, there is a very strong First Amendment right protecting freedom of speech and a flexible 'fair use' defence to copyright infringement.

"Trump could claim his twitter video was a parody, and fall under the 'fair use' exception."

Furthermore, he says, there is an "important distinction" legally between a "target parody" - which makes fun of a copyright work, such as a film or piece of art - and a "weapon parody", which uses a work to make a separate point that has little to do with the actual work.