Can governments ever run out of money? 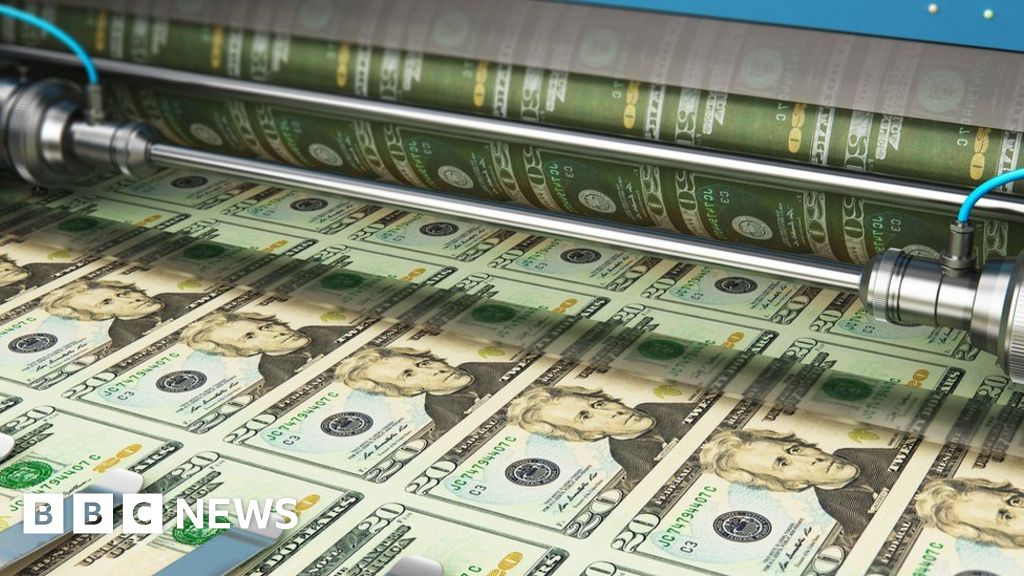 Can governments ever run out of money?

In the UK and US, political parties are promising spending splurges to appease voters after a decade of squeezes.

Whether it's more nurses, frozen tax promises, free broadband internet or more social housing in the UK; or tax cuts and green energy investments in America, public spending is set to surge.

This sudden abandonment of fiscal rectitude comes amid the rise in prominence of a way of thinking about money, spending and the economy - Modern Monetary Theory (MMT).

According to its key architect, US businessman Warren Mosler, it is based on a simple idea - that countries that issue their own currencies can never run out of money in the same way a business or person can.

This is important to understand because it means when someone says the government can't do something for want of money, that's simply not applicable, says Mr Mosler. A government can no more run out of money than a football stadium can run out of goals scored.

The theory has become popular among economists and political thinkers, particularly on the left - such as rising star of the US Democrats Alexandria Ocasio-Cortez.

Using MMT as a basis, they argue that countries should be able to borrow and spend more freely, and not be as concerned by things like the national debt or the deficit - the difference between a government's income and outgoings.

The idea is fiercely contested.

"I'm not a fan of MMT - not at all," billionaire investor Warren Buffett told Bloomberg News in March.

MMT is "wrong" Federal Reserve chairman Jerome Powell said a month before that.

But MMTers say they do believe in being fiscally responsible, and that critics misunderstand.

The story starts with any government's desire to fund public services, which it does through taxation. Citizens need money to pay that tax, and they work to get it, Mr Mosler says.

However, rather than this money appearing from thin air, he says, "all the funds to pay taxes come only from government or its agents" because they will have printed or minted it.

The government will also have had to spend that newly issued cash in the first place, so it can find its way into the economy and the public can get their hands on it.

"Every member of parliament will tell you we have to get money first by taxing to be able to spend. And what we don't get by taxing we have to borrow in the market and pay interest," Mr Mosler says. "It's not true."

As such, he says the tax-and-spend orthodoxy embraced by most governments should be rethought. What's actually going on is spend and tax, which paints guiding economic principles such as the debt and deficit in entirely different lights.

MMT also challenges the long held assumption that governments need to borrow money from international markets to get what they need. Mr Mosler calls the idea "an anachronism" - countries can instead just print what they need.

Critics see such ideas as far too radical, saying they would be damaging and lead to sky-high inflation. But similar principles have actually played a huge role in stabilising the global economy since the financial crisis of 2008.

Who is Warren Mosler?

Mr Mosler started off his financial career in banking in 1973 collecting loans at the Savings Bank of Manchester in Connecticut. As well as managing money, he has also built supercars and a ferry. He sold his car businesses and a bank he owned in 2013.

He operates from his base in the US Virgin islands.

Central banks have pumped some $11tn into the world's financial system by buying up government bonds and corporate debt through what is known as quantitative easing (QE).

During that time inflation has remained subdued. Among the G7 group of large economies, Canada currently has the largest annual price increases at a manageable 1.9%.

And while MMTers argue QE has driven up asset prices, worsening inequality, they believe this could have been remedied by more generous government spending - something they believe is necessary to help economies in crisis recover.

This has led some to liken MMT to the work of late British economist John Maynard Keynes, who also argued that economies in crisis should spend more in order to revive growth.

Now, after a decade of cuts and austerity, politicians of all stripes seem content to spend, and discussions about MMT have entered the spotlight.

In the UK, Conservative and Labour politicians have promised hundreds of billions of pounds of extra spending ahead of the 12 December general election. In the US, public debt hit a record $22trn in February following hefty tax cuts brought in by the Trump administration.

But Jo Michell, associate professor in economics at the University of the West of England, Bristol says fans of the theory - many of whom share their views online - can be quite uncompromising.

"There's a very vocal online movement to really push MMT and any criticism is very strongly acted against," he says. "It does become quite unpleasant."

There are more technical criticisms of the theory too. Some argue that if governments simply print money to fulfil their needs, then interest rates will languish around zero - something that has been a by-product of QE.

As a result, anyone trying to save will find it extremely difficult to grow their money.

"What does that do to your pension fund system, insurance, banking, the entire basis of the financial system?" asks Prof Michell.

"My view is you need both monetary and fiscal policy and you should not hobble either," she says.

Despite the reservations, MMT is winning some grudging respect in the financial services sector.

"Conventional thinkers are wrong to dismiss MMT out of hand. But we must consider long and hard the institutional framework we need if the central bank is going to provide the financing for a big increase in government spending," said Jamie Dannhauser, economist at UK money manager Ruffer.

He worries that by going down a path of high government spending - backed up by printed money - we may not have the ability to "press the brake again" if there is a crisis.

He also believes having politicians in charge of printing money to finance government spending is a foolish idea. A body independent of government, whose sole focus is the national interest, has to have the power to reverse the economic thrusters, he says.

Politicians, focused on the short-term electoral cycle, cannot be counted on to do this, he adds.

The debates over MMT look set to rage on as more prominent people come out to back it.

Ms Ocasio-Cortez told Business Insider in January, MMT "absolutely" needs to be "a larger part of our conversation".