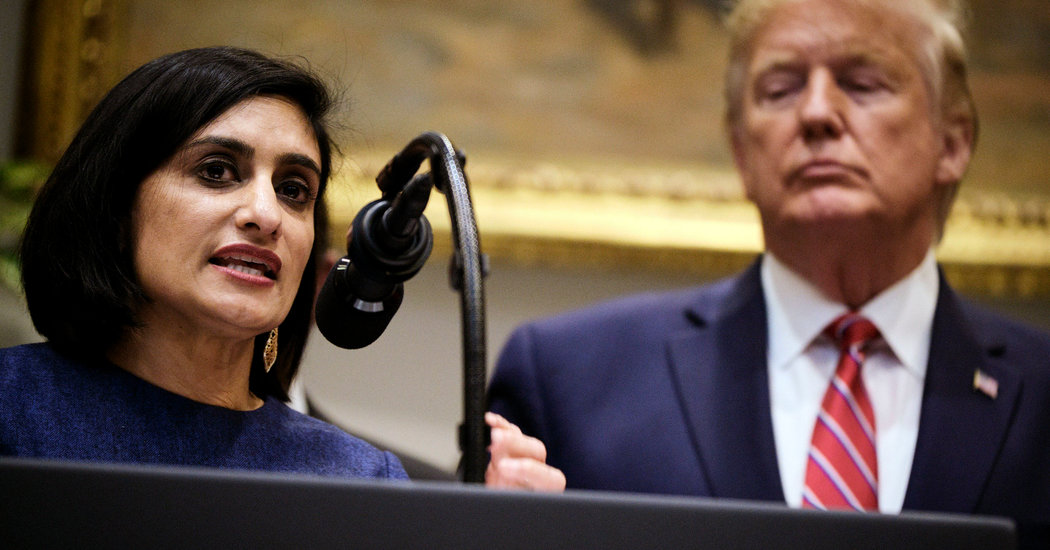 The acting White House chief of staff has summoned President Trump’s top two health policy officials to the White House on Thursday to assess whether the president’s health secretary and his Medicare chief can continue to work together, a senior administration official confirmed on Tuesday.

White House aides said President Trump is still standing by his embattled administrator of the Centers for Medicare and Medicaid Services, Seema Verma, amid reports that she had requested that taxpayers reimburse her $47,000 for property stolen on a trip, including jewelry priced at more than $40,000.

But her feud with Alex M. Azar II, the health and human services secretary, has reached the president’s desk and the attention of the acting White House chief, Mick Mulvaney. For now, Mr. Trump is not expected to attend Thursday’s session, the official said, but he could stop by.

Ms. Verma’s reimbursement request, reported in Politico over the weekend, was the latest revelation in a string of reports that have portrayed the upper echelons of the Department of Health and Human Services as divided on policy and personality, and roiled by expenditures that have come under scrutiny.

A particular sore point has been the decision by Ms. Verma, who heads a trillion-dollar agency within the Health and Human Services Department, to spend millions of taxpayer dollars on contracts with communications consultants, in part to raise her public profile. The contracts are now under review by the department’s inspector general.

But the long-simmering rivalry between Ms. Verma and Mr. Azar II is also causing problems. The feud burst into the open after reports in Politico and Axios.

Then came news that Ms. Verma sought reimbursement of $43,065 for more than 20 pieces of jewelry, including an Ivanka Trump-branded pendant, about $2,000 for clothes and $2,000 for other stolen goods, including $325 for moisturizer and $349 for noise-canceling headphones.

“It’s perfectly appropriate that the administrator filed a personal property loss claim for goods stolen while on work travel, and this is not an unusual practice for federal employees,” the Health and Human Services Department said in an emailed statement, which concluded that the law makes clear that jewelry would not be eligible for reimbursement. Ms. Verma was ultimately reimbursed $2,852.40.

The fighting between Ms. Verma and Mr. Azar has forced Mr. Trump to intervene, a development first reported by Axios last week. The president and Vice President Mike Pence have told Mr. Azar and Ms. Verma to find a way to work together, a senior administration official said.

Ethical disputes that have burst forward in the past have cost some administration officials their jobs. Mr. Trump’s first health secretary, Tom Price, resigned amid accusations that he inappropriately used expensive private charter flights at taxpayer expense. His first Environmental Protection Agency chief, Scott Pruitt, and interior secretary, Ryan Zinke, were also forced to resign amid accusations that they had abused the taxpayers’ trust.

Beyond allegations of unwarranted expenditures, the Health and Human Services Department is also contending with reports of serious policy conflict, including one dispute that may be delaying a promised plan to replace the Affordable Care Act. Should either Mr. Azar or Ms. Verma depart any time soon, it would create a significant headache for the administration during the impeachment hearings and as Mr. Trump prepares for the election, in which health care is expected to play a major role.

The loss of either official could weaken the administration’s efforts to tackle the high cost of prescription drugs and force hospitals to make public the secret prices they negotiate with insurers, both of which Mr. Trump is hoping to claim as significant accomplishments.

Both the Department of Health and Human Services and the Centers for Medicare and Medicaid Services tried to minimize the disclosure about Ms. Verma’s stolen jewelry on Monday.

Ms. Verma said she was advised by counsel at the Health and Human Services Department to include a full inventory of the items in her luggage. She initially approached her own insurance company but was told to contact her workplace about the lost property, according to her office.

But some of Ms. Verma’s critics argued that it was another example of poor judgment, saying putting in the claim for tens of thousands worth of personal jewelry was at best tone deaf.

Her office also defended her use of outside contractors, saying in a statement that Ms. Verma “wanted to ensure that the agency was communicating with the American people about C.M.S. programs and not just relying on inside-the-Beltway health press.”

The statement, issued by a spokesman for Ms. Verma, also pointed out that she commutes to Washington every week from her home in Indiana, “which is why she was traveling with her personal collection of jewelry.”

Representative Joseph P. Kennedy III, Democrat of Massachusetts, who questioned Ms. Verma at a hearing in October on the contracts with communications consultants, called for her resignation on Monday.

“I feel terrible for her that her items were stolen,” Mr. Kennedy said in a phone interview, “but the idea that taxpayers should be on the hook for that is, I don’t think, accurate or appropriate at all.”

Ms. Verma, whose agency oversees not only Medicare and Medicaid but also the federal insurance marketplace created under the Affordable Care Act, was a health policy consultant for Mr. Pence in his previous job as governor of Indiana. He remains a powerful ally for Ms. Verma, who has pushed hard for a number of Mr. Trump’s health care priorities, such as imposing work requirements on many adult Medicaid recipients and replacing the Affordable Care Act.

Many view her willingness to repeatedly attack the Affordable Care Act and, more recently, Democratic proposals for “Medicare for all,” as winning her points with the White House.

Mr. Azar, a cabinet secretary with a larger portfolio than Ms. Verma’s, is a former senior executive at the drug company Eli Lilly, which is headquartered in Indiana. His top priority as health secretary has been lowering the cost of prescription drugs, for which Mr. Trump wants to be able to claim credit on the campaign trail next year. He has worked in the agency’s top echelons before, during President George W. Bush’s tenure, and is considered more politically moderate than Ms. Verma.

Earlier this year, Mr. Azar lost a battle over one of his main policy goals: eliminating the drug rebates that companies pay pharmacy benefit managers, such as CVS Caremark or Express Scripts, which he saw as a reason for rising drug prices. Mr. Trump killed the proposal in July after fiscal conservatives in the White House raised concerns about the potential costs.