Who’s Spreading Disinformation in U.K. Election? You Might Be Surprised 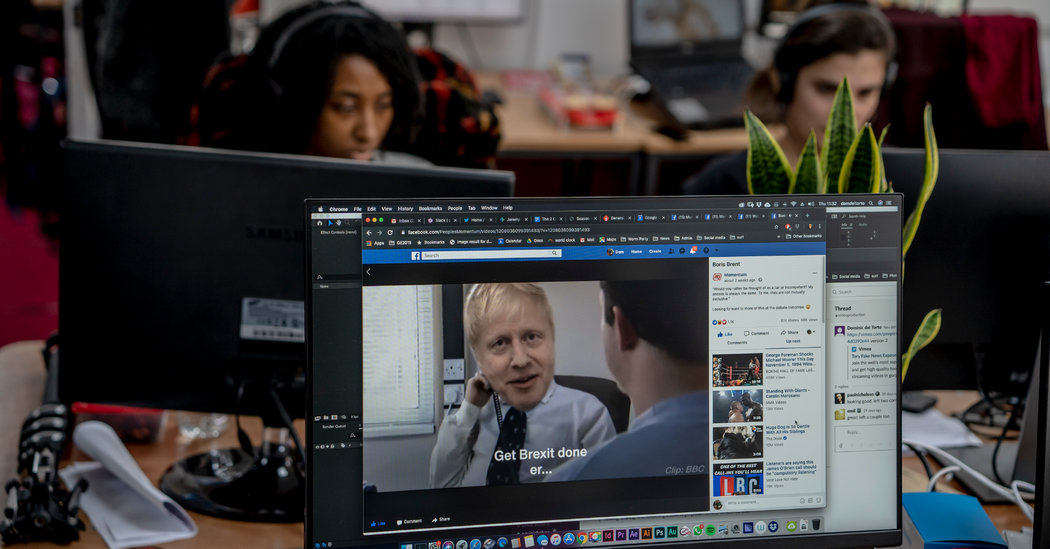 Who’s Spreading Disinformation in U.K. Election? You Might Be Surprised

LONDON — Manipulated Twitter accounts, doctored videos, dodgy websites and questions of foreign meddling. In just six weeks, the campaign leading up to Britain’s general election this Thursday, one of its most important votes in a generation, has had a taste of what the dark arts of online campaigning have to offer.

Some material has originated with shadowy groups or Russian operatives, but a surprising amount of questionable online behavior has come from the political parties and candidates themselves.

Last month, the Conservative Party apologized after spreading a video edited to make it look as though the opposition Labour lawmaker in charge of the party’s Brexit policy could not answer a question about exiting the European Union.

It then dressed up one of its Twitter accounts to look like a nonpartisan fact-check group, drawing a warning from Twitter. Later, Conservatives bought ads on Google so that in searches for Labour’s policy manifesto, the top result was a website that criticized the proposals.

The Labour Party, too, has been tied to the spread of misleading information. Its leader, Jeremy Corbyn, cited documents that suggested the Conservative Party would weaken the National Health Service in a post-Brexit trade deal with the United States. The documents turned out to be linked to a Russian disinformation campaign.

The use of disinformation techniques by political leaders, particularly the Conservatives, led by Prime Minister Boris Johnson, reflects an evolution in how the internet is being used to grab attention, distract the news media, stoke outrage and rally support.

It is not just professionals who are creating false or misleading campaign material online. Just about anyone can put it together, and that is exactly what seems to be happening.

“It’s the democratization of misinformation,” said Jacob Davey, a senior researcher at the Institute for Strategic Dialogue, a London-based group that tracks global disinformation campaigns. “We’re seeing anyone and everyone picking up these tactics.”

Polls suggest that voters are shrugging off accusations of online trickery, as Facebook has said it will not screen political ads for accuracy. Experts said this means the tactics were likely to further enter the mainstream in Britain and elsewhere.

“This is the election where disinformation was normalized,” Mr. Davey said. “A few years ago people were looking for a massive coordinated campaign from a hostile state actor. Now, many more actors are getting involved.”

Britain’s election provides an imperfect comparison to the upcoming presidential election in the United States, where the process lasts more than a year and the campaigns are better funded and more digitally sophisticated.

But the experience in Britain offers a preview of the unruly online battle brewing across the Atlantic, as those seeking to influence voters become more cunning about reaching people through Facebook, Instagram, Twitter, YouTube and WhatsApp.

She said that whenever journalists questioned Conservative Party representatives about the questionable tactics, they used the opportunity to criticize opponents in the Labour Party.

Lisa-Maria Neudert, a researcher at the Oxford Internet Institute who tracks social media use in the British election, said it was worrying that mainstream campaigns were so involved.

“It’s about winning at any price,” she said. “The difficulty is so much of this is legal. Much of it is just falling through the gaps of the law.”

The Conservative Party, which did not respond to requests for comment, bolstered its online operation by adding Sean Topham and Ben Guerin, political consultants in their 20s from New Zealand. Their digital skills helped fuel Scott Morrison’s surprise victory as prime minister of Australia last year.

They also gained attention for “boomer memes” — low-quality, scrappily produced ads that reiterate simple messages by pasting them onto images from popular shows like “Game of Thrones.”

Their approach is to find ways to attract attention to their clients, whether candidates or parties, by pushing emotional buttons that elicit a response online.

“We’re talking anger, excitement, pride, fear,” Mr. Guerin said at a conference in June. “Your content should be relating to one of these emotions for anyone to give a damn about it.”

He described the strategy as “How do you win the battle of the thumbs?”

Still, disinformation’s overall influence on voters is far from clear. Researchers have struggled to precisely measure how much people are swayed by what they see in their social media feeds.

In Wigan, a longtime Labour stronghold in northwestern England where the Conservatives have been trying to capitalize on strong pro-Brexit sentiments, newspapers and television remain a common way for many people to get information. But for others, like Greg Rimmer, a 26-year-old who works for the local government, everything comes from social media.

Pulling out his phone, he scrolled through a Twitter feed filled with political posts criticizing the Conservative Party’s health care plans. He tapped over to Facebook, where he saw another meme about the election.

“I hardly ever watch the news, but I’m on Facebook, Twitter, Instagram and YouTube all the time,” he said. “I try not to let it sway me, but if you see something constantly, you can’t help it.”

Many videos shared on Facebook and in WhatsApp groups around the country originate in a cramped office in the northern London neighborhood of Finsbury Park.

The group has about 15 people who produce videos, memes and other social media content, often using humor or outrage to grab attention. “People are so saturated, you need to grab their attention in the first three seconds,” said Mr. Charlaff, who said Momentum did not knowingly publish any false information.

Britain’s election is the first major campaign since Facebook said it would not fact-check political ads from candidates and political parties. Sam Jeffers, a co-founder of Who Targets Me, a group that tracks Facebook political advertising, said that since then, there had not been the flood of disinformation that many had feared.

Yet he said there were a lot of misleading online ads, some from new outside groups whose financial backers are not always clear to the public.

As of Dec. 5, no party or candidate in Britain had spent more than 750,000 pounds (about $1 million) on Facebook ads during the campaign, far below what candidates in the United States typically spend.

Yet Mr. Davey of the Institute for Strategic Dialogue, the group that tracks global disinformation, said posts spread among Facebook users were just as big a problem as political ads. The British election, he said, highlights the widening use of techniques to manipulate social media by candidates, parties, activist groups and individuals around the world.

With few rules around internet campaigns, Mr. Davey said, it is hard for voters to know what content is legitimate and where the material originates. There have been several recent examples where information originating from questionable sources online reached the mainstream.

In a TV interview on Monday, Mr. Johnson was caught in a gaffe, refusing to look at a picture of a sick 4-year old lying on a hospital floor because of a lack of beds. It was an implicit criticism of the Conservatives for having starved the health system of funding.

By Tuesday, an effort was underway online to discredit the child’s family, and a false statement claiming the episode was staged was widely shared on Facebook and Twitter — even though the hospital said the case was true and issued an official apology.

The document that Mr. Corbyn cited to support the argument that post-Brexit, the Conservative Party would weaken the National Health Service in a trade deal with the United States, was posted on the online forum Reddit. It purported to be a leaked copy of a secret trade document between Britain and the United States.

Last week, Reddit said the document had links to the Russian disinformation campaign, raising fresh questions about foreign interference in the campaign, though the document itself seemed to be accurate.

In another effort discovered by researchers, anti-Muslim messages were shared in WhatsApp groups and Twitter in an effort to sway Hindu voters in Britain to vote against Labour.

And after the stabbing near London Bridge last month, false information was circulated in Labour-supporting Facebook groups that the killing had been a “false flag” staged to support the Conservative Party.

Perhaps the strangest incident came when an online forum spread a false rumor that Jo Swinson, the leader of the Liberal Democrats party, enjoyed hunting squirrels.

First Draft, the group that investigates online misinformation, traced how the rumor had spread from a fake news clip doctored to look as if it had come from the Daily Mirror newspaper. As the rumor spread online, Ms. Swinson was asked in a radio interview whether she hunted squirrels, leading to newspaper headlines like “Jo Swinson Denies Firing Stones at Squirrels.”

All of this leads to one thing, said Ms. Sargent of First Draft: “It’s this gentle erosion of trust.”