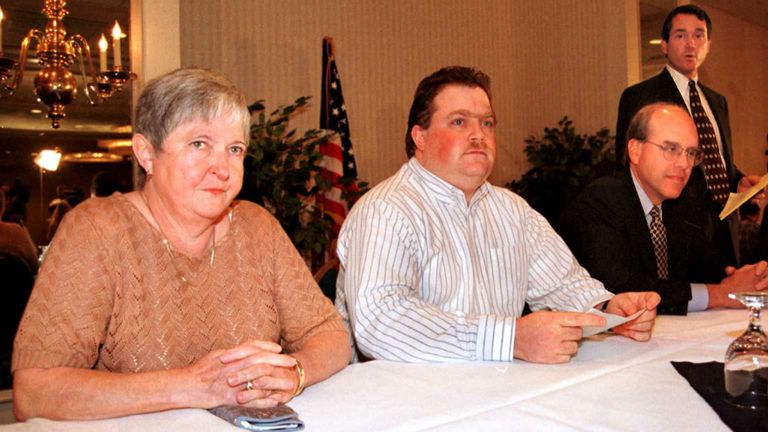 An upcoming film based on a real-life bomb attack has been accused of portraying a journalist in a "false and malicious" manner.

Richard Jewell, a movie directed by Clint Eastwood, focuses on the 1996 bombing at Centennial Olympic Park in Atlanta, Georgia.

Jewell, a security guard, discovered the device before it detonated and helped evacuate people from the park.

In the movie, Paul Walter Hauser plays Jewell, who was initially investigated as a suspect by the FBI.

The film's synopsis says that, despite never being charged, Jewell was "vilified by press and public alike" after initially being hailed a hero. Later, he was completely exonerated.

Warner Bros, the company distributing the film, says it "is a story of what happens when what is reported as fact obscures the truth".

But ahead of Richard Jewell's release in the US on Friday, the Atlanta Journal-Constitution newspaper (AJC) says it has sent a legal letter to demand a public acknowledgement - and a disclaimer - that states some of the events dramatised in the film were "imagined for dramatic purposes".

In a report on its website, the newspaper says it "takes strong exception" to elements of the film - particularly the portrayal of the late reporter Kathy Scruggs, who is played by Olivia Wilde.

According to the AJC article, Scruggs is "depicted as someone who relies on illicit liaisons with sources to gain information".

The article adds: "The AJC's reporter is reduced to a sex-trading object in the film. Such a portrayal makes it appear that the AJC sexually exploited its staff and/or that it facilitated or condoned offering sexual gratification to sources in exchange for stories.

"That is entirely false and malicious, and it is extremely defamatory and damaging."

The AJC had criticised the movie before sending the legal demand on Monday, with Eastwood and the film's stars defending themselves.

While promoting the film, Eastwood said the paper was "probably looking for ways to rationalise their activity. I don't know for sure".

The director added: "I think that I've just read a lot of material on Kathy Scruggs. I've read all the material I could find on her. And they all seem to corroborate the fact that she was somewhat on the wild side. And she's someone on the real wild side and she did, she did have interactions with police, law enforcement people in the Atlanta area."

Jon Hamm, who plays the lead FBI investigator in the film, said: "The film is not an indictment of the media, of anyone in particular. It's a story about how a man and his life were turned upside down by people who maybe cut some corners."

In an interview with Deadline, Wilde said she carried out "an extraordinary amount of research" on Scruggs.

"I spoke to her colleagues, her friends, I spoke to the authors of the recent book about the event, (The Suspect), I spoke to (screenwriter) Billy Ray, I spoke to (Vanity Fair reporter) Marie Brenner, I spoke to everybody I could to get a sense of who this woman was," she said.

The AJC says its letter from law firm Lavely & Singer has been sent to Eastwood, screenwriter Billy Ray, Warner Bros and other parties.

The AJC was first to reveal that the FBI considered Jewell a suspect following the bomb attack.

In the article published on its website on Monday, the newspaper says: "The AJC was among numerous entities sued after Jewell was cleared, and the only one that didn't settle. The litigation naming the AJC was dismissed in 2011, with the Court of Appeals concluding that the coverage was substantially true at the time of publication.

"The letter sent Monday notes the legal outcome and lists other objections, including the movie's depiction of the AJC's reporting practices.

"Far from acting recklessly, the AJC actually held that story for a day to develop additional independent corroboration of key facts prior to publication."

In summary, the article says that "the AJC acted responsibly and in accordance with appropriate journalistic standards".

Serial bomber Eric Robert Rudolph was sentenced to life without parole for the attack - which killed spectator Alice Hawthorne and injured more than 100 others - after pleading guilty in 2005.