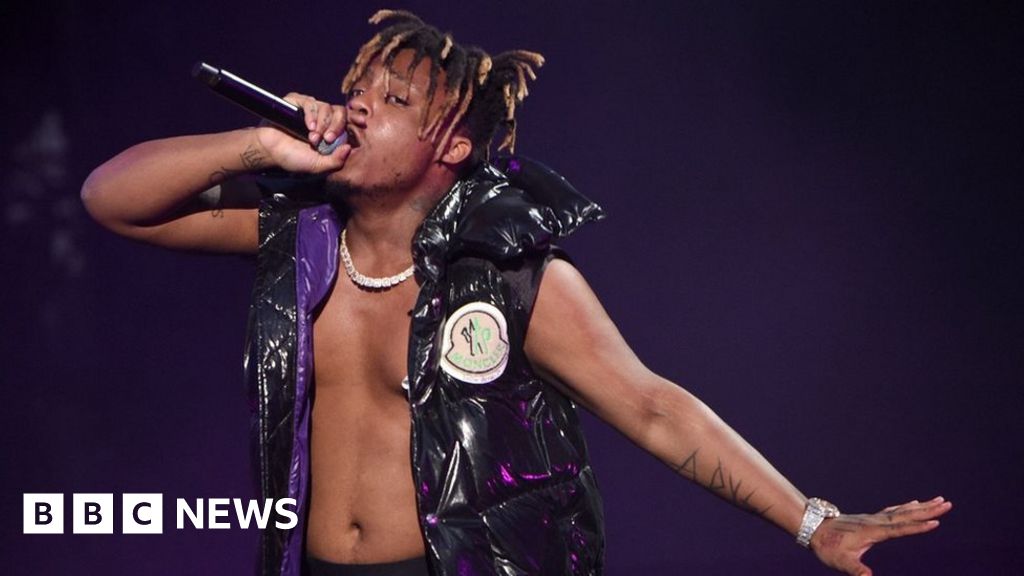 Police say they found guns and drugs on the private jet that carried rapper Juice Wrld to Chicago before he died on Sunday morning.

Law enforcement officials were waiting for the plane when it landed, having received information that banned substances might be onboard.

It was during a subsequent search of the aircraft that the rapper had a seizure that led to his death.

An autopsy on the 21-year-old has proved inconclusive.

The Cook County Medical Examiner's Office said on Monday that additional studies were needed before they could determine the cause of death.

Police in Chicago said they did not suspect foul play; but gave some additional details that shed light on the sudden death of one of hip-hop's brightest rising stars.

Two men identified by police as Juice Wrld's security guards have been charged with illegally possessing guns and ammunition.

Anthony Guglielmi, a Chicago police spokesman, said the star "began convulsing (and) going into a seizure" as authorities were searching two carts of luggage at about 2am on Sunday morning.

Federal agents quickly administered Narcan, a drug used to revive people thought to be overdosing on opioids, and the Chicago Fire Department was on the scene in under seven minutes, Guglielmi said.

Higgins woke up but was incoherent and, after being taken to hospital, was pronounced dead just after 3am.

The Chicago-born star had emerged from the Soundcloud rap scene, and was known for his sweet-voiced, melodic brand of hip-hop, with songs often freestyled in just a few takes.

He scored a major hit in the UK last year with Lucid Dreams, a hazy lament for an ex-lover that sampled Sting's Shape Of My Heart; and had also worked with the likes of Ellie Goulding, BTS, Lil Yachty and Halsey.

Tributes from the music world flooded in after news of his death broke on Sunday.

Drake wrote on his Instagram: "I would like to see all the younger talent live longer and I hate waking up hearing another story filled with blessings was cut short."

"This is ridiculous," wrote Chance the Rapper. "Millions of people, not just in Chicago but around the world are hurting because of this and don't know what to make of it. I'm sorry. Love you and God bless your soul."

Travis Scott, with whom Juice Wrld collaborated on Scott's album Astroworld, shared a photo of them together in the studio with Future and wrote: "You will live on forever."

Ellie Goulding also shared her condolences, calling the rapper a "sweet soul" and sharing a picture of the two together; while BTS shared a tweet that read: "Rest in peace Juice WRLD #RIPJUICEWRLD."

Fans have subsequently pointed out that Higgins "predicted" his death in a song called Legends.