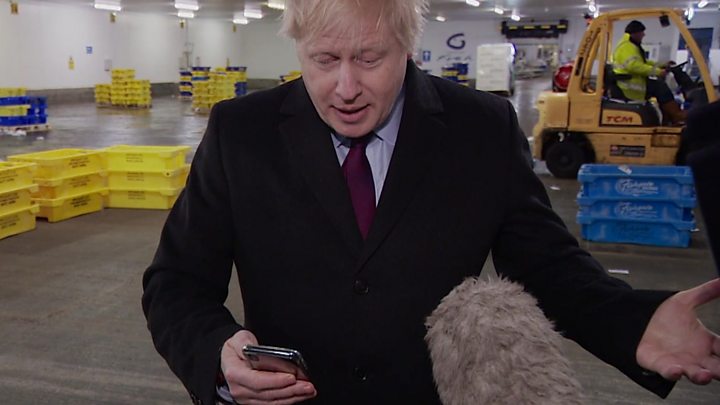 Labour claims NHS under-funding is putting patients at risk and the Tories are warning about a hung parliament, as the election enters its final stretch.

With two days to go, Labour is pledging a "relentless focus" on the health service if it wins power.

Prime Minister Boris Johnson will try to keep the focus on Brexit and the "danger" of another hung Parliament.

In a speech later, he will pledge that the Tories would "smash through the gridlock" if given a majority.

The Conservatives are also attacking Labour over the costs of delivering and running new government agencies promised in the party's manifesto.

It comes after Mr Johnson faced criticism on Monday over his response to an image of a sick four-year-old boy who had to sleep on the floor of a hospital.

In other election developments:

Labour says reports produced by NHS trusts in England this month show a health service "in crisis and on the brink".

The party says an analysis it has conducted of more than 120 NHS trust board papers identified hundreds of risks to patient safety classed as "catastrophic" or "extreme".

The majority were linked to spending, staff shortages or failures of privatisation, the party said.

It promised that a Labour government would conduct an immediate audit of the risks revealed.

The BBC's Reality Check team said the quotes from the NHS boards were genuine but did not give the nationwide picture, which was more mixed.

Labour said the backlog of maintenance in the NHS is £6.5bn, of which £1.1bn is for "high-risk" repairs.

Its analysis also found there were 15,844 patient incidents "directly" linked to NHS buildings and facilities, as well as 4,810 clinical incidents caused by building and infrastructure failure.

Shadow health secretary Jonathan Ashworth said: "These shocking reports reveal an NHS in crisis and on the brink.

"We pledge that within the first 100 days of a Labour government we will get on top of this to ensure the extra funding we've promised is prioritised to keep patients and staff safe."

For the Conservatives, Health Secretary Matt Hancock said the party was embarking on the "largest" hospital building programmes in UK history, although there is controversy about its pledge to build 40 new hospitals.

Meanwhile, Mr Johnson has continued to face criticism over his response to a photograph that showed a sick four-year-old boy on the floor of Leeds General Infirmary.

An ITV reporter tried to show Mr Johnson the picture on his phone, but he initially refused to look, before taking the device and putting it in his pocket.

He later looked, returned the phone and apologised to the family.

Justice Secretary Robert Buckland told BBC Radio 4's Today programme that the "family want their privacy to be maintained" and for their son Jack "not to be used as a political football".

"This is an election that should be fought on the high ground, rather than an argument of who said what to whom," the Conservative said.

He added that the prime minister expressed "sorrow and regret" for what he saw and apologised to the family, and the health secretary also went to Leeds to apologise.

When challenged on briefings from the Conservative Party that claimed an aide of Mr Hancock was punched by a Labour activist during the visit, which was disproved by video footage, Mr Buckland said he did not know "who briefed what to whom".

"What I saw was a very confusing scene of public disorder," he said, adding that he had seen the footage.

Labour's shadow health secretary Mr Ashworth told BBC Radio 4's Today programme that his party was not using Jack's case as a political football, saying: "My heart goes out to Jack and his family."

"Unfortunately across the country these are not one-off events," he said, adding that there are elderly people "wasting away" on trolleys in hospital corridors because there are not enough beds.

Elsewhere, Mr Johnson will use a speech later to warn there is a "clear and present" danger of another hung parliament if voters do not turn out to support the Conservatives on Thursday.

On a campaign visit to Staffordshire, he will tell supporters there are "well-financed" efforts to prevent a Tory majority through tactical voting, with just 12 gains by opposition parties enough to make Mr Corbyn prime minister.

"On the other hand, the Conservatives need only nine more seats for a majority.

"We could finally get Brexit done, end the uncertainty and move on," he will say.