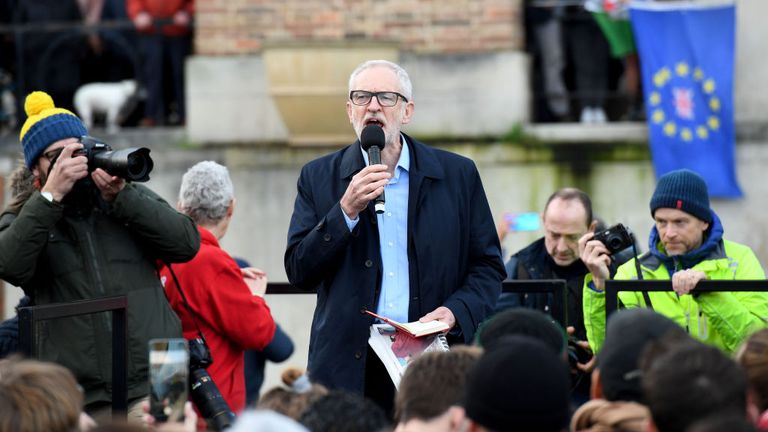 With just two days to go until the election, Boris Johnson and Jeremy Corbyn have tried to sway voters by starring in pop culture-inspired videos.

Mr Johnson posted a video on Monday evening with him emulating the iconic Love Actually scene in which Andrew Lincoln silently holds up placards to Keira Knightley as he pretends to be a group of carol singers.

At the same time, Mr Corbyn posted a video entitled "Mean Tweets with Jeremy Corbyn", in which the Labour leader read out critical tweets about himself, in the same style as US late-night chat host Jimmy Kimmel.

The prime minister's three minute "Brexit, actually" clip features him showing up at the door of an apathetic voter and sliently showing her a series of Brexit-themed messages after pretending to be a group of carol singers.

Two of the placards read: "With any luck, by next year we'll have Brexit done (if parliament doesn't block it again)."

Others said: "Your vote has never been more important, the other guy could win, so you have a choice to make between a working majority or another gridlocked hung parliament."

"Enough, let's get this done," Mr Johnson said at the end of the spoof clip, directly referencing the original clip once more while walking away from the woman's house.

Less than half an hour after the Conservatives' campaign video had been launched, Dr Allin-Khan tweeted to say the prime minister had copied her spoof.

She wrote: "I won't be retweeting it - but Boris Johnson has copied my #ElectionActually video. Tanks. On. The. Lawn."

In Mr Corbyn's spoof video, the Labour leader sat by a fireplace and read out critical tweets about himself and his campaign.

Mr Corbyn replied: "What is a commie hat? I wear a cap! It's a bit like when I was told I was riding a Maoist bicycle. It's a bicycle!"

After addressing Labour manifesto promises on broadband and tuition fees, he read out a tweet about being found sexy.

"Oh this is bad," Mr Corbyn said, later telling viewers there was a magic money tree "in the Cayman Islands".

The Labour leader ended the video with a high-five to someone off-camera and saying he would be the next prime minister.