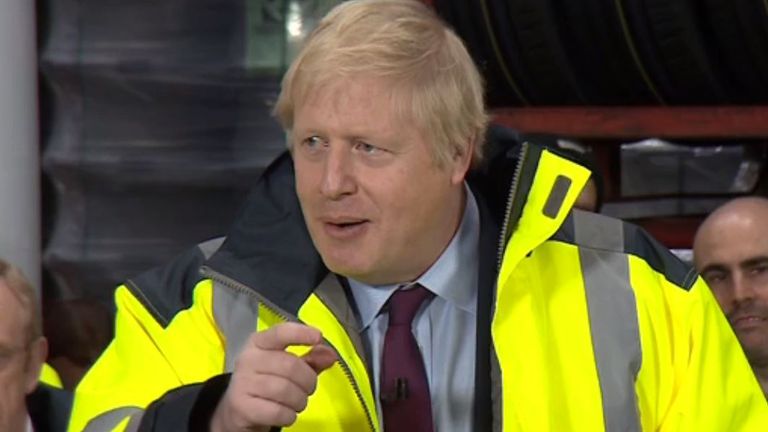 Boris Johnson has been criticised for taking the phone of a journalist who tried to show him a picture of a boy sleeping on a hospital floor.

The prime minister was accused of not caring about Jack Williment-Barr, a four-year-old with suspected pneumonia taken to Leeds General Infirmary.

He was invited multiple times to look at a photo of the boy waiting for treatment lying on a pile of coats in an interview with ITV News - but instead pocketed the phone.

Mr Johnson later took the phone from his pocket, looked at the screen and said: "It's a terrible, terrible photo, and I apologise obviously to the family and all those who have terrible experiences in the NHS".

Challenged on the interaction later, the prime minister did not respond to questions about the photo or taking the journalist’s phone but talked about plans to “transform our NHS”.

Pressed on whether his reaction showed he didn’t care about the boy, the Conservative leader insisted: “I've answered that question.”

He added: "We are not only investing in children's services in Leeds but we're also rebuilding the whole Leeds Infirmary from top to bottom.

"And we can do that because we're now putting the biggest ever investment into the NHS.

"What I don't want to see is a fantastic programme that is going to unite and level up our country being blocked again."

Labour leader Jeremy Corbyn held a picture of Jack up at a rally in Bristol on Monday afternoon.

“The Tories have had nine years to fund our NHS properly,” he said.

"It's time to bring their regime to an end and elect a Labour government that's determined to fund our NHS properly."

Shadow health secretary Jon Ashworth added sick toddlers like Jack Williment-Barr “deserve so much better”, while shadow communities secretary Andrew Gwynne claimed the PM “just doesn’t give a s*** about anybody but himself”.

Leader of the Liberal Democrats, Jo Swinson, tweeted: “He won’t look at the photo because he simply does not care.

“If he gets a majority on Thursday, he’ll spend five years not caring about you either.”