Amazon will open a new office in New York, less than a year after dropping plans for HQ2 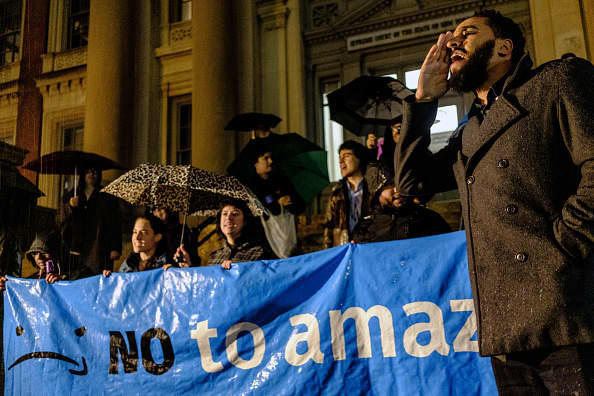 Amazon will open a new office in New York, less than a year after dropping plans for HQ2

The deal comes less than a year since Amazon announced on Valentine's Day it would halt plans to build its new headquarters in the Long Island City neighborhood of Queens, New York. Amazon and lawmakers who brokered the deal behind closed doors faced pushback from local activists and city council leaders who criticized the nearly $3 billion in performance-based incentives offered to the company in exchange for bringing 25,000 jobs to the area.

To those who opposed the exchange of tax breaks for jobs, the new Hudson Yards space is something of a victory.

"Won't you look at that: Amazon is coming to NYC anyway - *without* requiring the public to finance shady deals, helipad handouts for Jeff Bezos, & corporate giveaways," Rep. Alexandria Ocasio-Cortez, a New York Democrat who represents the region where Amazon planned to build its HQ2, tweeted Friday following the Journal's report.

But the new lease will bring just a fraction of the jobs Amazon promised as part of the HQ2 deal. The company will have over 1,500 employees at the new site, according to the Journal. Amazon had made clear it would continue to grow in New York even after it pulled out of its HQ2 project there. The new Amazon jobs will also be located in Manhattan, not the developing neighborhood of Long Island City in Queens.

An Amazon spokesperson told CNBC that the new office space will open in 2021 and house employees from its consumer and advertising teams. The spokesperson also said the office is part of the company's previously announced plan to add jobs "organically" in many U.S. cities, including New York City.

Even so, in a separate tweet, Ocasio-Cortez argued the 25,000 job Amazon promised "was a 10-20 year fantasy" rather than a firm commitment.

Shortly before Amazon formally ended its HQ2 plans in New York, Governor Andrew Cuomo, a Democrat, pleaded with the public and described what he saw as a huge loss if Amazon pulled out of the deal.

"There is no business that brings 25,000 jobs anymore. They don't exist. I spend days trying to bring a business that has 100 jobs or 200 jobs," he said. "Every project has local opposition. ... People just oppose change."

Amazon is not the only tech giant planning to grow in New York's Hudson Yards. Facebook signed a lease for more than 1.5 million square feet of office space, the development announced in November. The company is looking to expand further in Manhattan, according to a separate Journal report on Friday, which said Facebook is in talks to lease about 700,000 square feet of space in Midtown.

Facebook did not immediately respond to a request for comment, but a spokesperson told the Journal, "It's hard to predict future growth, but we believe New York is a vibrant market with a tremendous pool of talent."

Amazon still plans to build its second headquarters in Northern Virginia, which it chose jointly with New York following a nationwide scouting effort.

WATCH: How Virginia won Amazon's HQ2, according to a top exec