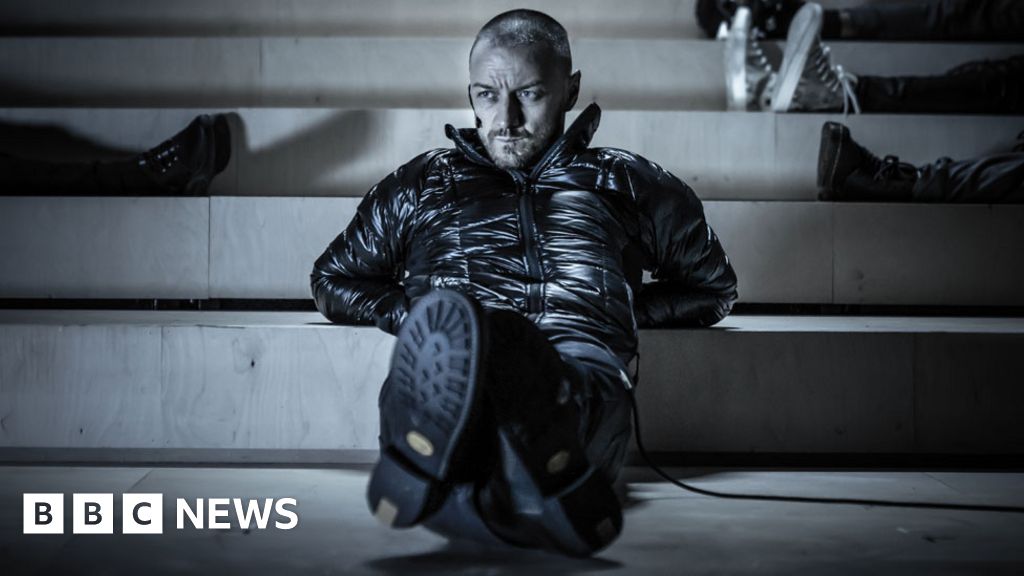 Generations of actors have donned prosthetic proboscises to play Cyrano de Bergerac. James McAvoy tells BBC News why his portrayal does without one.

The first thing you notice when James McAvoy takes to the stage in the latest London staging of Cyrano de Bergerac is that his nose is distinctly his own.

This Cyrano, though, swims against the tide. Not only does Jamie Lloyd's production use contemporary modern dress, but it also leaves the legendary hooter to the viewer's imagination.

"Rostand wrote a play about the power of words and the power of the imagination," explains McAvoy after Friday's press night performance.

"[So we thought], let's really test how powerful his words and imagination are and see if they can truly engage the audience.

"If we're good enough, focused enough and disciplined enough as performers, then the audience will see a nose."

Props, costumes and other paraphernalia are also dispensed with in Lloyd's pared-down staging - the first of three productions his company is presenting at London's Playhouse Theatre.

In another departure from the florid norm, its characters use microphones to converse in the style of a poetry slam or rap battle.

The result, according to the Telegraph's Dominic Cavendish, is "a super-smart, stripped back Cyrano that turns the play on its head".

"There's so much artifice, so many bells and whistles, so many trappings that come with certain shows and Cyrano is definitely one of them," McAvoy continues.

"There's the big hat, the big feather, there are swashbuckling musketeers - all that kind of stuff.

"We literally just went back to the words and let them do all the heavy lifting."

Cavendish applauds that decision in his five-star review, likening Lloyd's production to "a performance poetry gig" full of "streetwise panache".

Clive Lewis is equally effusive in The Times, praising adaptor Martin Crimp for "sinuous hip-hop verse that is grandiloquent and swaggering when it needs to be but is also witty and tender".

First staged in the French capital in 1897, Cyrano was originally played to great acclaim by the actor Constant Coquelin.

Many other performers have followed in his footsteps, among them Sir Antony Sher, Robert Lindsay, Kevin Kline and Peter Dinklage.

Jose Ferrer won an Oscar for playing Cyrano in a 1950 film, while Gerard Depardieu received an Oscar nomination for his 1990 portrayal.

Martin, meanwhile, enjoyed such success playing fire chief CD Bales in 1987's Roxanne, that he gets a shout-out in Crimp's adaptation.

"I guess so many people have come back to it because it is such an opportunity to throw yourself at a piece of material that could kill you," says X-Men star McAvoy.

"That's the best stuff to do, where you are constantly tested and forced to find new things."

McAvoy and Lloyd are frequent collaborators, having previously worked together on Macbeth and The Ruling Class at London's Trafalgar Studios.

Lloyd's other work includes this summer's Evita revival at the Open Air Theatre in Regent's Park and the Pinter at the Pinter season at the Harold Pinter theatre.

Cyrano de Bergerac continues at the Playhouse Theatre in London until 29 February.