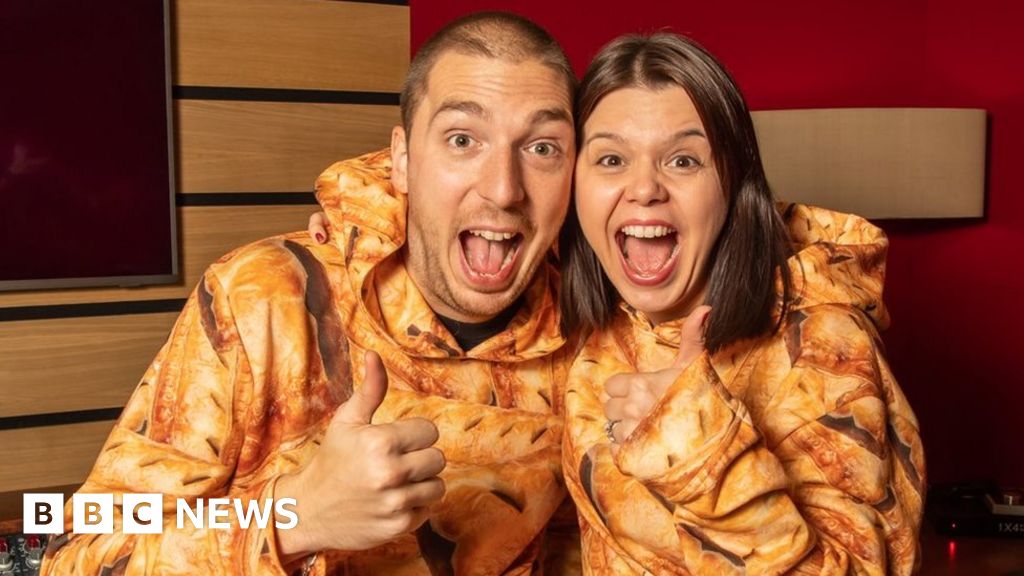 YouTube star LadBaby, who scored last year's Christmas number one with an ode to sausage rolls, is mounting a second assault on the charts.

The "dad blogger" has rewritten Joan Jett's I Love Rock & Roll for this year's attempt; once again extolling the virtues of pork-stuffed pastry.

I Love Sausage Rolls was recorded at Abbey Road, but LadBaby maintains he's "no more professional" than before.

"Brace yourself, my singing voice is back," he told the BBC.

The single won't be released until Friday, 13 December - but it's crammed full of meaty puns, leading to the inevitable chorus: "I love sausage rolls / So put another one in the oven, baby".

Ladbaby, whose real name is Mark Hoyle, said the parody was written in "about five hours" after he and his wife Roxanne chose it from a playlist of the UK's favourite karaoke songs.

"We basically went down the Top 50 karaoke songs in the UK - because we wanted a song, like last year, where everyone knows the words and you can sing along to it and the kids can join in and have fun."

Last year, the YouTube star captured the public's imagination with the comedy hit We Built This City On Sausage Rolls. The song went straight to number one, beating the likes of Ava Max and Ariana Grande, as well as seasonal favourites by Mariah Carey and The Pogues.

All of the proceeds went to The Trussell Trust, a foodbank charity, funding about 70,000 emergency food packages over the festive period.

Hoyle said he had intended to end the story there, until he saw the charity's work first-hand.

"We basically spent a few days meeting the volunteers and understanding how the food banks work," he said, "and while we were there, the doorbell rang once every two or three minutes with more people coming in.

"Once we saw how far the money goes, we thought, 'Do you know what? If we can get anywhere near raising that sort of money again, then why not?'"

According to The Trussell Trust's own research, more than 823,000 parcels were provided by food banks in the UK between April and September this year - an increase of 23% increase from the same period as last year.

"They said the Christmas period is the worst - that's when they have the most people in," Hoyle added. "So for us, it was a no-brainer to try to help those guys again."

If I Love Sausage Rolls gets to number one, LadBaby will be only the third act in UK chart history to have consecutive Christmas chart-toppers.

"There's a chance we can be in there with the Beatles and the Spice Girls," says Hoyle. "There's never been a novelty act with back-to-back Christmas number ones, so we could make some history."

However, the record faces stiff competition this year, with the likes of Lewis Capaldi and Taylor Swift taking a swing at the festive chart.

Australian artist Tones & I could also cling on to the top spot - she's currently enjoying a 10th week at number one with the quirky pop single Dance Monkey; while fans of Wham! are trying to propel Last Christmas to number one (for the first time) in honour of the song's 35th anniversary.

LadBaby isn't even the only charity single in the running: Broadchurch actor Shaun Dooley has teamed up with the Grimethorpe Colliery Band to cover Taylor Swift's Never Grow Up in aid of Children In Need; while six-year-old Lyra Cole has recorded a version of When A Child is Born for Brain Tumour Research, which helped her through emergency surgery as a baby.

"It feels like there's more competition this year," agrees Hoyle, "so the chances of doing it again seem very slim."

But if they reach their goal, he promises to go one better next year.

"We were joking the other day, 'How do you get bigger than Abbey Road?'" he says. "And I think we'd have to fly to LA and do an album with Dr Dre."