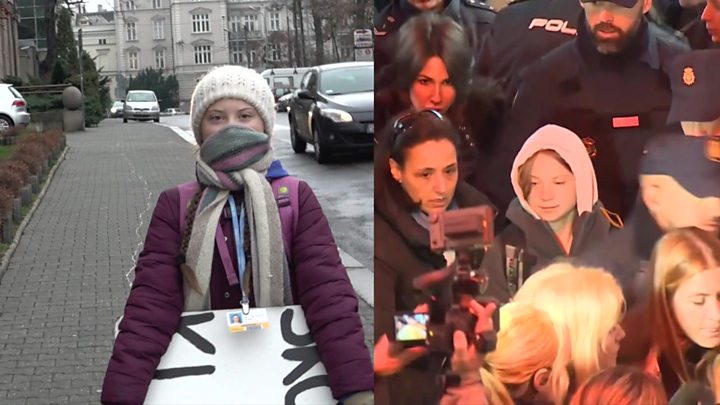 UN negotiators meeting in Madrid have been accused of "playing politics" while the climate crisis grows.

The talks - now in their final week - are bogged down in technical details as key countries seek to delay efforts to increase their pledges, observers say.

Ministers are due to arrive in the Spanish capital this week to try to secure an ambitious outcome.

US presidential hopeful Michael Bloomberg is due to attend, while Greta Thunberg will also address the meeting.

Up to half a million people took part in a march in Madrid in support of rapid climate action, but according to observers, negotiators haven't got the message.

"The problem is while hundreds of thousands of people are marching outside in Madrid, and school children are striking, countries are playing politics with the negotiations," said Mohammed Adow, director of Power Shift Africa, a climate and energy think tank based in Nairobi, who's an observer at these talks,

"We need ministers to arrive this week and make some real progress."

Inside the convention centre, the central question of increasing country pledges to cut their carbon has been pushed aside as negotiators resort to protecting national interests.

Back in 2015, everyone signed up to the Paris agreement and put new plans on the table that are due to run from 2020.

However the richer countries were supposed to undertake specific carbon cutting actions in the years between 2015 and 2020, which many haven't yet achieved.

Here in Madrid a group of countries including China, India and Saudi Arabia are pushing for these pre-2020 commitments be adhered to - even if it means achieving them post-2020.

Observers believe this is partly a negotiating tactic designed to put pressure on richer nations in any discussions about improving pledges in the period after 2020.

There is frustration that countries are focussing on trying to get advantages in the talks, instead of working together to increase ambition.

"The Paris agreement is clear: all countries agreed to deliver new climate targets by 2020, and as the recent UNEP emissions gap report made clear, the onus is on the top 10 polluters to deliver," said Laurence Tubiana, one of the key architects of the Paris agreement, now with the European Climate Foundation.

"I know leaders in Brussels, Delhi, Beijing, Tokyo and Ottawa care about global action, but we need them to deliver this week. We need their leadership to deliver on their Paris commitments."

As well as the pre-2020 question, the talks are stuck on two tricky, technical issues - one about the question of loss and damage, the other about carbon markets.

Article 6 of the Paris climate agreement deals with the trading of emissions reductions credits that might arise from a country beating its own pledges or from a public or private initiative that cut emissions, such as a renewable energy plant or the restoration of a forest.

Here in Madrid, as last year in Katowice, countries are struggling to agree the rules of how these markets would work.

A number of countries including Brazil want to carry over credits that were created under previous versions of this scheme.

The worry is that many of these historical credits are not real reductions.

If they are used by countries to meet part or all of their pledges they simply dilute real efforts to cut carbon.

The question of loss and damage sees developing countries looking for a new facility in the UN talks that would deal with the impacts of events like sea level rise or major storms that have a climate component.

They argue that the poorest are the ones feeling the impacts of a climate they didn't create.

Rich countries have long resisted the idea feeling they will be on the hook for billions of dollars for centuries to come.

Up to now these discussions have been led by civil servants, but the arrival of ministers will likely clarify if both can be resolved by political horse trading.

It's possible that a compromise could be arrived at that would see both issues resolved here. Or not!

While the interventions of Michael Bloomberg and Great Thunberg will likely gain headlines, there is still uncertainty over whether a final decision can be taken here that will be ambitious and set out a clear timeline for countries to get their pledges on the table ahead of COP26 in Glasgow in November 2020.

There is hope that a large number of countries will sign up to long term net-zero emissions targets, and if that happens it will be significant progress.

But many eyes here will be closely watching Brussels this week where the new EU commission is due to present a European Green Deal.

"What happens in Brussels will resonate in Madrid," said David Waskow from the World Resources Institute.