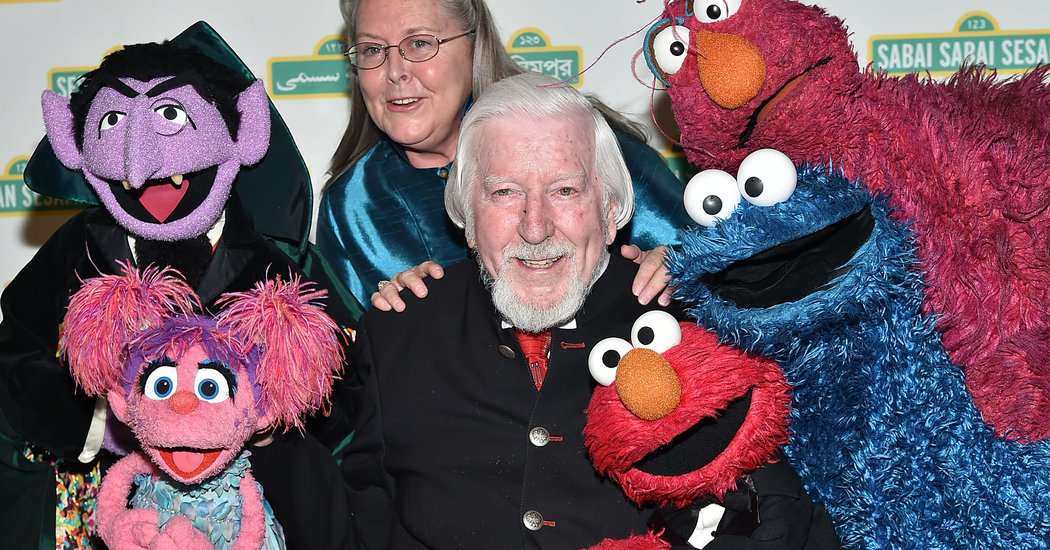 Sometimes he stood 8 feet 2 inches tall. Sometimes he lived in a garbage can. He often cited numbers and letters of the alphabet, and for nearly a half century on “Sesame Street” he was Big Bird and Oscar the Grouch, opening magic doors for children on the secrets of growing up and the gentle arts of friendship.

His name was Caroll Spinney — not that many people would know it — and he was the comfortably anonymous whole-body puppeteer who, since the 1969 inception of the public television show that has nurtured untold millions of children, had portrayed the sweet-natured, canary-yellow giant bird and the misanthropic, furry-green bellyacher in the trash can outside 123 Sesame Street.

Mr. Spinney, who also performed his characters in live concerts around the world and at the White House many times and was featured in films, documentaries and record albums, died on Sunday at his home in Woodstock, Conn., at the age of 85 after a long illness. The cause was not immediately disclosed. He death was announced by the Sesame Workshop.

For generations of preschoolers in America and scores of countries where the program is broadcast, Big Bird and Oscar were vivid playmates and subtle tutors in a Jim Henson Muppet menagerie that included Kermit the Frog, Bert and Ernie and the voracious Cookie Monster. The dialogue is scripted, but it was up to puppeteer-actors like Mr. Spinney to provide the voices and personalities.

Joining “Sesame Street” for its first season, Mr. Spinney, who had loved puppeteering since childhood, had problems at first adjusting to the Big Bird puppet suit created by Kermit Love. Mr. Spinney was 5 feet 10 and had to maneuver the giant from inside with hands, wires and a TV monitor strapped to his chest to guide him around studio sets.

But, raising his voice to a childlike pitch, Mr. Spinney easily picked up the talk of a perennial 6-year-old canary. He ascribed it to a lifelong ability to think like a child.

“I think most people completely forget what it was like being a kid by the time they grow up,” he told The New York Times in 1982, after 13 years and global success in his roles. “But I never got over it. It was almost a problem for me, in fact, trying to grow up enough, even when I went into the Air Force.”

His Big Bird had a childlike innocence, sometimes goofy, sometimes subdued, outgoing or shy, like most children a creature of habit and mood. His themes were simple: that it was good to speak up, O.K. to make a mistake, all right to be sad sometimes. At Jim Henson’s memorial service in 1990 at the Cathedral of St. John the Divine in New York, Big Bird sang a heart-rending farewell, “It’s Not Easy Being Green.”

As for Oscar the Grouch, Mr. Henson had wanted to model the gruff character on a “magnificently rude” restaurant waiter. But Mr. Spinney found another inspiration: the belligerent New York cabdriver he encountered on the way to his first day on the show. “Where to, Mac?” the cabby demanded, and without prompting launched into a tirade against the city’s liberal mayor, John V. Lindsay.

It was perfect — a consummate kvetch, peeved with everything and everybody (except small children). Oscar, who rarely left his trash can, hoarded junk, kept a pet orange worm called Slimey, attended annual “grouch conventions in Syracuse, New York,” despised “Pox News” and had a girlfriend named Grundgetta, Grundgie for short. His favorite dessert was a spinach-sardine-chocolate fudge sundae.

In a 2009 interview with Anderson Cooper on CNN for the 40th anniversary of “Sesame Street,” Oscar said he would still be orange — his original color — if he ever bothered to bathe his shaggy green moss.

When Big Bird and Oscar occasionally performed together — bird singing ABCs, grouch fulminating — Mr. Spinney operated one puppet while an understudy handled the other, using a vocal recording by Mr. Spinney. His dramatic range was wide. “I’ve gone from blubbering tears to wild happiness,” he told The Times in 1988. “It’s very satisfying.”

Mr. Spinney, who at times also played Bruno the Trash Man, Granny Bird and Elmo, took his characters to studios and stages across Europe, the Americas and Asia. “We traveled the world doing shows for kids, sometimes with Big Bird conducting orchestras,” he recalled.

In 1973, a year after President Richard M. Nixon’s diplomatic breakthrough with Communist China, Mr. Spinney flew to Beijing for a performance. Big Bird had his own seat on the plane. “They gave us a half-price ticket because he was only 6 years old,” Mr. Spinney said.

Big Bird appeared in “The Muppet Movie” (1979) and “The Muppets Take Manhattan” (1984), and in 1985 starred in “Sesame Street Presents: Follow That Bird,” in which a meddlesome social worker sends him to live with “his own kind,” a family of dodos in “darkest Illinois.” He runs away, and has a cross-country adventure.

Mr. Spinney, whose home in Woodstock, Conn., had a roller-skating rink and a secret passageway for children to spy down on grown-ups in the dining room, spoke softly and had a gentle face framed by long gray hair and a neat goatee. While he spoke at colleges and made public appearances, he could walk down a crowded sidewalk anywhere without being recognized.

“I’ve gotten used to the fact that Big Bird’s super famous and I’m a nobody,” he told Yankee magazine in 2010. “I made my peace with it. I’m glad I’m not recognizable.”

As the physical requirements of performing his characters became difficult for him, in particular a problem with balance, Mr. Spinney stopped doing the puppeteering for Big Bird in 2015, and began providing only the voices for him and Oscar. Matt Vogel, who had been Mr. Spinney’s apprentice as Big Bird since 1996, succeeded him in that role.

With the impending 50th anniversary of “Sesame Street” in October 2018, Mr. Spinney left the show after his own remarkable half-century run as the embodiment of two of the most beloved characters on television and one of the last surviving staff members who had been with the show from its beginning.

“I always thought, ‘How fortunate for me that I got to play the two best Muppets,’” Mr. Spinney said in a retirement interview with The Times. “Playing Big Bird is one of the most joyous things of my life.”

Caroll Edwin Spinney was born in Waltham, Mass., on Dec. 26, 1933, one of three sons of Chester and Margaret Spinney. He grew up in Acton, near Boston, a shy, lonely artistic child. Unlike his disapproving father, his mother encouraged his interest in drawing, painting and puppetry, even building him a puppet stage set to perform for neighborhood children. At 12, he had 70 puppets, many made by his mother.

He graduated from Acton-Boxborough Regional High School and attended the Art Institute of Boston, but dropped out to join the Air Force. Serving in Las Vegas, he had his first professional puppet show in 1955, playing “Rascal Rabbit” on television. After being discharged, he returned to Boston, where for a decade he played clown and puppet characters on a television show, “Bozo’s Big Top.”

He encountered Mr. Henson at a puppeteers festival in Salt Lake City in 1969, and a few months later joined “Sesame Street.”

Mr. Spinney and his first wife, Janice, had three children, Jessica, Melissa and Ben, and were divorced in 1971. In 1979, he married Debra Jean Gilroy, who was working for the Children’s Television Workshop when they met in 1972. A list of his survivors was not immediately available.

His honors included six Daytime Emmys, two Grammys, a Library of Congress Living Legend Award in 2000 and a Lifetime Achievement Award of the National Academy of Television Arts and Sciences in 2006.

Mr. Spinney’s Connecticut home, a Bavarian-style chalet, held a trove of mementos, including a letter from then President-elect Barack Obama, and a wall of pictures taken with television luminaries like Sid Caesar, Bob Hope and Jerry Seinfeld.

He published a memoir, “The Wisdom of Big Bird (and the Dark Genius of Oscar the Grouch): Lessons From a Life in Feathers” (2003, with J. Milligan), and was the subject of a 2014 documentary, “I Am Big Bird: The Caroll Spinney Story,” by Dave LaMattina and Chad N. Walker.

In the documentary, Michael Davis, who wrote “Street Gang: The Complete History of Sesame Street,” likened Mr. Spinney’s talent to an evergreen childhood. “There’s something about Caroll,” he said. “Not many people have it. He can go back in time almost, and re-create the feelings and thoughts and the questions and the fears of a youngster.”