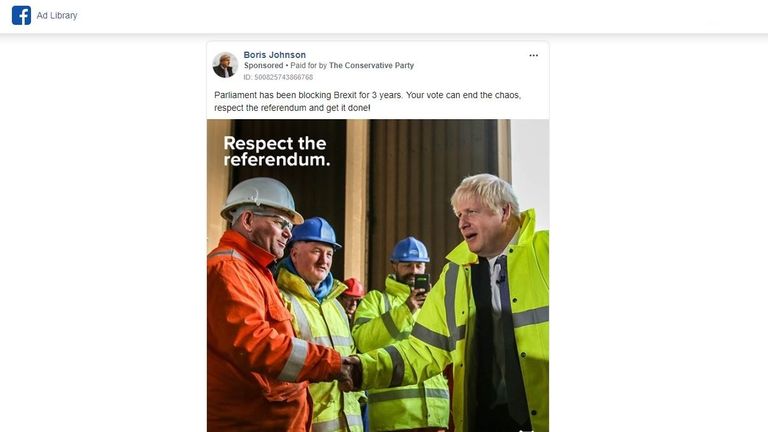 The Conservative Party has quadrupled its spending on Facebook advertisements as the election campaign enters its final days.

Its spending surged from £5,577 on 3 December to £22,491 the following day, the most recent dates for which spending data is available as Facebook reports daily spending on a three-day delay.

Although the spending data isn't yet available, the party published a large number of advertisements on 4 December, meaning the figure is likely to grow even higher in the coming days.

An image posted from Boris Johnson's account, featuring the Tory leader in a high-visibility jacket with other men around him in similar jackets wearing hard helmets, is among those being pushed by the party.

The party's spending is still far below that of the Labour Party, which has invested heavily on Facebook advertising throughout the campaign, spending around £726,000 between 6 November and 3 December.

Labour's advertising has varied during that period and been successful in terms of reach, with two ads from London mayor Sadiq Khan's account getting more than a million impressions each - the highest threshold measured by Facebook.

The top five advertisements in terms of impressions throughout the whole campaign have been run by Labour.

Two-thirds of the money which Labour has spent on Facebook have been on advertisements run from the party's official Facebook page.

The other third - although paid for from the main party's coffers - has been spent on advertising run through posts from the pages of senior party figures, including Jeremy Corbyn, Sadiq Khan and John McDonnell as well as regional groups including Scottish Labour and West Midlands Labour.

The Tories instead are primarily funding national campaigns through the Conservative official page, and that for Boris Johnson.

Curiously, the Liberal Democrats - who are the second most prolific Facebook spenders, and overall have the most daily advertisements running - have mainly pushed posts from their official party page. They have not funded anything at all from the page of their leader, Jo Swinson.

The Brexit Party has also not invested in any advertisements from the page of its leader, Nigel Farage.

Labour's tactic of fewer ads but with more investment has been carried out on Snapchat as well, where two ads costing $15,000 (£11,400) encouraged users to register to vote received more impressions than any other party's efforts.

The Brexit Party has been the largest spender on Google since 3 November, with more than £126,000 between 3 November to 24 November, almost all going on search advertisements.

The Conservative Party (£99,000) and Labour (£94,000) have spent similar amounts with Google, according to the web giant's transparency data.

However, Sky News has discovered incidents in which Google has broken its own rules in failing to declare advertisements as being sponsored by Labour and the Tories when they were.