No gaffes or game-changers as leaders 'draw' final debate 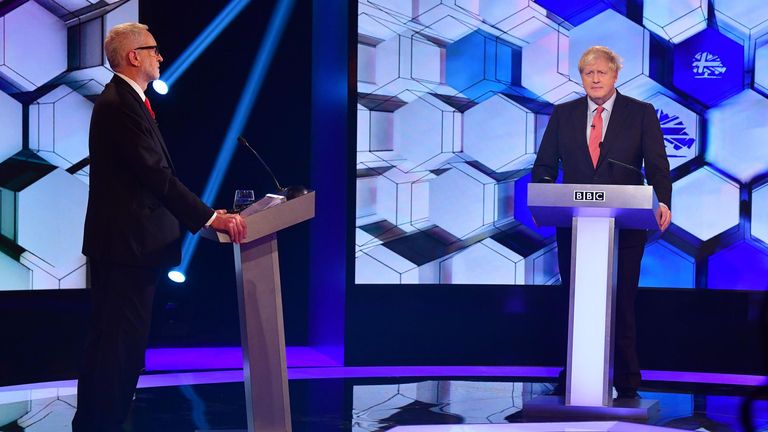 No gaffes or game-changers as leaders 'draw' final debate

You would be hard pressed to find two politicians more diametrically opposed than Boris Johnson and Theresa May.

But the current prime minister channelled his immediate predecessor in the last TV debate of this election campaign.

Two years ago, it was "strong and stable". This time around, it's "get Brexit done".

With less than a week to go until polling day, the election is Mr Johnson's to lose and he will have wanted to avoid any slip-ups in the debate.

On this front, he can go away happy. There were no catastrophic gaffes or campaign-altering calamities.

But he did not emerge totally unscathed.

Much like when the audience laughed at him during the first debate when he talked about trust in politics, the question about what should happen to lying politicians felt like an awkward moment.

There was an initial ripple of knowing laughter, and the prime minister appeared almost sheepish as he said they should be "made to go on their knees" in the House of Commons "scourging themselves with their offending documents".

Jeremy Corbyn grew more assured as the debate wore on - and put in a steady performance.

He turned criticism of Labour's antisemitism row from Mr Johnson back on the PM.

Responding to Mr Johnson's allegation that he had failed "to take a stand" on the issue, Mr Corbyn won applause when he said: "A failure of leadership is when you use racist remarks to describe people in different countries or in our society."

And on Brexit, he challenged the PM on what exactly his Brexit deal will entail for Northern Ireland, calling for "a bit of openness from the government".

But it was not a game-changing effort from the Labour leader. Much like the first debate of the campaign, it felt like a draw.

A mostly forgettable contest, it was hard to pinpoint a standout moment that will live long in the memory. But that is just fine for Team Johnson.