'I was addicted to exercise' 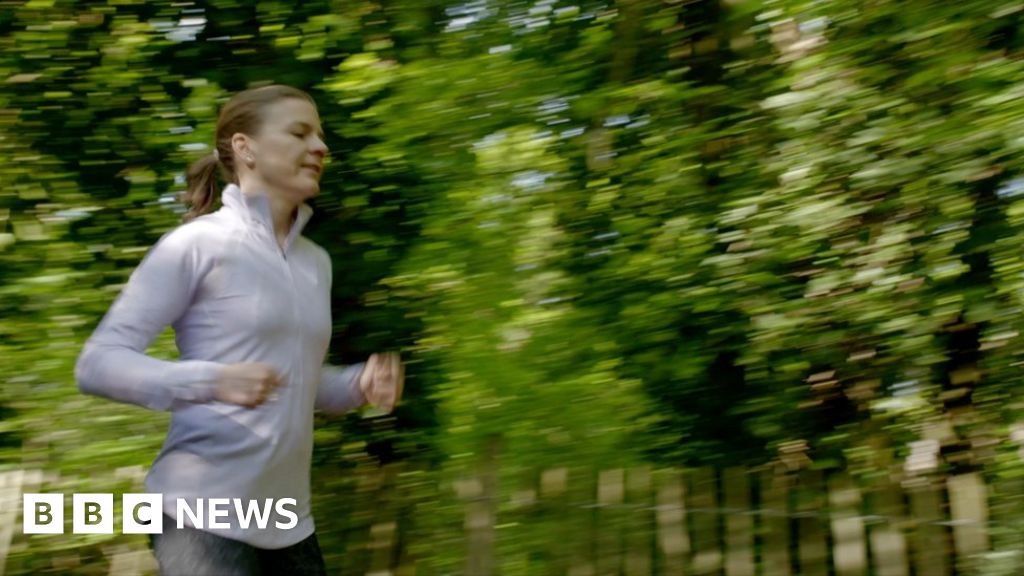 'I was addicted to exercise'

When does something healthy, such as exercise, become an unhealthy obsession? And can apps make things worse?

"When I run, I feel like I'm achieving something," the amateur athlete says. "I'm getting faster, stronger. It's like a series of small victories."

Ten years ago, Valerie began jogging to improve her fitness. She signed up for a 5km (three-mile) run, followed by 10km races, then a marathon. But soon she was getting up early each morning to train - and prioritising sport above all else.

"I started to realise that exercise controlled me, rather than me controlling exercise. That control quickly became an obsession," she says.

"It's had a big impact on my work, my family - every aspect of my life. Over time, exercise became unhealthy."

As the addiction grew, Valerie became increasingly isolated from those closest to her.

"It's damaged my relationships," she says. "Some people just didn't understand or see why I had to exercise. They saw me as a bit crazy."

Showing up late, rescheduling and cancelling became the norm. Valerie would arrange to meet up with friends on the condition they play squash or swim together, relaxing only when she had met her physical target for the day.

"They thought I didn't want to see them," she says. "I did but I had to train a lot beforehand or I would feel very guilty. It was like a constant trade-off."

Her obsession with exercise affected other significant relationships too.

"I could never rest. I was always escaping. I never wanted to spend time at home," she says.

"All I wanted to do was show that I was a superhuman who was totally in control - I couldn't show how difficult it was for me emotionally."

After years of pushing her body and her mind to their maximum, Valerie became depressed, burned out and in need of recuperation. She took four months off work to recover.

Psychologists say exercise addiction falls under the category of behavioural addiction, in which a person's behaviour becomes obsessive, compulsive, or causes dysfunction in a person's life.

It is thought to affect about 3% of people, rising to 10% among high-performance runners.

Typically, those most vulnerable are amateur athletes, such as Valerie, seeking relief from internal distress, says consultant psychologist Dr Chetna Kang, from The Priory Hospital in north London.

"Often people come to a clinic with a relationship breakdown, anxiety, depression… but as you start to unpick that, you realise exercise is the culprit," Dr Kang says.

"It's not extremely common but it's becoming more so."

What is exercise addiction?

Dr Caz Nahman is a consultant child and adolescent psychiatrist who specialises in eating disorders - excessive exercising occurs often in her patients.

Symptoms of over-exercising include injuries such as stress fractures, tendinitis and a low immune system.

Women are at risk of what's known as the "female athlete triad", which includes loss of menstruation, osteoporosis and eating disorders. For men, intense exercise has been shown to decrease libido.

Martin Turner, a sports and exercise psychologist at Manchester Metropolitan University, has worked with and studied athletes for 10 years and regularly comes across people consumed by their athletic identity.

"Running is now part of who you are. If you don't run, who are you?"

"There are three main reasons these beliefs are illogical," he says.

"First, they hinder wellbeing rather than help it.

"Second, they reflect short-term and guilt-based motivation, where people run to avoid guilt, rather than running for its own sake.

"Third, they are not consistent with reality. You have to breathe, eat, hydrate and sleep. You don't have to run."

Withdrawing from the rush of adrenalin and endorphins released through sport can be particularly difficult.

For Valerie, attempts to reduce the amount of exercise she takes have had a strong impact on her wellbeing, often making her feel more restless. This, she says, keeps her locked in a vicious cycle.

"I feel really anxious when I can't train," she says. "I can't sleep, I get headaches. A day when I haven't been out exercising feels like I've been in prison, trapped."

Dialling down the amount of physical exercise she takes can be a challenge when surrounded by apps and wearable technology such as Strava, Garmin, FitBit and others.

"I love apps. I look at them every day, monitoring my pace, the volume of training I do, what progress I've made," Valerie says.

"You can get a lot of kudos, you see how you've improved and you can see what your friends are doing. But if I've got a marathon coming up and my friend is doing a lot more training, I feel pressure to get up to speed."

This access to data, sport psychologist Martin Turner says, can add to the obsession, becoming detrimental to recovery.

"Measurements give you an injection of self-esteem," he says. "The problem is that apps keep telling you you've fallen short. You're not as good as last time, you're not as good as your friend. You're constantly competing with others in a very outcome-driven way."

This is made worse if your self-worth is wrapped up with your exercise achievements, says Turner. "If my app tells me I have fallen short, and I also believe that 'when I fail, it makes me a complete failure', then this external judgement is even more problematic."

British Triathlon coach Audrey Livingstone says apps and wearables have led to an unhealthy attitude to exercise among the athletes she trains.

"Some of them don't enjoy what they're doing - they're too busy watching what other people are doing," she says.

"I tell them they just need to do better than they did last time. 'Concentrate on your own performance.'"

And advice must be offered very sensitively.

"I reduce the amount of work they do and take them into a recovery week. They don't like it, they question it, and some struggle with it," Ms Livingstone says.

"They just don't get why they need to rest sometimes."

As with any other addiction, breaking the cycle and moving towards recovery can be a lengthy and complicated process. Mr Turner believes the first step is to acknowledge the pattern.

"One of the things athletes must do is recognise their thoughts, motives and beliefs and challenge them," he says.

"Be realistic and be flexible - saying, 'If I don't train today, it is bad, but it certainly is not the worst thing in the world,' and recognising that 'just because I chose not to train, this does not make me a useless loser' is far more consistent with reality, and less damaging."

For Valerie, returning to a healthy balance of exercise and rest is a continuing challenge. Now, supported by loved ones, she believes she is on the road to recovery.

"Understanding that it has become an addiction takes a long time," she says.

"It's all about letting go, not being obsessed, learning not to control everything, saying, 'You don't need to be perfect.'"

Canadian physician Gabor Mate believes "all addiction is rooted in trauma" and we need to rethink our approach to it.

'Addiction is a response to emotional pain'