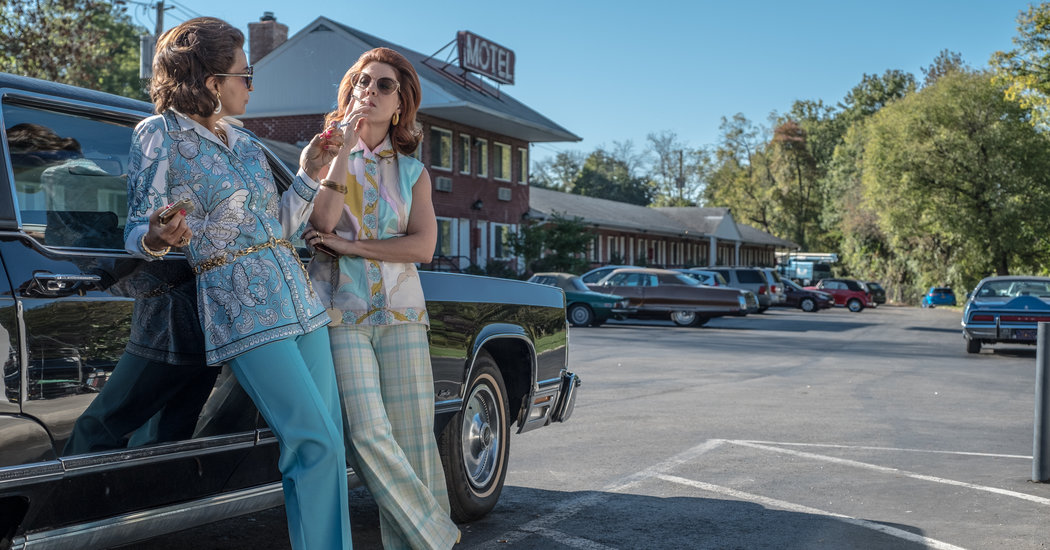 The women of “The Irishman,” Martin Scorsese’s somewhat true story of the mob hit man and Teamster, initially look sparkly and refreshing, an oasis in a desert of suit jackets. But their bloom and innocence are a mirage, these aging Barbie dolls in polyester pantsuits, dutifully getting rid of their husbands’ bloodstained shirts.

“The Irishman,” now streaming on Netflix, follows Frank Sheeran (Robert De Niro) from his entree into organized crime in 1950s Philadelphia — guided by his mentor, Russell Bufalino (Joe Pesci) — through his promotion to body man for Jimmy Hoffa (Al Pacino) in the ’70s. As Sheeran rises, so does the number of wiseguys in this epic tale.

“It was a lot of ties,” said Sandy Powell, a three-time Oscar winner for costume design, and practically a perpetual nominee. (Last season, she was up for both “The Favourite” and “Mary Poppins Returns.”) To handle the volume, Powell partnered with Christopher Peterson, who was a member of her team on two previous Scorsese movies.

“I do have a deep, deep love of men's wear,” Peterson said by phone from his New York home. “The language of how the tie greets the shirt greets the belt; the cut of the suit and how that translates across the years for each of these men, that was a real joy for me.”

He was like “a dog with a bone,” Powell said, calling from a costume house in Los Angeles, where she was pulling clothes for yet another Scorsese project. “If there were 5,000 suits hanging on a rack, he would look through them all, leaving no stone unturned.”

Most viewers figure out the time period in a film by looking at the women’s hemlines or hairstyles, but with so few of them onscreen, the size of a man’s collar or the shape of his tie became that much more important, Powell said.

“It’s those little subtleties that will drive you nuts. We’d line up the extras before shooting like it was a military inspection just to make sure we didn’t have anyone from the past or future hanging about.”

Here the costume designers explain how they dressed “The Irishman.”

The Housewives of Philadelphia

The movie’s backbone is a road trip taken by Sheeran, Bufalino and their wives, Irene and Carrie (Stephanie Kurtzuba and Kathrine Narducci). Riding in the back, the women sport similar Pucci-style polyester pantsuits with matching accessories and bouffants, stopping frequently to smoke.

“For these characters, the colors had to be bright but muted, like family Polaroids from the period,” Powell said. “You want them seen but not distracting.” And they needed to look a little dated, she added, wearing styles that reflected their “heyday” in the late 1960s, as opposed to the more modern looks of the ’70s, when the trip takes place. “You kind of hang onto your best time, don’t you?” she said.

A mix-up in scheduling led to a joint fitting for the actresses, and they continually exchanged items of clothing, like an “epic four-hour shopping trip the two characters might have taken together,” Peterson said. That idea clicked for the designers. “They were housewives, they probably went shopping together, so it made sense that they’d dress alike. But we’re talking about Philadelphia housewives, not New York, so they were always well turned out but it wasn’t Bergdorf Goodman.”

In flashbacks, we get to know the foursome better and how their relationships work. In one such scene, Bufalino comes home from “work” in the middle of night wearing a bloodstained shirt and looking exhausted. Carrie, who’s described in the movie as “Mafia royalty,” descends the stairs wearing a floor-length chiffon peignoir set with a synthetic lace bust. Without discussion, she offers to get rid of his clothes.

During filming, Narducci’s long robe kept getting caught on the stairs, Powell said, giving it an unintended billowing effect. In the lighting, she looks almost angelic.

“It does end up looking dramatic,” Powell said. “It was a strange little scene on its own, but the point of it was to show that she doesn’t bat an eyelash when he comes home covered in blood. She’s seen it all before, it’s what she does — clean him up and get rid of the evidence.”

The story begins to reach its apex amid a series of tense conversations involving Sheeran, Bufalino and Hoffa at a gala dinner to honor Frank. Flashes of sparkly beads and long legs — the evening’s entertainers — break up their exchanges.

For the showgirls, based on a group called the Golddiggers who performed at the real-life event with Jerry Vale, the designers fashioned white daisy-lace bell bottoms and bralettes with long, beaded fringe, care of a doorway curtain. Though he had his doubts, Peterson said the end result looked rich and effective. “They were hilarious and sexy and spoke to the period,” he said, with the added benefit of being cheap.

Natty Men and the ‘Capo’ Collar

Scorsese’s “Casino” (1995) was all about excess, his “Goodfellas” (1990) was a lot about menace and the street, but most of the men in “The Irishman” were fairly understated, still flying under the radar, Peterson said. “We kept coming back to this term ‘natty’ that was common at the time. It wasn’t flashy, but it wasn’t boring,” he added, explaining, “It meant you were paying attention to what you were wearing.”

But for men like Skinny Razor (Bobby Cannavale), a mentor to fledgling mobsters, the designers allowed themselves to dial it up a notch, modifying long, spear-point shirt collars they referred to as “capo” collars, as in a “caporegime” or a “made” member of a crime family. “They were a memory from Marty’s youth” in New York City, Peterson said. “When you saw that collar, you knew that was an important person not to be messed with.”

The challenge of dressing De Niro, now in his 70s, as a young man in his 30s was made easier by the period clothing, Powell said. In today’s men's wear, “he would have looked ridiculous,” but in the ’50s, the styles weren’t that far removed from generation to generation.

Pulling it off had “more to do with how they moved, their posture, than with the actual clothing,” she stressed. To help keep the actors from shuffling or slouching, Powell spent a lot of time working with a movement coach on set “who reminded them not to huff and puff while getting out of a car, that sort of thing. For the clothes, it’s how they wear them, how the clothes sit on them, so it was about nagging people to sit up straight,” she said.

“I did consider getting one of those devices that you attach to your shoulders that gives you an electric shock when you slouch, but I don’t think they’d have liked that much. Maybe a cattle prod?”