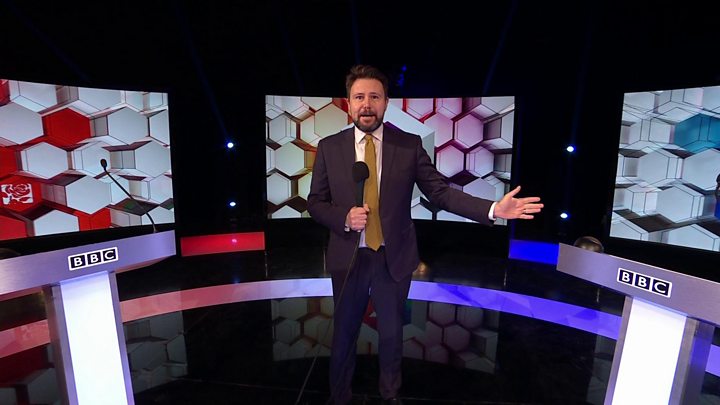 On Friday evening, the BBC will be broadcasting a live head-to-head debate between the Conservative and Labour leaders, Boris Johnson and Jeremy Corbyn.

The debate, which is taking place in Maidstone, is the last scheduled meeting between the two party leaders before next Thursday's general election.

The hour-long programme, hosted by Nick Robinson, starts at 20:30 GMT.

It will be televised live in the UK on BBC One and on BBC iPlayer, and streamed live on the BBC News website, where you can also follow the latest reaction and analysis on our live page. It will also be broadcast live on BBC Radio 5 Live and on the BBC Sounds app.

The programme will also be broadcast on the BBC News channel, with a half-hour preview programme starting at 20:00 and a reaction programme live from the "spin room" afterwards, including analysis from the Reality Check team.

Why should I watch it?

There is nothing to match the drama, the unpredictability and the choice-defining clarity of watching the two leaders who want to occupy No 10 in a week's time, going head-to-head in a live debate.

Margaret Thatcher didn't do it. Nor did Tony Blair. Neither did John Major or Theresa May. Prime ministers are always told not to risk giving their opponents the equal billing and status they crave.

For all the talk about what he won't do, Boris Johnson is the first prime minister to agree to a head-to-head debate with his opponent.

Gordon Brown did agree to a TV election debate but in his case it was not with one but two opponents - David Cameron and Nick Clegg. As prime minister in 2015, David Cameron appeared with six other party leaders.

While the world of social media allows news outlets and politicians to reach the general public faster than before, over the years we have witnessed a changing balance between the perceived risks and opportunities.

The leaders will have prepared vigorously. Every answer, pause, and raising of the eyebrow will be scrutinised in real time.

Political strategists, who were once worried about how their candidate would appear to the millions watching live, are now also concerned that a clip, only a matter of seconds long, edited in a disingenuous way could be watched by more people than the original broadcast.

There is less than a week to the polls, and audience interest is at its peak. This debate will give people who don't usually engage with politics the chance to watch the leading candidates to be our next prime minister face questions from our live audience and the general public.

Boris Johnson became prime minister in July. Educated at Eton and then Oxford University, he worked as a journalist before entering politics in 2001. He was an MP for the Tory safe seat of Henley for seven years, until he was elected as Mayor of London in 2008. After serving two terms as mayor, he was re-elected as an MP in 2015, this time for Uxbridge and South Ruislip.

Mr Johnson was a leading figure in the Vote Leave campaign during the 2016 EU referendum. He went on to serve as foreign secretary in Theresa May's government for two years from 2016-2018, before quitting over her Brexit policy.

Jeremy Corbyn was elected as Labour leader in September 2015, after 32 years as a backbench MP. Brought up in Shropshire, Mr Corbyn went on to become a trade union organiser and a councillor in Haringey in London.

In 1983, he was elected as MP for Islington North. Over the next 30 years, he gained a reputation as a champion of controversial causes, and as a left-wing critic of his own party, voting against the Labour government 428 times. During the 2016 EU referendum Mr Corbyn campaigned for Remain, and afterwards survived an unsuccessful attempt by his own MPs to oust him.

In the 2017 general election, Labour surprised many by gaining their highest vote share since 1997 and denying the Conservatives an outright majority .

What are the parties promising you?

Here's a concise guide to where the parties stand on key issues, including Brexit, education and the NHS.

Which issues are most likely to come up?

Brexit: Perhaps one of the most talked-about issues of this election. The two leaders clashed on Brexit in their previous debate and they are likely to again. The Conservatives have pledged to "get Brexit done" and leave the EU by 31 January. The Labour Party is promising to "get Brexit sorted" in six months by renegotiating Mr Johnson's deal with the EU and then putting that to a public vote. You can find out more about where the parties stand on Brexit here.

The NHS: Another key issue of this election. Both parties agree the National Health Service needs more money but they have clashed over whether it will be part of any post-Brexit trade negotiations with the US. Labour says the NHS is at risk because of the Conservatives' plans. The Tories say these claims are "nonsense". You can read more about promises on the NHS here.

Security: The debate takes place just a week after the London Bridge attack, in which two people were killed. Questions on this incident, the response of the leaders, UK security and tougher sentences for violent offenders are likely.

Racism: Both the Conservatives and Labour have had internal rows over claims of racism - the Tories over allegations of Islamophobia and Labour amid claims of anti-Semitism.

Climate change: There have been a number of "green" pledges in this election so far, so this is another issue on which the leaders are likely to be quizzed. The Conservative government has committed to cutting emissions to zero by 2050. Labour wants to reduce emissions "substantially" by 2030.

How are the questions and the audience selected?

The editorial team will pick the questions, with the aim of reflecting the issues that matter to the public and feature prominently during the election campaign.