Corbyn: Treasury document proves there will be N Ireland checks 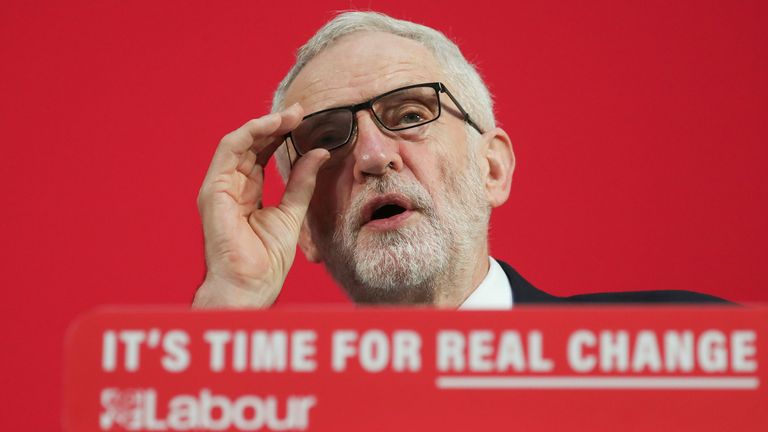 Corbyn: Treasury document proves there will be N Ireland checks

Jeremy Corbyn says he has obtained a confidential Treasury report which "drives a coach and horses" through Boris Johnson's claim there will be no Irish Sea border after Brexit.

Waving the document, entitled NI Protocol: Unfettered Access To The UK Internal Market, Mr Corbyn said it was proof there will be customs checks between Great Britain and Northern Ireland after Brexit.

Mr Johnson has denied this, saying it is "complete nonsense" to suggest his Brexit deal will lead to customs checks.

Revealing the document, Mr Corbyn said: "What we have here is a confidential report by Johnson's own government, marked 'official, sensitive', that exposes the falsehoods that Boris Johnson has been putting forward.

"This is cold, hard evidence that categorically shows the impact a damaging Brexit deal would have on large parts of our country."

But Mr Johnson was insistent the only checks would be on goods going between Northern Ireland and Ireland.

Mr Johnson told Sky's Kate McCann: "This is a vast improvement on the original deal.

"Any parts that the people of NI don't like they can vote to align themselves with the EU on those issues. This is a great deal that allows everyone to move on."

Asked if he either does not know his own government's policy or if he is lying, Mr Johnson said: "There will be no checks on goods from GB to NI or NI to GB.

"The only checks will be on goods going via NI to Ireland, everybody understands that."

James Cleverly, responding on behalf of the Conservative Party, said the document does not back up Mr Corbyn's wild conspiracy theories" and said it showed "he simply cannot be trusted".

Analysis: 'This leak may be significant but it may well not change votes'

The new leak of an internal government presentation from Labour may be the most significant document to enter the public domain during this campaign, and perhaps the most important leak since "Yellowhammer" no deal planning documents.

The most controversial element of the prime minister's revised Brexit deal, struck in mid October, relates to Northern Ireland.

However, the exact nature of those ties - and the consequences both for citizens and businesses in Northern Ireland that flow from them - have been shrouded in mystery and confusion.

But, the people of Great Britain rarely seem to vote on Northern Irish matters.

The fact the Northern Ireland has not had a functioning devolved administration for over two years has barely featured in the British conversation about the election, even if it rightly dominates in Belfast.

They have separate political parties, meaning that Westminster politicians feel little electoral pressure about what happens in our own country on the other side of the Irish Sea.

So, however significant the documents today are, it may well not change many votes in next week's general election.