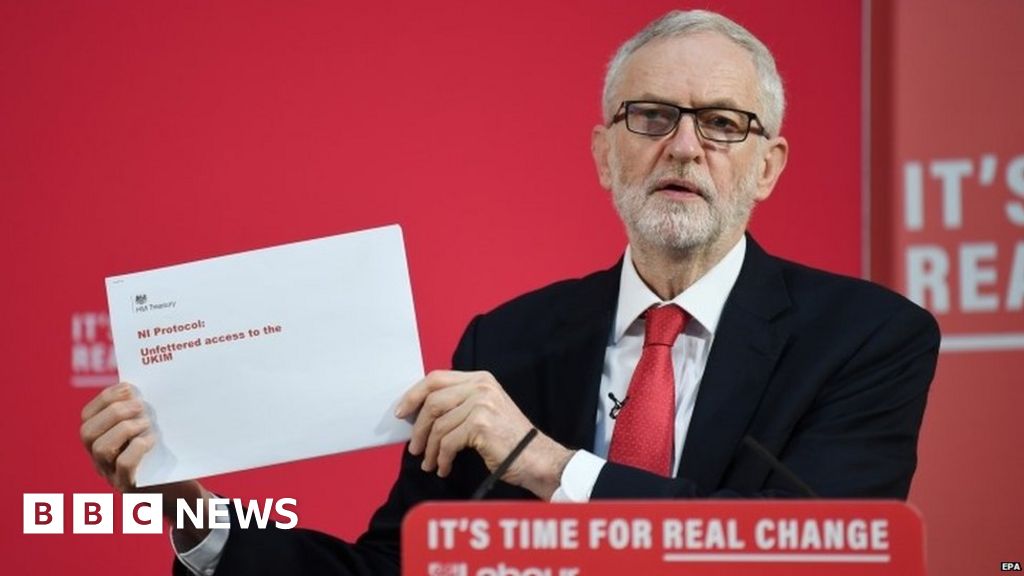 Jeremy Corbyn has said a leaked document obtained by Labour shows Boris Johnson is "misrepresenting" his Brexit deal and the "devastating" impact it will have on Northern Ireland.

He called the paper "hard evidence" NI would be "symbolically separated" from the rest of the UK after Brexit, with customs checks on goods.

Mr Johnson has repeatedly said there will be no border in the Irish Sea.

Pressed on the issue during a campaign visit in Kent, the prime minister said his was a "fantastic deal" and the only checks would be on British exports to the Republic of Ireland going via Northern Ireland.

The row comes as the leaders prepare for the last TV debate of the election on BBC One on Friday at 20:30.

Ahead of the encounter, Labour sought to increase the pressure on the prime minister, who has claimed his agreement with the EU on the terms of the UK's withdrawal will "get Brexit done" by 31 January.

Mr Johnson has said the whole of the UK will leave the EU at the same time "entire and perfect" and that there will be no checks on any goods moving from Northern Ireland to the rest of the UK.

At a press conference in London, Mr Corbyn said the 15-page Treasury document - titled Northern Ireland Protocol: Unfettered Access to the UK Internal Market - disproved this and showed Mr Johnson's claims about his own deal were "fraudulent".

The analysis in this leaked document matches that published in a government risk assessment in October.

The initial study said the PM's deal could mean a reduction in business investment, consumer spending and trade in Northern Ireland. But this time the language is even blunter and confirms the worst fears of unionists.

It concludes that the deal would see "Northern Ireland symbolically separated from the Union."

And it once again suggests the government has not been straight about the extent of new red tape on trade across the Irish Sea. Page one of the document says "at a minimum exit summary declarations will be required when goods are exported from NI to GB".

The prime minister has repeatedly said those declarations would not be required.

"What we have here is a confidential report by Johnson's own government, marked official, sensitive, that exposes the falsehoods that Boris Johnson has been putting forward," he said.

"This is cold hard evidence that categorically shows the impact a damaging Brexit deal would have on large parts of our country, 15 pages that paint a damning picture of Johnson's deal on the issue of Northern Ireland in particular."

As well as customs and security checks on goods moving from Great Britain to Northern Ireland, he said goods moving the other way would be subject to regulatory and rules of origin checks and potentially tariffs - which would force up prices and be highly "disruptive".

"This drives a coach and horses through Boris Johnson's claim that there will be no border in the Irish Sea."

Before he succeeded Theresa May as prime minister, Mr Johnson told the annual conference of the Democratic Unionist Party in 2018 that no UK government could agree to any border in the Irish Sea.

Mr Corbyn said this showed Mr Johnson's word could not be trusted.

But Mr Johnson stood by his "no checks" claim, telling journalists his agreement offered "unfettered access" to the British market for Northern Ireland businesses and the Stormont Assembly would have the final say on whether it remained aligned with the EU after four years.

He said his agreement was superior to predecessor Theresa May's, which he said would have "carved out" Northern Ireland and seen it remain in the EU "for all sorts of purposes".

A government risk assessment published in October said it would lead to new administration and checks on goods from west to east.

But Mr Johnson has insisted Northern Irish businesses will not be hit with additional paperwork or fees, telling a BBC phone-in during the campaign that "we will make sure that businesses face no extra costs and no checks for stuff being exported from NI to GB".

Mr Corbyn said Labour's promise of another referendum within six months of his winning power would "end the division" over Brexit as well as protecting jobs and the peace in Northern Ireland.

Under Labour's plans, voters would get to choose between a "credible" renegotiated Leave deal, including a customs union with the EU and a close single market relationship, and staying in the EU under current terms.

However, Mr Corbyn again declined to say which way he would vote - saying he would not "take sides" so he could faithfully carry out the result. In contrast, his chief Brexit spokesman Keir Starmer said he would campaign against the new deal Labour negotiated and back remain.

Conservative cabinet minister Michael Gove said what Labour was offering was a choice between Remain and "Leave lite".

He also criticised the opposition's plans to allow three million EU nationals living in the UK to vote, whch they were not able to do in 2016. Changing the franchise to try and boost one side was a "fundamental assault" on democracy, he told the BBC.