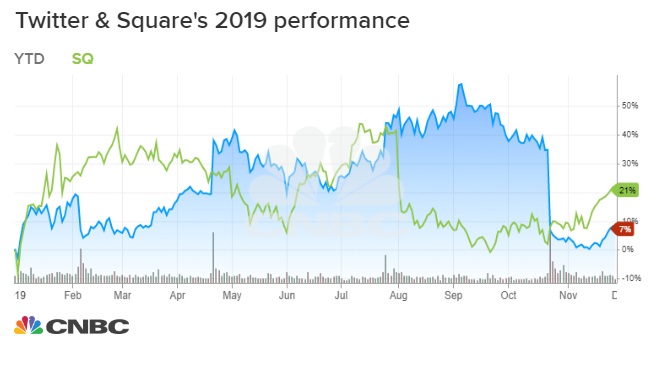 Jack Dorsey, co-founder and chief executive officer of Twitter Inc., speaks during an interview in New York, U.S., on Monday, May 1, 2017.

Jack Dorsey's stated plan to move to Africa for up to six months is dividing Square and Twitter analysts.

The CEO of both companies said in a tweet last week that he plans to move to the continent for as long as six months. Payment analysts say the opportunity for Square could be tremendous, but they question who will run daily operations. For Twitter, it comes in an election year in which social media companies will likely face increased scrutiny.

Dorsey has already been in Africa for the past month, reportedly meeting with crypto entrepreneurs in Nigeria. He did not say which country he plans to live in.

Africa is 'the future of payments'

"I can see products like Square's merchant working capital, and the ability to purchase bitcoin and do fractional investing, having significant applicability in Africa," Ellis told CNBC. "Someone still has to 'mind the store' at home, though."

The region represents the "future of payments," according to Macquarie senior payments analyst Dan Dolev. The move could be "very forward thinking" and an opportunity to learn that market in depth, he said. Dolev is also confident that Dorsey can manage both companies remotely.

"This could provide them with a strong perspective on Africa, and a first-mover advantage in a market that will likely be very dominant in payments over the next decades," Dolev said. "I don't see any issues, only opportunities."

Still, investors will likely question how Dorsey will manage the day-to-day operations of Square while he is traveling. Ellis thinks he would likely need to name an interim president or COO of Square. It's not clear who is the heir apparent and Square declined to comment on the move beyond Dorsey's tweet.

In the tweet, Dorsey also mentioned bitcoin. The company has leaned into cryptocurrency, launching a dedicated crypto division of Square earlier this year.

For Twitter, the timing could be tough. The U.S. is entering a presidential election year in which social media companies will likely face scrutiny for their role in influencing politics. Dorsey's absence could become a "lingering concern" for Twitter investors if Dorsey focuses on initiatives like bitcoin — especially during a year "in which the company finds itself in the middle of the potential political firestorm," according to Dan Ives, managing director and equity research analyst at Wedbush Securities.

"The Africa tweet raises eyebrows for investors as Dorsey is the CEO and visionary for Twitter at a time the company needs him at the helm," Ives said. "Dorsey has proven he can handle being CEO of two public companies which is a feat in itself, but investors are focused on Twitter further monetizing its advertising platform at a pivotal juncture which will make Dorsey's African trip a scrutinized one by the Street if there is any speed bump."

Wall Street has been hesitant about the long-term viability of a two-company track for Dorsey. The 42-year-old founded Square in 2009, three years after starting Twitter. He has led as CEO of Square since day one but his job at Twitter has been less consistent, moving in and out of the executive chairman role in the past decade. Dorsey took over as CEO for a second time in 2015 after Dick Costolo's departure, and what was announced as an interim leadership role became permanent. Shares of Square are up 20% this year, while Twitter is up about 5%. Both stocks are down roughly 3% year over year.

Any challenges Dorsey faces going forward would be "compounded if he is nine time zones away," said Michael Pachter, equity research analyst at Wedbush.

"He should either be a CEO or should be a world traveler — but don't think the two mesh together well," Pachter said.

Yale School of Management's Jeffrey Sonnenfeld said in order for Dorsey to leave the country for six months, he would have to formally go on leave and name an acting CEO — or at least a chief operating officer — for each company. There are also "constant" strategic, technological and financial decisions to be made on a regular basis that can't be done remotely.

"Proximity matters for leading a company," Sonnenfeld said. "Jack would be reckless and ego-maniacal as well as the board irresponsible and negligent, violating their duty of care under Delaware law, to let the CEO just go AWOL."

"A one-month break can be pushing it for emotional/personal R&R or intellectually recharging batteries and doing some market research, but six months is abdication," he said.