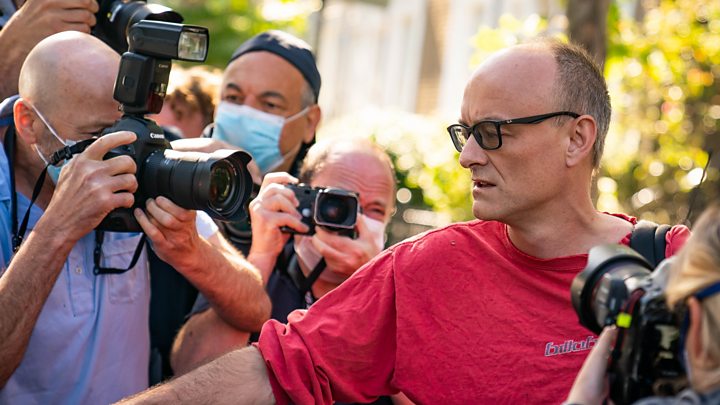 The PM's decision to back his chief aide's lockdown trip to Durham has sparked fears that the government's coronavirus message will be undermined.

Some Tory backbenchers have called for Dominic Cummings to resign to ensure public confidence in future measures.

The row comes as plans to further ease lockdown restrictions will be discussed at a cabinet meeting later.

Education Secretary Gavin Williamson has said Mr Cummings "at no stage broke the law or broke the rules".

Speaking on BBC Radio 4's Today programme, Mr Williamson said that everyone, "whether they are anywhere in the country or working in No 10", was expected to abide by the law.

Criticism of Boris Johnson's decision to take no action over Mr Cummings' 260-mile trip to his parents' home has come from all quarters.

As well as Tory backbenchers, senior Church of England bishops and scientists advising ministers on the pandemic have strongly criticised the government's handling of the row.

Labour has called for an inquiry.

Mr Johnson has defended Mr Cummings, saying he believed his senior aide had "no alternative" but to make the journey from London at the end of March for childcare "when both he and his wife were about to be incapacitated by coronavirus".

At Sunday's daily briefing, the prime minister also confirmed the phased reopening of England's primary schools will begin on 1 June.

The prime minister is this week expected to set out details of plans to ease restrictions, which will reportedly include information about the reopening of some non-essential shops in June.

Instead, the prime minister refused to answer the questions that remain about the specifics of his adviser's visit or visits, to the north east of England while his team was telling the public again and again and again that they had to "stay at home".

Conservative backbencher David Warburton, MP for Somerton and Frome, said Mr Cummings was "damaging the government and the country that he's supposed to be serving".

Speaking on BBC Breakfast, Mr Warburton said: "We've not been offered the chance to interpret the rules, that's really not how it works otherwise there would be complete chaos."

The MP, who said his own father had died alone as a result of the coronavirus lockdown, said "people have made sacrifices" and "in those sacrifices there really hasn't been the choice to use instinct".

He added: "We've been tasked with following regulations laid down by the government."

Another Tory MP, Jason McCartney, said in a Facebook post that while it was important for people to show compassion during the crisis, Mr Cummings had to go because the "perceived hypocrisy of the rule makers potentially threatens the success of any future measures" under a second wave of coronavirus.

Meanwhile, the acting Lib Dem leader said on BBC Breakfast that the prime minister should sack Mr Cummings "so the government has more credibility in what it says about public health".

"The instruction the prime minister gave us all to stay at home has been breached by his top adviser and that's what you can't get away from in this story, its pretty simple," Sir Ed said.

And Ms Sturgeon told the programme that the prime minister was "putting his political interest ahead of the public interest".

"When trust in a public health message and public health advice is as important as it is right now the consequences could be very serious," Scotland's First Minister said.

Former chief constable of Durham Police, Mark Barton, said the prime minister's decision has "now made it exponentially tougher for all those on the frontline enforcing the lockdown".

"We're in the middle of a national emergency and the people who make the rules can't break the rules otherwise we're going to have chaos," he said.

Some of the scientists that advise ministers were concerned the prime minister's decision to back Mr Cummings would undermine the message on controlling the virus.

As one of those involved in SPI-B, the Government advisory group on behavioural science, I can say that in a few short minutes tonight, Boris Johnson has trashed all the advice we have given on how to build trust and secure adherence to the measures necessary to control COVID-19.

The prime minister said he held "extensive" discussions on Sunday with Mr Cummings, who he said "followed the instincts of every father and every parent - and I do not mark him down for that".

The Observer and Sunday Mirror reported two further allegations of lockdown breaches by his aide, although Mr Johnson called "some" of the claims "palpably false".

Labour leader Sir Keir Starmer said he would have sacked Mr Cummings if he were prime minister, and he said Mr Johnson's failure to to take action was "an insult to sacrifices made by the British people".

It comes as an investigation has been launched into a tweet posted on the official UK Civil Service Twitter account, which asked "Can you imagine having to work with these truth twisters?"