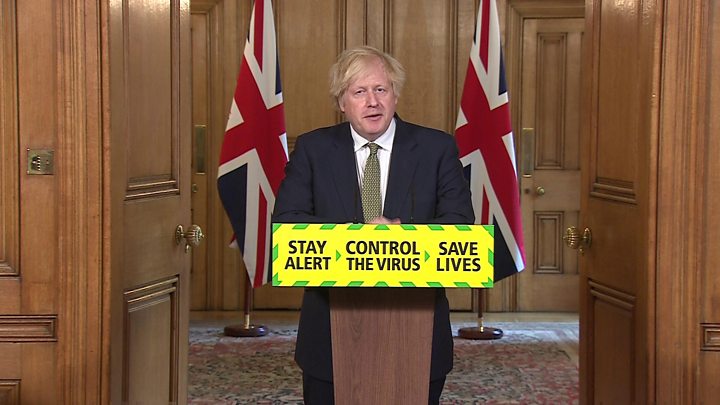 The cabinet is to meet later to discuss the further easing of the coronavirus lockdown as Boris Johnson continues to be engulfed by claims his senior aide Dominic Cummings breached the rules.

The prime minister is this week expected to set out details of plans to lift restrictions.

But some Tory backbench MPs say the row has undermined the government's message and want Mr Cummings to resign.

Mr Johnson has defended his aide, who had travelled from London to Durham.

Speaking at Sunday's Downing Street briefing, the prime minister said he believed Mr Cummings had "no alternative" but to make the journey at the end of March for childcare "when both he and his wife were about to be incapacitated by coronavirus".

At the press conference, Mr Johnson's also confirmed the phased reopening of England's primary schools will begin on 1 June.

The plans to be outlined by the government will reportedly include information about the reopening of some non-essential shops in June.

However, BBC political correspondent Iain Watson said Mr Johnson is finding it difficult to shift the political focus away from his key adviser.

Those criticising the prime minister include scientists on key government committees.

Instead the prime minister refused to answer the questions that remain about the specifics of his adviser's visit or visits, to the north east of England while his team was telling the public again and again and again that they had to "stay at home".

Mr Johnson said he held "extensive" discussions on Sunday with Mr Cummings, who he said "followed the instincts of every father and every parent - and I do not mark him down for that".

The Observer and Sunday Mirror have reported two further allegations of lockdown breaches by his aide, although Mr Johnson called "some" of the claims "palpably false".

Labour has called for an urgent inquiry into the allegations against Mr Cummings and party leader Sir Keir Starmer said he would have sacked him if he were prime minister.

He said Mr Johnson's failure to to take action was "an insult to sacrifices made by the British people".

Sir Keir said: "This was a huge test of the prime minister and he has just failed that test.

"Millions of people across the country have made the most agonising choices - not visiting relatives, not going to funerals - they deserve better answers than they got from the prime minister."

But Sir Roger Gale is among the Conservative backbench MPs to have publicly questioned Mr Cummings' position, telling BBC Radio 5 Live: "It's up to the prime minister to exercise judgement about who he has around him. In this case, I do think that that judgement is flawed."

Another Tory, former minister Paul Maynard, said of Mr Cummings: "It is not as if he was unfamiliar with guidance he himself helped draw up. It seems to me to be utterly indefensible and his position wholly untenable."