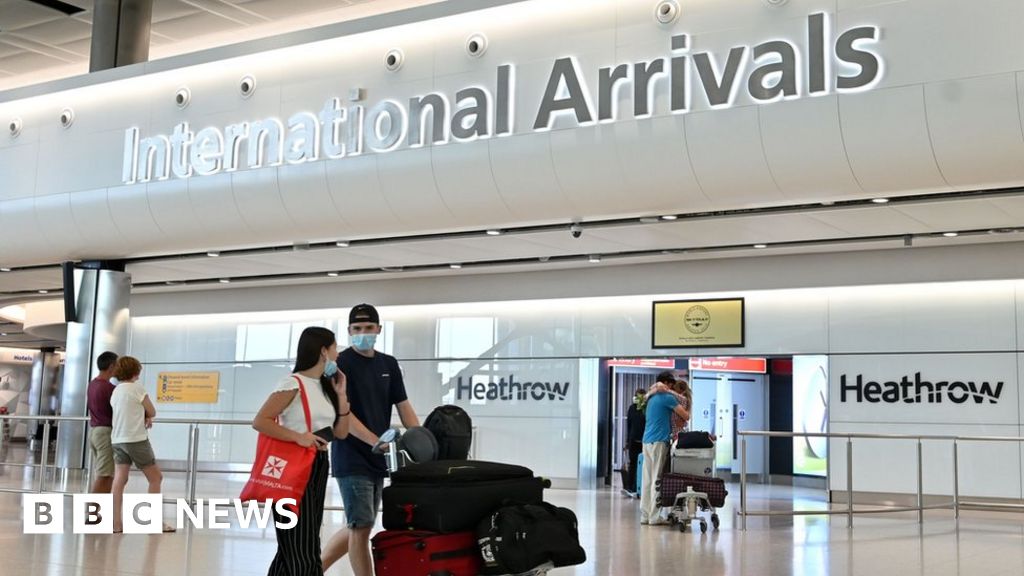 People arriving in the UK must self-isolate for 14 days from 8 June to help slow the spread of coronavirus, the government has said.

Travellers will need to tell the government where they will quarantine, with enforcement through random spot checks and £1,000 fines in England.

Home Secretary Priti Patel said the measure would "reduce the risk of cases crossing our border".

The requirement will also not apply to those travelling from the Republic of Ireland, the Channel Islands and the Isle of Man.

According to the Home Office, the new policy will be in place across the UK, although how it is enforced in Scotland, Wales and Northern Ireland will be determined by the devolved administrations.

If a person does not have suitable accommodation to go to, they will be required to stay in "facilities arranged by the government".

So-called "air bridges" - agreements with countries that have low infection rates allowing tourists to travel without quarantining - will not be in place initially, the government said.

The new measure, which was previously announced by Prime Minister Boris Johnson but the details of which were revealed on Friday, will be reviewed every three weeks once it is introduced.

But airlines have said a quarantine requirement would "effectively kill air travel" - and one airport boss described the plans as a "blunt tool".

The government currently recommends international travel only when absolutely necessary, and nobody should travel if they display any coronavirus symptoms.

What does the new system involve?

Passengers arriving in the UK will be required to fill out an online locator contact form - providing details of where they will spend their 14 days in self-isolation.

The Home Office said the proposed accommodation will need to meet necessary requirements, such as a hotel or a private address with friends or family.

There will be a fine of £100 for failure to complete the form, and the Border Force will have the power to refuse entry to non-UK citizens who do not comply with the new regulations.

New arrivals will be told they may be contacted at any time during their quarantine and, in England, may be visited by public health authorities conducting spot checks.

They will be told to avoid public transport and travel to their accommodation by car "where possible", and not to go out to buy food or other essentials "where they can rely on others".

In England, a breach of self-isolation would be punishable by a £1,000 fixed penalty notice, or prosecution and an unlimited fine for persistent offenders.

A full list of exemptions to the new requirements will be published by the government. They include road haulage and freight workers, medical professionals travelling to fight Covid-19, and seasonal farm workers who will self-isolate where they are working.

The big question being asked about quarantine is: why now?

The government argues that it simply wouldn't have made enough of a difference while the virus was spreading widely within the UK.

But it hasn't, so far, fully explained why such a blanket measure was not introduced much earlier in the outbreak, before the virus took hold.

People returning from Wuhan city and Hubei province in China were put into isolation for 14 days from late January.

Later, those returning from Italy were told to self-isolate.

But the measure was not extended to travellers from every country.

There are also questions about how this will work in practice and what it will mean for the travel industry, which is already suffering huge losses.

The home secretary said the new measures aim to "keep the transmission rate down and prevent a devastating second wave".

She added: "I fully expect the majority of people will do the right thing and abide by these measures. But we will take enforcement action against the minority of people who endanger the safety of others."

The number of people who have died with coronavirus in the UK has reached 36,393 - a rise of 351 on Thursday's figure.