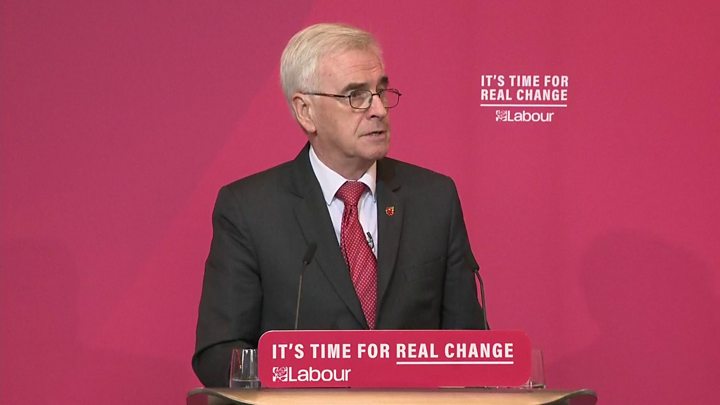 A spending row has broken out after the Conservative Party published what it claims would be the cost of a Labour government over five years.

The report, compiled by the party and not the Treasury, is based on a number of commitments from Labour's annual party conference but not its manifesto.

Chancellor Sajid Javid said Labour's proposals would leave the UK "on the brink of bankruptcy".

The Conservatives claim that Labour's policies would cost £1.2tn over the course of the next five years, if the party wins next month's general election.

The figure is based on costing Labour's 2017 manifesto and other pledges it has made since then.

But the Labour Party has yet to publish its 2019 election manifesto, detailing its policies and spending proposals.

Senior Labour figures will meet next weekend to decide which policies passed by the party's annual conference will become manifesto proposals for government, with some unlikely to make the cut.

How accurate are the claims?

There are problems with the Conservative Party's approach.

As Labour has not yet published its election manifesto, previous pledges may well be dropped, while new ones could still be added.

That makes the job of accurately costing election pledges, at this stage of the campaign, impossible.

Just because certain policy positions passed at the Labour conference, there is no guarantee they will be adopted in the upcoming manifesto.

There is also an issue with some of the costing. For example, the Conservatives cost Labour's renationalisation plans at £196bn. This is based on a Confederation of British Industry estimate, which was itself the subject of criticism.

But it is certainly true that Labour wants to spend a lot more - something it has been upfront about.

Shadow chancellor John McDonnell says he wants to more than double UK investment spending to an extra £55bn a year.

However, the Institute for Fiscal Studies has called into question where such an immediate increase in investment spending could be achieved.

Mr McDonnell branded the Conservative report a "ludicrous piece of Tory fake news" and an "incompetent mish-mash of debunked estimates and bad maths, cooked up because they know Labour's plans for real change are popular".

He added: "The Conservatives will be able to read all about these plans - and how much they actually cost - when we publish our fully-costed manifesto."

The publication of the Conservative document comes after civil service head Sir Mark Sedwill blocked a Tory plan to use civil servants to cost the Labour Party's fiscal plans in a separate report.

This document is political rather than financial. The Conservatives' aim is to frame Labour's plans not as ambitious, but as unaffordable.

But the dossier assumes that all Labour's policies are firm commitments, and it does not examine Labour's revenue raising measures.

John McDonnell has made no secret that Labour intends to borrow more than the Tories to invest - his political argument is that this would both grow the economy more rapidly and increase the state's assets - not just its liabilities.

So, in the end, the calculation voters are likely to make is about who they trust more to run the economy.

Speaking about Labour's plans in Liverpool on Thursday, Mr McDonnell promised "investment on a scale never seen before" to overhaul infrastructure in all areas of the UK.

The shadow chancellor said he wanted to transfer power and money out of the south-east of England - and will fund his plans through borrowing.

He said his party would introduce new fiscal rules, meaning "borrowing for investment" would not be included in borrowing targets.

The Tories have also vowed to borrow to fund more spending, rewriting their current financial rules.

Do you have any questions about the general election?